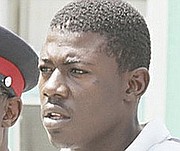 THE Court of Appeal yesterday quashed the 27-year sentence of a man who was accused of robbing and killing another man in Exuma seven years ago.

He appealed his case on the grounds that a confession statement admitted in court was not given or signed by him and that he was oppressed by police during questioning.

His appeal was granted almost one year after his co-accused had his 20-year manslaughter sentence overturned by the panel for the same crime.

In 2014, Giordano Rolle Jr and his co-accused Demetri Rolle were said to have stolen a gold chain, gold watch and a sum of cash from Dwayne Nixon before fatally shooting him in his Exuma residence.

In March 2017, a jury unanimously convicted Rolle Jr of murder, and by a verdict of 10-2, the jury also convicted him of armed robbery. A year later, the appellant was sentenced to 27 years imprisonment for murder and 12 years for armed robbery. Both sentences were ordered to run concurrently and took effect from the date of his conviction.

Rolle Jr recently appealed his sentence after arguing that the conviction was “unsafe and unsatisfactory” as the judge had erred in law when she “wrongfully exercised her discretion by ending the voir dire and admitting the record of interview” into his case.

Yesterday, Justices Maureen Crane-Scott, Roy Jones and Milton Evans quashed the appellant’s conviction after ruling the facts of the case left them with “lurking doubts” regarding the fairness of Rolle Jr’s trial.

According to their judgement, the evidence presented against Rolle Jr consisted of “adverse statements” which were allegedly made in response to police questioning and then recorded in a record of interview. The panel said during the proceedings, the prosecution also produced a signed confession which police alleged was taken from the appellant right after their interview with him.

“Before the Crown’s evidence was led before the jury, counsel for the appellant challenged the admissibility of the statements on the ground that the statements attributed to the appellant were obtained by oppression and further, that the signatures which appeared on the record of interview and confession statement respectively, were not his,” the court documents read.

“The judge commenced a voir dire to investigate the issues. However, after the appellant had testified, the judge prematurely terminated the voir dire inquiry being of the view that the issue of voluntariness was no longer in issue because during his cross-examination, the appellant had admitted that the confession statement was not made or signed by him.”

The justices said during the voir dire, it was also revealed that a video recording of Rolle Jr’s interview, in which the record of interview and caution statement had been obtained, had not been disclosed to the defence.

After this issue was brought to the judge’s attention, the DVD of the recorded police interview was handed over to Rolle Jr’s counsel. By that time, the voir dire was already in progress since his attorney had already finished his cross-examination of one of the police investigators and was half-way through cross-examining the other.

“On learning of the DVD, the judge repeatedly indicated her unwillingness to adjourn the matter and, in the end failed to redress the obvious prejudice to the defence by, for example, ordering a short adjournment to permit defence counsel the opportunity to view the video-recording or to recall witnesses who had testified,” the panel noted.

“In due course, when the main trial resumed, both impugned documents were given in evidence before the jury. Ultimately, the jury found the appellant guilty of murder and armed robbery.”

In their judgement, the justices said that after they gave “anxious consideration to the submissions and all the circumstances of the case,” they were “left with lurking doubts about the fairness of the appellant’s trial and the safety of his conviction.”

“The appellant denied having authored or signed the record of interview or the written confession. Undoubtedly, his denial raised issues of fact for the jury’s determination. However, that was not the appellant’s only claim. This was a case where the appellant also alleged that both documents attributed to him were involuntary and inadmissible due to the police oppression which had immediately preceded the interview where they were obtained.

“That allegation and the appellant’s testimony, clearly also raised for the judge’s determination the crucial issue of voluntariness of both documents which could not be overlooked, and which required a ruling from the judge as to admissibility. Given the appellant’s various claims, the mere fact that the appellant had admitted in cross-examination that he did not give any information to the police and had not signed either document, did not entitle the judge to prematurely terminate the voir dire on the basis that those were factual issues for the jury and that there was accordingly, no longer any need for a voir dire.’

In her closing statements Justice Crane-Scott stated: “For all these reasons we allow the appellant’s appeal. His conviction for murder and armed robbery are quashed, together with the associated sentences. We will hear the parties on whether this is an appropriate case to order a retrial. Written submissions on the appropriateness of ordering a retrial shall be filed on or before March 22.”