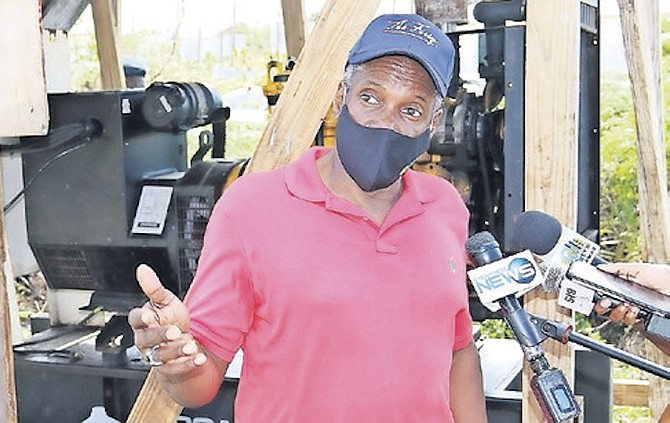 MINISTER of Works Desmond Bannister in The Farm shanty town in Abaco in February.

WORKS Minister Desmond Bannister yesterday promised “relentless” and “decisive” action will be taken in an Abaco shanty town before the end of this month.

“I am honoured that Cabinet has now given me a mandate with respect to that illegal housing community, The Farm, in Abaco,” he said during his mid-year budget contribution in the House of Assembly.

“Before the end of this month, you are going to see action starting and that action is going to be relentless to ensure, first of all, property of Bahamians is protected, their birthright; secondly, that the community is a safe community; (and thirdly,) that our water table is protected because we don’t know what is happening with our water table. The Minister of Agriculture has done studies and he has been very, very concerned. What I have seen concerns me.

Mr Bannister’s comments came as he was giving an overview of his ministry’s actions on various islands.

“My most unpleasant duty in Abaco,” he said, “was to go and look at the illegal housing community. There are legal manoeuvres in the court and there are several injunctions in place. One of those injunctions says that nobody is to build any illegal housing anywhere in The Bahamas, any unregulated housing.

“When I go into these unregulated communities, I see open septic tanks, open, with health hazards; you see wires running haphazardly, you see generators around the community. It’s frightening because you know what could happen. People could be electrocuted. You know there could be fires. At the time when we visited, there was a dead body, a man who was killed by the vapours from his generator.

This is the first time Mr Bannister has given a timeline for action with respect to The Farm.

In January, he told reporters the government was monitoring the construction of unregulated structures there, noting then that legal notices have been affixed to dwellings in the area.

He toured the area with a government delegation the next month, at the time pledging that the government will take the necessary action to deal with unregulated developments on the island.

Although it is not clear how many residents are currently living in The Farm, chairman of Treasure Cay local government Stephanie Hield has estimated that hundreds of illegal structures have been constructed there since Hurricane Dorian in 2019.

In January, Mr Bannister also said that the Farm shanty town could not be cleared because of a court order detailing how the government ought to proceed.

“I believe the Attorney General’s Office and the relevant authorities are seeking to get the appropriate authorisation so we can clear The Farm,” he said at the time.

Nothing but the same hot air BS that 'do nothing' worthless politicians like Bannister blow in the faces of voters before a general election.

These shanty town dwellers know they have nothing to worry about because Minnis and Bannister love them much more than they do true Bahamians. And therein lies the reason why the Minnis-led administration has not adopted and pursued a sustained policy of deporting the illegal immigrants arriving in the Bahamas each and every day.

Feeling proof positive the experimental gene reproduction therapy thing's ROI produced results. Why, it produced an exact mini version copy of the Mr. Minnis. Where all else Redshirty touched has been a dismal failure, thus far. Yes, there's no need to be making up these two weird characters.

didn't Minnis give them an "ultimatum" 3 years ago?

An online islander user-friendly portal is set to launch as the pre-general election's vehicle for the thousands of growing Independents having no political party affiliation of Abacoians and is to expand to give all the colony's constituent Out Islanders a chance to officially voice register their most redshirtys' grievances. Yes?