Insight: We Have The Vaccine – Now It’S Time To Win Hearts And Minds 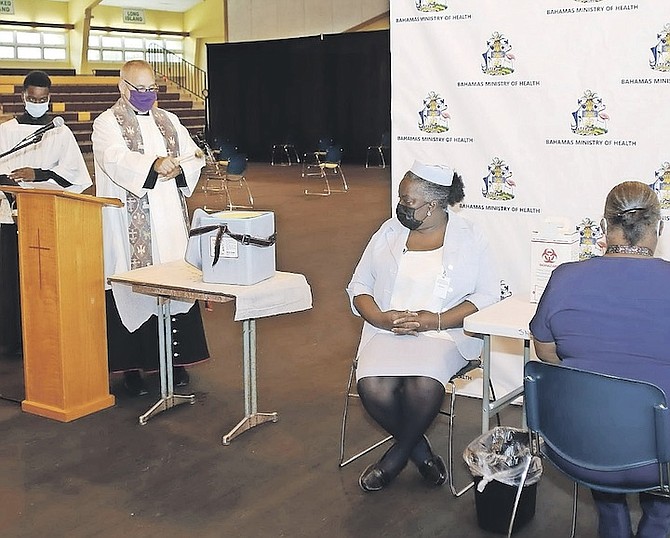 PUBLIC health nurse Ruth Bastian becomes the first person in The Bahamas to receive the COVID-19 vaccine at 10am Sunday, at Loyola Hall on Gladstone Road. Photo: Patrick Hanna/BIS

WITH the arrival of 20,000 doses of the Oxford-AstraZeneca vaccine, there should be a sense of relief after a full year of a global pandemic. However, worries persist over the need to convince the community to take the jab.

As reports of temporary suspensions of this vaccine in Europe and Asia have emerged, India, where the vaccine was made, has decided to carry out a deeper investigation into the side effects that may have caused blood clots in some recipients.

On Bahamian soil, the government is optimistic and assured the batches being investigated are different from the ones we’ve received.

Health Minister Renward Wells also sought to quell concerns, saying that incidents of blood clotting did not seem to be statistically significant. As for what that says to Bahamians less open to taking the jab, that’s not hard to tell when scrolling through your social media feeds.

The sole interest right now for any government would be for its citizens to get vaccinated. Especially for a tourism destination such as ours, our primary revenue stream requires visitors to land on our shores, fill our hotels and patronise Bahamian businesses. Without that, we’ve seen record unemployment and the government has had to borrow millions of dollars to keep businesses afloat, fund social assistance and feed citizens forced into poverty.

It makes perfect sense as to why vaccinations are a priority for any government.

As many Bahamians see it, the Prime Minister has been the torchbearer for the government’s public relations campaign, using his national addresses as a platform to highlight the importance of Bahamians taking the vaccine as soon as it became available.

The COVID-19 Vaccine Consultative Committee has also been key in public awareness efforts, but when we hear some of the questions that still exist in the public sphere – particularly in the medical community – we know there is more that needs to be done.

As for the Prime Minister, he has made clear there will be no mandate to take the vaccine, while outlining how critical it is for us to return to normalcy.

During his February 21 address, he said: “By getting vaccinated you will also help our economy to recover faster. When a large percentage of Bahamians are vaccinated, we will be able to responsibly open up even more.

“More economic activity will be possible, leading to more jobs, more working hours, more family income, more small business activity and a return of more tourists in the months ahead.

“It is also quite possible that being vaccinated will be a requirement by other countries for you to travel overseas. Other countries may not allow you to enter their borders unless you have proof of vaccination.

“We are hearing that cruise lines may require their passengers to show that they have been vaccinated. Proof of vaccination may be one of the critical measures in helping the tourism industry to bounce back around the world.

“As a leading tourism destination, we must play our part and set an example for the world.”

Indisputably, the public needs to be aware of all of these implications. This is a time to win hearts and minds – and perhaps it is time for the government to do its own study and report of its findings. Unfortunately, directing us to the WHO and PAHO has not been comforting to the public.

People would much rather hear from our local health professionals and the government on vaccine safety – particularly one that has blown the timeline for vaccine production out of the stratosphere. The public needs to buy into the process – or there will be major economic and political implications ahead.

On top of what it is already doing now, it would be useful for the government to engage more advocates from the medical community to trumpet its messaging. But up to last week, a large section of the medical community still said they were in the dark about the government’s plans. Consultant Physicians Staff Association president Dr Sabriquet Pinder-Butler voiced the association’s “mixed feelings” about the rollout last week, saying a lack of knowledge has left a lot of members and healthcare workers with a lot of concerns about the vaccine. This comes of course as healthcare workers are due to be among the first recipients as jabs begin.

The church community, whom we all know has a vast amount of influence within the country, has also been undecided about the jab due to moral issues surrounding the use of aborted fetal cells in vaccine production.

Then there is the host of misinformation circulating on social media.

When we take these conflicting narratives into account, the government has to be the most trustworthy voice in the room.

To avoid a public relations nightmare, the government needs to tactically approach this rollout, ensuring the appropriate stakeholders, particularly those in the medical community that can help educate the masses and reduce fear of the vaccine, feel included.

In addition to that, we should also pay special attention to India’s investigation of the instances of blood clotting after the administering of the AstraZeneca vaccine. Certainly, vaccinating our people should be a priority, but not more of a priority than ensuring it is done safely – something we believe the government wants to do.

We are fully aware of the need to return to normalcy and more of us can get on board if we feel it is transparent and safe.

I still tend to believe that this virus will disappear with or without the vaccines, as quickly as It appeared, and will be mostly gone by summer. Unfortunately, as PM and the leader of the Bahamian people and as a medical practitioner, Minnis does not have the luxury of wishful thinking or betting wrong. He must ensure that all available options are explored, to not only keep The Bahamian population safe, but he must also make every effort to help make Covid-19 disappear. And so it should not be hard for him to get the first 20,000 people to come forward and take their jab. And, as time goes on, more people will either come forward to take the vaccine or more people will steer away from it.

If you have the option to take the vaccine or not, why is there so much pressure or even a campaign to convince those who dont want to take it to take it. I guess we wont ever get back to normalcy. Such bs

observe that there is still no real investigation where that thing came from... they know more if nobody is interested, it is as simple as that

Lol Astrazeneca.... that one that was suspended in most EU countries due to security concerns....

Sense of relief? LOL. People cant even leave their island.

Never taking the BioWeapon you demons, so give it up.

Our government and health officials had better get all the priests and other members of the clergy they possibly can to bless this batch of donated AstraZeneca vaccine because one thing is for sure: The Communist Chinese Party officials and agents behind the promotion and distribution of it to small black nations like ours have no belief whatsoever in Christianity. The ruthlessly sinister and evil Communist Chinese have in fact made it a point to try and stamp out Christianity wherever it may exist in the world.

That's right tribanon. ChiComs have no issue killing Christians or throwing them in Prison Camps called "Laogai". The state is their god, it is above family, friends and faith. We can only hope that beast system collapses before they become the most powerful nation in the world.

Minnis and our health officials would have us believe that the health experts in most European countries, the latest being Italy, have needlessly suspended the use of the AstraZeneca vaccine for public safety reasons given their concerns about possible harmful side-effects, including potentially deadly blood clots.

It seems the sinister Communist Chinese Party (CCP) is clearly exerting undue influence over our health officials through the W.H.O. and P.A.H.O., both of which are now firmly under the control of the CCP. And we all know Minnis will do anything to try save his political hide, even if it means carrying plenty of water for these very same CCP controlled global health organizations that are known to be responsible, through dereliction of duty, for the initial early spread of the COVID-19 virus from Communist China to the rest of the world.

We really must start asking ourselves how is it Minnis can be so much under the influence of the CCP. What carrot is the evil Xi Jinping-led CCP dangling in front of Minnis's eyes?

The answers to your questions are simple enough. Minnis has reduced us to a nation of beggars. We must now take whatever is donated to us whether it be good or bad for us.

now it is time to win hearts...... we win hearts by calling the doses , JABS? yeah, I see your point.