Network Is The First Of Its Kind 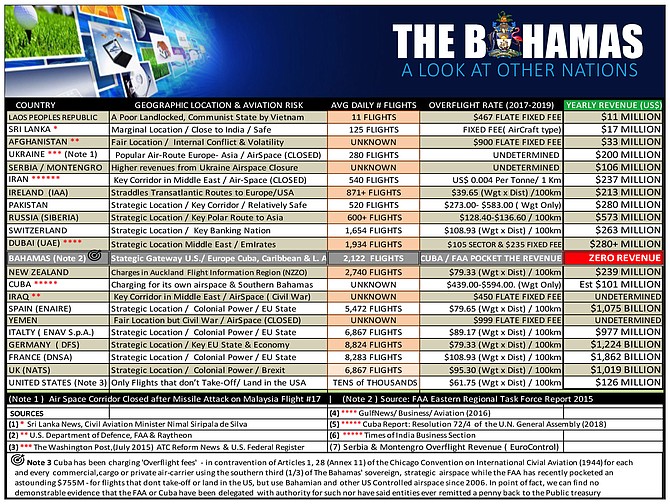 A Bahamian designed Aviation, Climate & Severe Weather Network exceeding that of other industrialized nations will enhance the safety of the Bahamas and boost key industries vital to the Bahamian economy's post-COVID rebound, according to a top US aerospace, defence, intelligence, cyber security and weather contractor.

Describing the $427M project as "quite a vision" Mr. Welch stated that BACSWN will transform the Bahamas’ ability to "sense, tracking, predict and enable the creation 3D Impact based simulations of monster storms such as Hurricane Dorian". Not to mention, improve upon the accuracy and timeliness of 'eAlerts' or need for evacuation orders.

“ On behalf of our entire team, I'd like to take this opportunity to sincerely thank the Prime Minister, DPM, Council of Ministers and Raytheon Technologies for their unequivocal support of such an ambitious undertaking” shared Mrs. Eileen Dupuch-Carron, CMG, Executive Chairman of Bahamas Aviation, Climate and Severe Weather Network (BACSWN)

“It would be remiss if I did not also convey our gratitude to the Cabinet Select Committee tasked with responsibility for negotiating BACSWN’s Heads of Agreement for their overwhelming endorsement of the project's goals, unparalleled capabilities and myriad of ancillary benefits,” continued Mrs. Dupuch-Carron

One of those benefits, added Mr Welch, would enable the Government of the Bahamas to avail itself of its sole, sovereign and exclusive rights to collect what has been projected to be upwards of $300M in "Overflight Fees" from the 594,000 flights, vessels and craft of each and every commercial, cargo and private carriers using its territory each year under the Chicago Convention on Intl Civil Aviation.

"It's been an honour and privilege for the team to collaborate with Director Basden and Assistant Director Simmons; let alone, work alongside such a world renown entity to explore how Raytheon's global resources and Advanced Weather Information Processing System (AWIPS) may be able to integrate into the methodologies of BACSWN's 'WxSenseNet" stated Mr. Robert Dupuch-Carron,

“As such, the first step was to ask Raytheon to stand up a "Meteorological Watch Office" over the Bahamas archipelagic baselines, territorial seas, contiguous and exclusive economic zone until our Convergence Centre is built " said Mr. Carron

Describing a "Watch Office" as a facility providing crafts of vessels using Bahamian air space with real-time data and other charts products/services to avoid potentially dangerous weather systems that may be developing along their flight plan, Mr Welch told The Tribune that "real-time aviation tracking and meteorological weather are the key drivers to not only collect overflight fees; but mitigate the ever-increasing threats from tropical storms and hurricanes.

As one of the biggest distributors to air transportation, Raytheon has worked extensively with the US Federal Aviation Administration (FAA), National Oceanic and Atmospheric Administration (NOAA) and the US Air Force on weather issues

“BACSWN’s system will definitely be the first-of-its-kind system in the world," Mr Welch said. "It's definitely part of a very, very advanced aviation system. It can work in conjunction with what you would describe as terminal air traffic control ( i.e taxi, take off, climb, descent, approach and landing portions of flight)

Mr. Welch added that Raytheon has been collaborating with the principals of BACSWN alongside meeting with members of the Dept of Meteorology for a year-and-a-half to help bring this concept to fruition

"BACSWN really had quite a vision for this, and it's nice to see it starting to come to fruition," said Mr. Welch. It will provide, especially for The Bahamas' Out Islands, advance warning that they don't have right now to better predict the timing of these catastrophic hurricanes and get people out of the way.

"There would be little doubt that the aviation industry will look forward to the possibility of flight plans being able to be adjusted; and, if needed, moved. In addition, I have to imagine that the tourism industry and other sectors will benefit from hyper localised weather forecasts ," added Mr Welch.

"Your strategic location is a blessing and a curse really. Being able to detect these things far in advance goes a long way for the safety of Bahamians.” he added.

“So long as we face no more unconscionable delays from the Office of the Attorney General with respect to a review of our BACSWN's Heads of Agreement for the buildout, construction, start-up, testing, operation, service maintenance and protection of said 'WxSenseNet'; or, a repeat of the tortious inference we've endured to date, we should be in a position to execute a strategic alliance with Raytheon in the very near future, ” explained Mrs. Dupuch-Carron

The Tribune has learned that in keeping with its Cabinet Conclusion and in accordance with instructions from the Minister of Tourism and Aviation (MOTA) BACSWN has filed notice with ICAO, FAA and IATA of its intention to stand up a Meteorological Watch Office within next 30-45 days in order to assist the Ministry of Tourism & Aviation commence charging "Overflight Fees".

Portia Nicholson of Higgs & Johnson serves as the group's legal advisor. The project will likely create 450 jobs during the construction phase with an estimated 300 full-time positions once BACSWN reaches its full operating capacity, with total investment approaching $427m.

The Bahamas, like so many other small nations, would never get any significant revenue for itself from this airspace control system because most of the use-of-airspace fees paid by the commercial airlines would end up going into the pockets of the certified foreign experts who must be hired by certain of our corrupt political leaders to administer the system.

We don't provide any air control. We don't collect the money because the US are the ones actually running the air control. It's their equipment, their personnel, their billing, their rules. If we want to collect it, then we need to actually build the infrastructure and the expertise to actually do it. They are not stealing our money. We are to lazy and disorganized to even have a system in place to collect it.

The Bahamas is a deal country. Dr.Elwood Donaldson said that on a local talk show. I now understand what he meant.