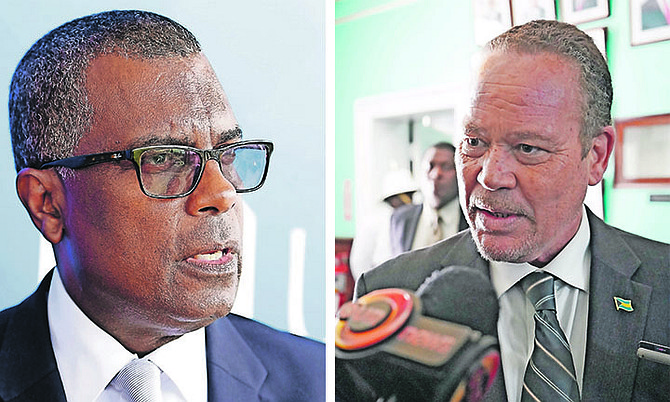 The war of words at one point climaxed with Mr Bethel urging Senate President Mildred Hall Watson to protect him from “pusillanimous behaviour”, sparking anger and an outburst from Senator Mitchell who shot back that “the last thing I am is a bloody coward”.

The legislation makes provisions for the Grand Bahama International Airport to be purchased from Hutchison Whampoa by the government. The facility is being purchased at a cost of one dollar, and the government is also assuming employee related costs that are not expected to exceed $1m.

As he castigated the opposition’s conduct as being less than interested in the future of Grand Bahamians, Mr Bethel noted that its members abstained from voting on the Bill when it passed in the House of Assembly on Wednesday.

Mr Mitchell said this was a false assertion.

While the men continued to argue, Mr Bethel referred to Mr Mitchell’s age, adding: “I don’t want you to pop any gaskets around here with your contention.”

“Because I could match you, you know. I could match you right now. Every nasty word you throw I’ll cut you down if you want to go down that road. So, get that nasty, personal stuff out of here. It doesn’t belong in here.”

Mr Bethel returned a threat that he too would cut Mr Mitchell down, before reiterating that he was of the view the PLP had nothing good in mind for Grand Bahamians.

Responding, Mr Mitchell shouted that the government had failed to ensure hospital infrastructure for women needing surgeries. However, Mrs Hall Watson instructed him to sit as he was not recognised to speak.

After several minutes more of arguing, with Mr Mitchell heckling, Mr Bethel said: “Madam President, I am asking for your protection from the pusillanimous behaviour. Google it, pusillanimous.”

“You calling me a coward?” Mr Mitchell retorted. “The last thing I am is a bloody coward now, don’t go there. I keep telling you to stop it. Now, look, you are impugning my personal integrity, you attack me personally about age, get out of here.”

As he wrapped up his contribution to the Bill, Mr Bethel argued that if left to the PLP, everything would be decimated in Grand Bahama.

He urged Grand Bahamians to “love who love you”, as they decide who will be their representatives for another term in office.

This is just ludicrous.

Although I will say the minnis led FNM has without a doubt been the worst administration for GB. We cannot go thru 5 more years of them. From just a survival POV they have to go....

The FNM really need to wake up, minnis should have never been leader, the man is an absent leader and when he is there an empty suit. He literally offers nothing...

Well, Comrade Freddy, I think it much too uphill difficult to insult a dick from another Uncle, yes?

What a waste of time. I just hope whomever is elected actually acts like a government instead of a Port Authority lap dancer. Pathetic haw fast they fall and fawn over the slumlords.

Mr: Bethel will do well, not to discuss age. . because He appears to be rolled over by a Mack truck. so just leave that alone and discuss all the propaganda you can

They say propaganda is only as good as people are stupid. The people of Grand Bahama is living the reality.

These two buffoons typify why the Bahamas and the vast majority of Bahamians are hurting so badly today with little if any hope for a better future. But Minnis makes even both of them look good in comparison to himself.

NO. . .the buffoons are WE WHO TALK NONSENSE TO GOOD COMMON SENSE. . .IGNORANT ELECTORS ARE PROVIDED WITH AN "INTERLECTUAL RABBIT HOLE" TO ACCOMADATE THEIR POOR THINKING SKILLS. . .PROPAGANDA IS THE OPIOD OF THE MASSES. . .HITLER'S NAZI KNEW THAT REAL WELL!!

Give the people real good and honest information and then allow them to make rational decisions based on good information!! Hiding the real facts by stupid and confused reasoning only allows the masses to resort to intellectual rabbits holes and then pick "dumbos" to lead our nation!! Then the people suffer for the next five years while the propagandists benefit from riding the political "gravy train" of their buddies for the next five years while the people suffer!! THIS IS THE POLITICAL BUFFOONARY THAT IS EATING THE SOUL OF OUR NATION!!

THIS ROW MAKES NO NEVER-MIND TO ME. . .I DON'T SEE HOW THIS BECAME A NATIONAL TOPIC. . .who cares about two old people rowing about who is the oldest. . .or had breakfast this morning for that matter!! Give me a break!!