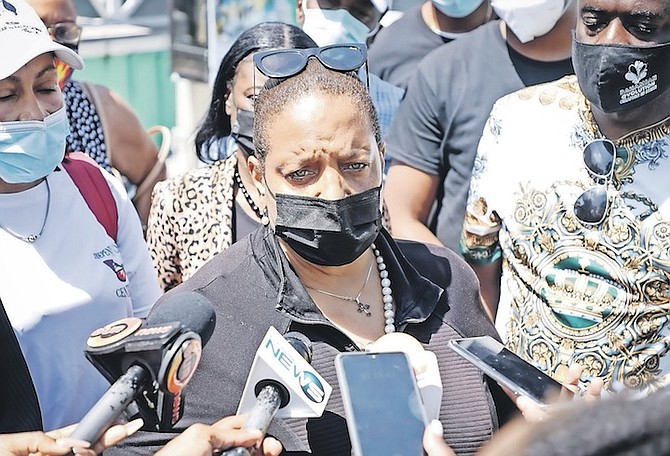 FORMER parliamentarian Loretta Butler-Turner has made an appeal for greater gender balance in the political representation of Bahamians in the lead up to the next general election.

In an interview with The Tribune yesterday, the former official opposition leader contended the nation “is weak” in this aspect, noting it has been more than 20 years since there was considerable female leadership in government. Currently there is only one woman Cabinet minister.

Mrs Butler-Turner, who has stressed she is not re-entering politics and wishes to shy away from criticising any political party, re-emerged vocally in public when she supported Democratic National Alliance Leader Arinthia Komolafe after her arrest and release last week.

She and several members of the DNA were held at Central Police Station for several hours for questioning over allegations of unlawful assembly at Parliament Square. Police have also said they “pushed on officers” in an attempt to gain entry to the House of Assembly.

Police have not yet said whether formal charges will be brought.

The incident reignited national discussions about perceived gender bias in the country.

“We need greater balance in the representation of our people,” Mrs Butler-Turner said. “If you were to look at our population, women actually out number men and so I clearly do not think that the best representation is being put forth by such a small minority of females.

“It would be excellent if there were competent females that will present themselves for elections so that they can have greater representation not just for women’s issues obviously but for issues as they affect everyone. Additionally, women tend to understand things as it relates to families a lot better.

“So, I think that we’re very weak in that department. I think it was back in 1997 when we would have had the highest amount of women representing in Parliament. At that time I think there was a 25 percent make up of women in Parliament.”

The former Long Island MP was adamant yesterday that politics is not easy on women.

“It’s not easy, but originally politics in The Bahamas was totally male dominated and they used to meet in the evenings. I think it has a lot to do in the first instance with promoting women within the political parties and secondly in terms of being able to have greater support networks for women so that they can be freer to devote a lot of time to representation.

“When you become a Member of Parliament and/or a minister, it’s highly demanding of your time and resources and everything. So it needs to be made whereby there are support mechanisms for families so that more women can actually feel free to participate.

“Our biggest hurdle in my estimation is that many of our people still look at us as being a patriarchal society and that men are the only ones that can actually hold such a position and so there are some inherent difficulties.”

While the world grapples with the fall out from COVID-19, Mrs Butler-Turner said it may prove to be a turning point for politics in the country.

She was asked if she was of the view that a woman at the helm of government would have proven more beneficial for the country.

“First of all I think the best person is the one most qualified whether they are male or female but I will say that I think the COVID-19 pandemic, one thing it has done is it has magnified the importance of women at the helm.

“If you look in the region and around the world I think there have been numerous case studies done showing how those countries have actually performed very well and if you were to take it a bit further and you look at the corporate community where women are actually CEOs of companies they have also shown that they have been faring extremely well even in these times and so I think that COVID has really enhanced and magnified the view that many of our people hold about women in leadership.

“At the end of the day this may really be a turning point for The Bahamas in terms of more women wanting to go forward into that field of representation.”

Ultimately, Mrs Butler-Turner said women and men in leadership should be weighed “pound for pound”, when asked if she’s been pleased with the calibre of women candidates ratified across the board.

“I like to weigh the candidates against the candidates because we as women can be pretty harsh on each other and so as I reminded someone recently, we’re quick to talk about the calibre of the female candidates that are being put forward.

“If you were to look at many of the male candidates that have been put forward or are representing us, I have not seen where there has been any margin of better representation by our male counterparts.

“So to answer the question, if you weigh it pound for pound in equal measure the calibre of the candidates at this point are probably about the same and in some instances you’re seeing new faces and I think that’s a good thing, but let us not measure women with a harsher measuring stick than we do our male candidates.”

Madam Butler-Turner, my gawd you are in the Bahamas, there never be in your or my lifetime a female PM

to best have parliamentarians reflect the people they represent about 20 should be women, four or five should be white Bahamians, and there should be lots of young people. And let us also lower the voting age to 16 years old, there are plenty of sensible better informed 17 year olds.

The "pound-for-pound" men vs women comparison references made by LBT are difficult to take seriously given her own 'weight' as a woman in Bahamian politics.

Very true, sheeprunner. LBT's political demise has nothing to do with misogyny, but rather her own incompetence as a so-called "politician".

Well, wagering my starring bet on the future youngest as the most serious challenger prime minister by the year 2027, will be the deeply unfamiliar but ever the most interesting Comrade Sister Gabrielle Turnquest, which will align the most likable and gifted Sister, but a few years younger than the realm's premiership of Lynden Oscar Pindling.

Too bad LBT did not bide her time a bit longer. The big daddies in the FNM did not wish to give her the opportunity to lead. I think big momma would have done a far superior job all around than the the current "leader" of the Country......

You're absolutely right, LBT would have done a better job than Minnis. But then again, so would have just about anyone else, including even the very detestable Vomit Christie. No one, and I mean absolutely no one, not even myself, could have ever imagined the extent of the harm Minnis has caused our country and the vast majority of its people.

Like how and when we begin reaching over to the other side COVID, the realm's political leadership will need, rethoughtin'.
Well, my comrades, it goin' be difficult but there must be a keepin' of the governing achievements along with the lettin' go of the political acceptability of the many ugly habits we have tolerated for some 66 years.

Obviously neither of you have had any first hand experience with the lady. As a former constituent of hers I experienced five years of listening to her mouth run but nothing of any consequence achieved in our constituency. I am not alone in my view of her which is why she was hurriedly packed off to Long Island in the following election. Ask the Long Islanders what their take is on her. My response to her renewed yapping would be we might need a lot of women but we don’t need you!!!

I was all for LBT as PM, her actions in LI after that hurricane were impressive. Then she got leader. And she appointed the eternally dumb Rodney Moncur to the senate. Incredibly dumb decision that made her look like a fool. All for women in politics but LBT aint the answer....

Yes, women , just not you. But you can fight for the cause, so you will be remembered as a.fighter....whatever.

If she were used as an example of what woman in politics would bring to the table, NO PARTY would be stupid enough to include woman in politics. Her thurst for power at any cost, vivid display of lack of honesty, and total inability to act as team member, disqualifies her 100%!

We do not specifically need more women in politics. What we need is honest people willing and capable of conducting the countries business in the best interest of the people.

Gender and color are totally irrelevant!

I concur with the third and last paragraphs.

Could not have said it better myself. . .GENITALS DO NOT GOOD PEOPLE MAKE!! Stupidity don't care what ya have in ya clothes them!! Further more, females must first put themselves forth. . .THEN THE PEOPLE THEMSELVES MUST ELECT THEM!! So. . . yinna sistas them get yinna behind on the line like everybody else!! AND GOOD LUCK. . .IF YA BE ELECTED!!

LBT is the best example of a person with a female genitalia in they pants getting power and acting the fool!!! Go figure!! I must agree that we had some dynamic sistas in power in the past. . .we had some female dummies as well!!