Police On High Alert To Break Up Crowds 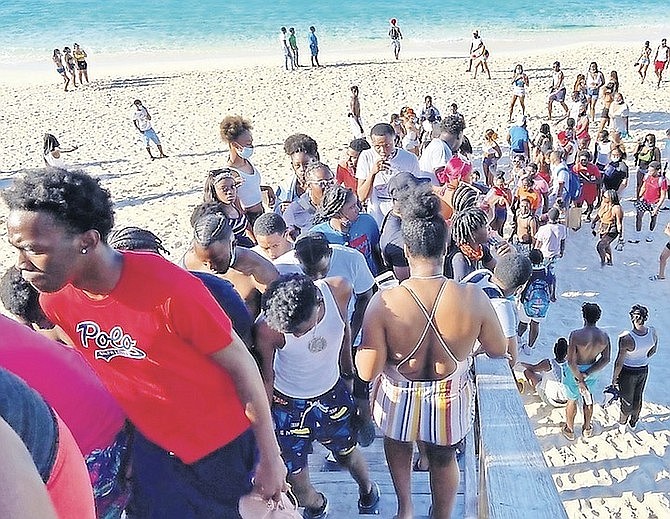 Scores of people packed at Cabbage Beach on Paradise Island on Sunday.

OFFICIALS from the COVID-19 Enforcement Unit are urging Bahamians to avoid large gatherings at beaches and other public places over the Easter holiday, saying officers will be on high alert for those found in breach of emergency orders.

Yesterday The Tribune published photographs showing scores of people packed at Cabbage Beach on Paradise Island on Sunday, with many beachgoers not wearing a mask or following social distancing rules.

This comes as the country is seeing a sustained uptick of positive COVID cases on several islands, including New Providence and Grand Bahama.

Director of the National HIV/AIDS and Infectious Disease Programme at the Ministry of Health, Dr Nikkiah Forbes recently told The Tribune it was “fully possible” that cases could skyrocket following the Easter holiday weekend with increased social interaction.

When contacted by The Tribune yesterday to see if officials will be beefing up security for the holiday period, officer-in-charge of the COVID Enforcement Unit, Chief Superintendent Zhivago Dames said police and COVID ambassadors will be on high alert for any large social gatherings.

He said: “We will be doing what we have done over the past weeks and months and that’s patrolling the beach and of course the public places and cultural places to ensure that persons are adhering to the emergency protocols and so yes, definitely we will have persons patrolling our beaches.

“You can expect the COVID ambassadors along with our officers from the Cable Beach Division especially in the Goodman’s Bay and Saunders Beach and those doing their duties out there to ensure that persons are following all of the health protocols.”

According to the COVID-19 Emergency Powers Orders, large social gatherings are not permitted in New Providence.

Yesterday, CSP Dames said current COVID-19 rules do not permit more than five people in a group at a beach and added officers will not hesitate to enforce the law for those found in contravention of protocols.

“The emergency order is quite clear on persons who go to the beaches,” he added. “They should be in groups of five and not over that. If you are to be in groups more than five, you would definitely be in breach of the orders and we will have our officers and as I’ve said already, our COVID ambassadors, patrolling the beaches to ensure that persons are adhering to the Emergency Powers Orders.”

Tourism Minister Minister Dionisio D’Aguilar also made reference to the beach gathering yesterday, noting there will always be one or two people “who congregate and create possibilities for community spread.”

He said it’s critical for Bahamians to not let their guards down in order to prevent a third COVID wave and to avoid further economic downfall in the country.

He told reporters outside Cabinet: “It’s absolutely vitally critical that we all take whatever measures are necessary to ensure that we don’t have this third wave and while I understand to a certain degree that a number of Bahamians are clamouring for enforcement, but we also need to as a people ensure that we abide by the rules.

“There’s always going to be one or two people, as was shown in this morning’s paper, one or two people who congregate and create possibilities for community spread. We’re going to double down and make sure that we don’t bring about a third wave.”

Mr D’Aguilar added: “It would be extremely troubling to the rebounding and restarting of our tourism economy if that were to happen so all I can do is appeal to Bahamians to abide by the health protocols and obviously, the enforcers of the health protocols are doing the best they can but if there’s widespread disregard for the protocols no matter how many police you put on the ground it’s going to be too difficult to keep it under control so, there has to be a will and a want and some enforcement, but the will and the want is what we have to do to ensure that we don’t bring about this third wave.”

According to CSP Dames, there are over 40 police officers and some 92 ambassadors in the COVID-19 Enforcement Unit.

Will people be given their rights back after vaccinations are completed or do ppl still have to follow those rules being vaccinated. It does not take the Bahamas long to implement those same procedures around the globe. News flash, they will give those vaccinated ppl guidelines to live by as well. Nothing really changes...

Correct. I predict the world govt will temporarily allow those with vaccine certs to not wear masks for about 60 days while those seen wearing masks (because they did not get vaccine) will be brow beaten and ostricized by their fellow Christians around the world.

Once the remaining relent and get the vaccine except just a few die hards, the world govt will suddenly discover a new variant and the masks will be required again for all, along with a new vaccine 3 months later.

Woe be unto he who questions the "science" during this time or dares to request evidence. Remember what happened to those doctors who questioned whether HIV causes AIDS in the face of many non-infected AIDS patients?

The COVID-19 Enforcement Unit is nothing but harassers of the ( poor ) Bahamian people, who are just trying to make it through during this rough time,

As long as you are wearing something red or yellow, or have someone in your group who works for the Covid Police you can continue doing what you want.