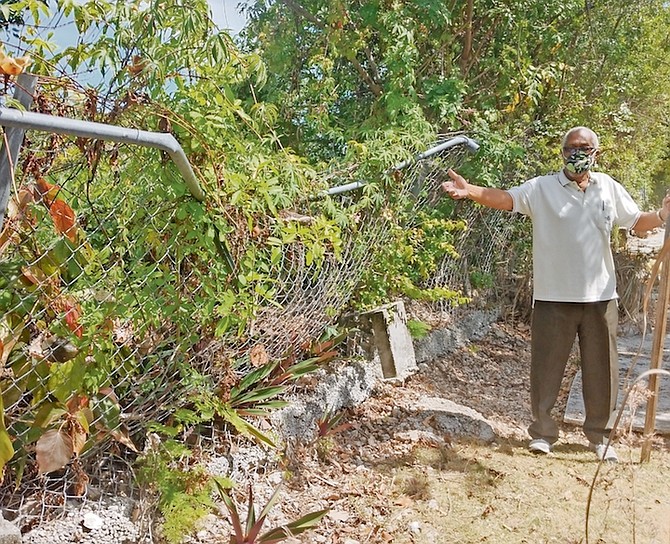 DR Alfred Brathwaite shows the damage to his property.

A FREEPORT resident is frustrated after two entities that had attempted to gain access to a remote utility pole refuse to accept responsibility for damage to his property.

Retired pathologist Dr Alfred Brathwaite claims that work crews from the Grand Bahama Power Company and the Bahamas Telecommunications Company were supervising a tree clearing in the area to gain access to the pole when a huge tree fell on the fence at his residence on Hawaii Avenue.

Although he has lodged an official report about the incident with both entities, they deny any responsibility for the damage, and the matter remains unresolved.

Dr Brathwaite said the utility pole has supplied the power, telephone and cable services at his residence since 1988 when he first purchased the property.

“I have been employed by the government assigned to the Rand Memorial Hospital, and I retired in 2005. I came to Freeport in 1985 and I moved to this property in 1988,” he said.

“It soon became obvious that whenever there was some difficulty arising with the electrical pole that supplies my house, it took a long time for the repairs to be fixed,” Dr Brathwaite said, estimating that between 1988 and now there have been close to 100 visits not only by GB Power, but also cable and telephone companies.

The utility pole is located on an easement between Hawaii and Grenade Avenues which tends to be overgrown. The area was maintained by workmen who would be sent in on foot to clear the area.

Dr Brathwaite explained that whenever there was an issue with the pole itself, the workers could never get to the pole unless they went through a private property located off Grenada Avenue.

He said that they are usually one of the last residents to have power, telephone, and cable services restored whenever there was a disruption or a hurricane because the area was deemed a problem area by GB Power officials.

“Between 1988 and now, having spoken to GB Power by telephone and actual appearance, and to the Grand Bahama Port Authority, nothing significant seems to have been done,” he said.

“I have been to them and the latest I am getting from a gentleman at the Port Authority is that I must solve the problem. That the problem was mine and I should canvass my neighbours. This was about this year, but it could be December last year when a gentleman told me that in the presence of Ms St George, who said yes there is a problem and she said please get it fixed.”

The homeowner is an avid gardener, with fruit trees and vegetables of all varieties. The fence at the rear of his property was damaged and dislodge from the foundation after trees were being cut and cleared down last August by a contracted firm.

Dr Brathwaite said the pole in question is located in a messy situation because of the intrusion of the fencing of the easement.

He said that someone at BTC had paid him a visit about their plans to change to broadband using an underground cable to eliminate the issues with the lines above.

Last August, Dr Brathwaite saw persons with a tractor clearing the trees in the neighbour’s yard on Grenada Avenue, which is at the back of his residence.

“I thought this is marvellous because there were individuals associated with the tractor and persons with jackets of GB Power and BTC,” he recalled. When they were finished and left and I went outside and I realise that they never got to the pole and there was a huge tree lying on my fence, which was dislodged from its foundation.”

About two days after that incident, Dr Brathwaite said he got a call from BTC advising him that they are having problems getting to the pole and he may not be able to get broadband.

“I assumed that BTC was responsible for the clearing and this tree falling on my fence. So, I have been on the phone and to the office, and eventually, they told me they don’t have anything to do with poles and that GB Power was responsible. I went to GB Power office and they gave me a form to fill out, and I indicated that the problem is not to do with power supply but something else.”

Dr Brathwaite said nothing happened. “I went back a month later and the receptionist copied my documents and within a day I heard from GB Power indicating to me that they do not accept responsibility and hinting that it might have been an act of nature that felled the tree,” he said.

Troy McIntosh, deputy director and city manager of building and development, Grand Bahama Port Authority, told The Tribune: “We are sympathetic to the plight of Dr Alfred Brathwaite. However, the Grand Bahama Port Authority has yet to receive any formal complaint or details regarding this incident. We would need to ascertain the details on how the damage occurred. Until we have the facts, we cannot speculate on it. We wish to advise Dr Brathwaite to file a formal complaint, in order for us to conduct a full investigation to assist in bringing about resolve to this matter as best we can.

“While the GBPA is not aware of this recent incident, we addressed a previous incident for Dr Brathwaite after the passing of Hurricane Matthew in 2016. Dr Brathwaite contacted City Management concerning the need for BTC to repair his telephone line, located at the rear of his private property on a utility pole. He mentioned that BTC could not access his property due to overgrown vegetation located at the rear. As a standard operating procedure, he was advised and assured that City Management would investigate his complaint and revert.

I feel for Dr Brathwaite, Freeport has become a city run on the "everyone in charge, no one responsible" Principal. Successive Government that obviously don't know how to act Governmentally, private city ownership without any accountability. Becoming the perfect classic slum.