More Homes Demolished In The Farm 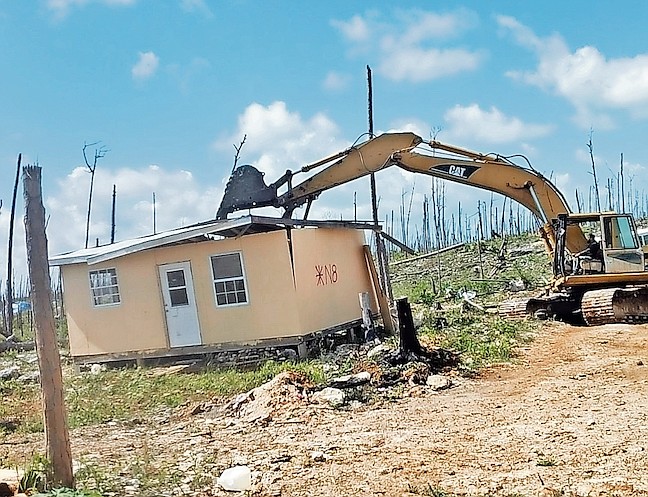 Demolition in Abaco at the weekend.

A MAN displaced by demolition activities in Abaco over the weekend says dealing with the aftermath has been a nightmare as he struggles to find shelter for himself, his girlfriend and her two-year-old daughter who no longer have a place of their own to live.

The man — who did not want his name disclosed in this article — said he pleaded with workers on Saturday to give him until August to find a new home, but they still destroyed his house.

Residents say about ten other structures were destroyed. It comes after Works Minister Desmond Bannister said earlier this month that the government would move to the third phase of its plan to demolish structures in the Farm shanty town, which includes destroying structures occupied by people.

The now displaced resident said yesterday: “They make you take the stuff out of the house and they crushed it with an excavator. I talked to the gentlemen and said give me until August or July because I have somebody fixing an apartment that I could rent because ain’ no house like that in Abaco. He told me only the minister could say don’t knock it down. I say I can’t reach him. He say the minister out the country.”

Human Rights Bahamas released a statement yesterday condemning the government for “continuing to manufacture and perpetuate a humanitarian crisis in Abaco...”

The group said around 40 people, including 16 children, were left homeless after the demolition activities and that “no provision whatsoever” was made for their shelter or safety.

The man who spoke to The Tribune said he is a Bahamian. He said he moved to The Farm two years ago after Hurricane Dorian destroyed his home in Marsh Harbour.

“I was just trying to get on my feet, do a little saving, try invest in a property,” he said.

When workers insisted on destroying his property on Saturday, he said he placed his belongings in the homes of neighbours.

“What’s so funny,” he added, “is you don’t know if this week it gon’ be the other people houses that you put your stuff in getting knocked down. No human rights or nothing. It’s like a dog living better than you.”

He said his efforts to find a new place to live are complicated by the fact that he is low on cash, having done only a “little construction” work since the storm.

“It’s just hurting,” he said. “It’s like a nightmare. It was hard to sleep last night. It’s sad and it just shocks you. You don’t know somebody would be that hard heart, no mercy. I say where y’all gon’ put people with these little kids who going to school? Right now it’s only the Red Cross and other organisations really helping people around here. Government ain’ doing nothing. They don’t care about nobody.

“I know one thing, they ain’ gon get no vote from me or my friends who around me anymore. They want come walking around election time, the devil is a liar. All I wanted was extra time. I wasn’t asking for money, just a little help.”

Last week, the United Nations’ human rights experts urged the government not to demolish homes in the Farm because it would increase homelessness and suffering. The UN noted that many people in the Farm were affected by Hurricane Dorian.

The Bahamas is currently serving a 3 year term on the United Nations Human Rights Council.

"During its term on the Council, The Bahamas has pledged to ensure that the interests of CARICOM States, SIDS and other Small States are well served, as well as to draw greater attention to the nexus between human rights and issues such as climate change and sustainable development. The Bahamas will continue to underscore the importance of technical assistance and support for capacity building in the promotion and protection of human rights."

You can find the full statement on the Ministry of Foreign Affairs website.

So you knock a mans house down on a Hurricane ravaged Island with limited access to work, food, water and shelter. You tell him to man up and provide for his family, is that not what he did and you just destroyed it? Then you cheer the destruction satisfied that you just made another family homeless and in further distress. Well done, most of the supporters of these these story's truly live up to the D- education reputation the Bahamas has. Haitian or Bahamian it dont matter, those humans are there on that island, protected by laws, just trying to make it day to day.
I'd call shame on you, but to pity you makes more sense...

The "man" trespassed, built, and occupied an illegal dwelling, without government approval & without conscience of any building codes or laws of this country after being told not to do so and putting his family at risk!

You stupid enough to call shame on the government because the "man" refused to follow the law and brought this onto himself?

Every country has to deal with Illegal immigration brought about by persecuted people leaving trying to find a better life for themselves and their family. Yes of course they should go through the appropriate legal channels to move to the Bahamas or the US, but reality is not all will, deal with it. The country they arrive in can choose to either treat them in a civilized manor or not, could you imagine if the US bulldozed illegal immigrants homes. This man claimed to be Bahamian, not even an illegal, his crime, not having enough money to go through all the appropriate paperwork and channels to get himself an official home. In case you are 'unaware' Abaco was flattened by Dorian, there are not the legal structures and facilities to support the people already on that island, where is the help, should they sit around waiting for the Gov to build them a home or a they have done, started building themselves, perhaps you would prefer that they relocate all the people to Nassau, are the resources to house them available there? I was actually calling shame on you, yes you, the government just does what it does to keep itself in power, and if that means picking on impoverished people to please a segment of their electorate that's what they do, it seems to have your approval. Right now they have just put a family out of a house and onto the street, how has that helped the situation for anyone?

Agreed SP... so they break the building codes, break the immigration code.. we Bahamian has had to pay for our land, mines caused $37,500 out east, and these people can get it for free, and expect no consequences? Heck, knock them all down!!. Even as a lil boy growing up in spring city only thing we didn't pay for was what generation property was owned by our families. They can always go back where they were before building. All Right Bahamas has to do is invite them into their houses and let them live there.