‘Demolition left me homeless and cut me off from my family’ 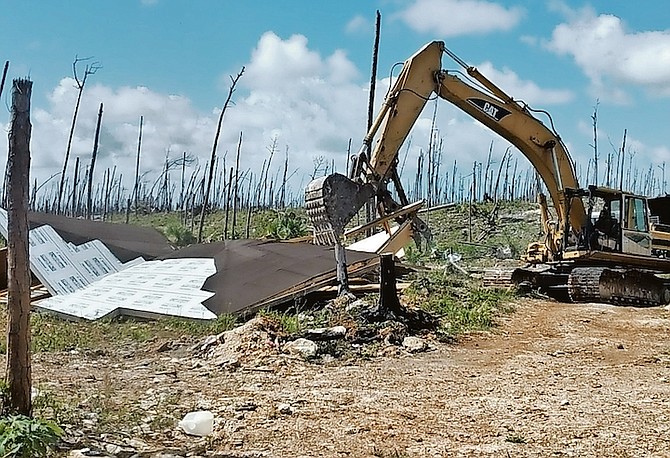 A HAITIAN man who survived Hurricane Dorian in 2019 says the demolition of his newly completed home in The Farm, Abaco, over the weekend has left him homeless and separated from his family-of-three, who are all now fearful of their future on the island.

The former shanty town resident, who spoke on the condition of anonymity, told The Tribune he’ll never forget the heartbreaking feeling he experienced while watching construction workers tear his home apart with a bulldozer Saturday morning.

However, the man claimed yesterday he was caught off guard by Saturday’s exercise, adding that the demolition has not only left him displaced and sleeping in his car, but also separated from his family.

“What the government do wrong is, they could’ve let us know what’s happening,” he told this newspaper.

“First, they come, they put a paper and then after that, they gone and then a month (later) when the guy come and put the number on in my house, then I asked him what they put the number there for and if he did tell me what the number was for then I would’ve known what to do, but when I asked him, he was like he don’t know and he just doing his job and then he gone,” he told this newspaper.

“Now, we have nowhere to stay and nowhere to go. I sleep in my car, but I let my girl and my two kids sleep by a friend because we can’t find no apartment right now.”

Similar sentiments were shared by another displaced resident who told The Tribune on Sunday that recent demolition activities have left him struggling to find shelter for him, his girlfriend and daughter.

According to residents there, about ten occupied structures were destroyed over the weekend.

They also say another ten homes are set to be demolished this week.

“They did five down on Friday and five down on Saturday. They say they taking ten down every week,” the father-of-two said yesterday.

This comes after Works Minister Desmond Bannister said earlier this month that the government would move to the third phase of its plan to demolish structures in The Farm shanty town, which includes destroying structures occupied by people.

Officials have said it’s a move that could impact some 2,000 residents living on Abaco.

Yesterday, the displaced resident said many families impacted by last week’s demolition exercises are experiencing hardship and are also uncertain as to where they will go next.

He added while many knew building in the area was illegal and wrong, they had no other options due to lack of available housing in the area, which has persisted to be an issue since Hurricane Dorian in 2019.

“We located to the Farm because we didn’t get nowhere else to go,” he said. “We couldn’t find no apartment or nothing… so we did buy all the materials (to build the house). I put in all together, almost $7,000.”

However, he watched his hard-earned money go down the drain when his house was destroyed before his eyes.

“When I see that, I was about to cry, but then I just walked away,” he said.

The man said he has been living in this country on a work permit for nine years. Like many others, his home and belongings in the Mud—another shanty town—were destroyed by Dorian nearly two years ago.

Last week, the United Nations’ human rights experts urged the government not to demolish homes in the Farm, calling it a “serious violation of the human right to adequate housing” that will likely result in increased homelessness and extreme poverty.

The UN noted that many people in The Farm were affected by Hurricane Dorian.

However, officials, including Mr Bannister, have already suggested that the government will not be swayed from its plans, arguing the Bahamas is a country of laws that must be upheld.

Mr Bannister went on to say that Bahamians must decide if they want to live in a country like the Bahamas or a country like Haiti where there is “dirt, garbage, shantytowns all over the place.”

On Sunday, Human Rights Bahamas released a statement condemning the government for “continuing to manufacture and perpetuate a humanitarian crisis in Abaco.”

The group said around 40 people, including 16 children, were left homeless after the demolition activities and that “no provision whatsoever” was made for their shelter or safety.

No matter your cry illegal is illegal, and if you feel you should be allowed to squat illegally then find somewhere else to do it, say like in another country.

In other nations: stalking is a crime, groping is a crime, cyber bullying is a crime, hacking is a crime. ALL illegal, but WE do all those things here (to ONE Haitian gal - her uninvited roommates). But ONLY Haitians will face punishment for THEIR ‘illegal’ deeds (benefit of being on the same evil page - we can make it so laws don’t apply to us). And we also got away with thirty years or so? of gambling illegally even though it was against the law. EGOTISTICAL. WICKED.

‘Have your say’ will now mean ‘ladies’ get to practice equality (free speech for ALL?) by finding ways to punish an anonymous user/person.. flex biceps

Save it for the pompous self-absorbed bureaucrats at the United Nations who don't give a rat's arse about the Bahamas and the Bahamian people.

Most of us Bahamians want our Bahamaland free of an overwhelming number of lawbreaking invaders who have fled their own lawless country. In other words, we don't want our children, our grandchildren, our great grandchildren, and all of their children for many generations of Bahamians to come, to ever have to face growing up in a Bahamaland that bears any resemblance to the unsafe, unhealthy and most miserable way of life in Haiti.

For decades now the United Nations should have been doing much more on the ground in Haiti to help the Haitian people. But instead it's misguided bureaucrats wrongfully choose to attack the Bahamian people for wanting to protect the Bahamas from turning into the next Haiti in the Caribbean region. Go figure!

How is he in the Bahamas on a work permit for 9 years? Who is employing him and paying for it and why is his employee not able to house him? What has he been doing with is money as he obviously has made enough to purchase a car and to build a $7,000 structure on land illegally?

These people cold they are going to live off the fat of this land while their money is sent to Haiti to fund another boatload of illegals.

The Government needs to continue to send a clear message that we won’t entertain it. If you’re going to live here you must learn to follow the rule of law.

Ironically, if the Farm Road had not been harbouring and enabling the vast theft occurring on the island they might have been able to stay under the radar and no one would have been bothered. (building material, generators or tools missing? check farm road!) They have no one to blame but themselves for poor decisions in this instance.

Please get this law breaker and his family on the 1st thing smoking back to Haiti!

Before building these illegal timbered structures on top of loose rubble foundations they should have the common sense they are building very dangerous structures like this....if only they look that the previous hurricane and strong winds was capable of ripping off destroying the leaves and branches of all the trees that they can see. And some trees likely rotted or weakened state likely to be sent flying all over next strong winds.

It's also not their land to build on.

Agreed tribanon. In these structures repeatedly popping up in certain selected spots seems to be the quid pro quo between land owner and squatter and of someone ie employer receiving a benefit in return etc. Investigation needs to go beyond the illegal contractor and start looking for aiders, abbetors, accomplices in this disrespect of Bahamian laws.costing Bahamian taxpayers money !!!! No foreigners or group of persons be intentionally, repeatedly breaking laws, making a mockery of Bahamian or any other country's laws.