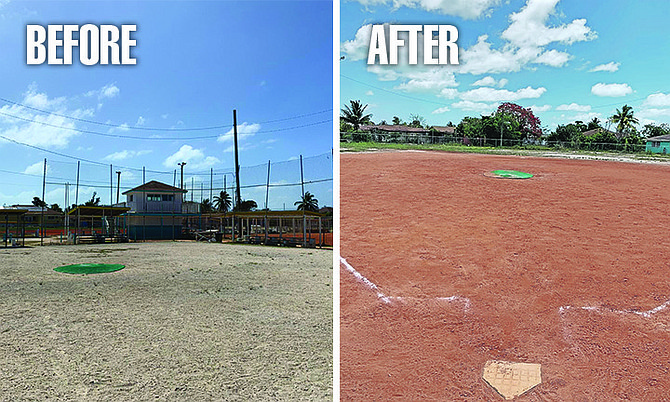 Thanks to the ‘Colonel’ and some friends lending a helping hand, the boys in the 10 U and 12 U division at Freedom Farm have a new field - “The Colonel’s Choice” to chase their major league dreams on.

I have been involved with or watching sports my entire life and after becoming a father you can add coaching youth baseball to my resume.

An exciting Freedom Farm 2020 season in the 10 U and 12 U divisions, was totally erased by the global COVID-19 pandemic.

What a roller coaster ride it was in 2020, the pandemic, social distancing, lockdowns, curfews, home schooling and the list goes on, had us all out of sorts in one way or another.

The sporting communities took their blows with numerous sporting disciplines seasons and meets cancelled on the sports calendar.

As seasons were cancelled so were projects to improve the facilities and infrastructure of the various sporting leagues.

Sadly the year off forced by the global pandemic has allowed sports fields to become worn, unkempt and in some cases totally unplayable throughout the country.

The 10 U and 12 U field at Freedom Farm became a glaring example.

The field had definitely seen better days and with the pandemic and social distancing still playing a large roll in every day life, corporate sponsors have put everything on hold, so funding for the refurbishment and its completion would be a challenge.

Then I had an epiphany!

The lightbulb went on in my head ...

I would ask the ‘Colonel’ to sponsor it!

Yes KFC Nassau, of which I’m the brand ambassador. (Something I’m quiet proud of)

KFC Nassau has long been one of the premier corporate sponsors in the Bahamas.

KFC’s strong sense of standards, quality, value for money, and investing in the community has always earned my respect, in addition to their commitment to family and building better communities with their philanthropic efforts.

So I called the ‘Colonel’ and gave him the pitch. (Pun intended)

They quickly jumped in to action sponsoring the refurbishment of the infield, dugouts, sidelines, warning tracks, outfield fence caps and all of the spectators bleachers.

I was and still am overwhelmed by their generosity, but before I could collect myself my phone began to ring.

First it was Creative Relations

co ordinating and spearheading the branding and the entire refurbishment project .

Tropical Shipping was the next to chime in offering to get the infield clay and supplies here at a discounted rate in an effort to assist the league.

MYSC and MOF assisted greatly with the supplies being landed duty free.

Darville’s Customs Brokerage handled all the paperwork preserving my sanity.

Coach Marlon Bostwick and his heavy equipment was a major factor also.

And just like that, thanks to the ‘Colonel’ and some friends lending a helping hand the boys in the 10 U and 12 U division at Freedom Farm have a new field - “The Colonel’s Choice” to chase their major league dreams on.

Statistics show that youth sports is a huge deterrent to young men being involved in criminal and or gang related activity.

Considering some of the most recent tragic incidents involving our youth losing their lives due to senseless acts of violence, this is an awesome gift. Greatly appreciated by Freedom Farm, the directors, coaches and players.

Next week part two - ‘The Grass’

What about some.of those major league players with all of that money sponsoring à field, some lights, and some comfortable benches? How about a levelled area to walk around the concession stand , so you dont twist your ankle or even a decent walkway to the olympic bathroom with some fire works to brightenen up the way as you approach. Corporate sponsors must always fork out money, yet get abused with increased taxes because the world feels that they should pay "their fare share of more taxes" and still keep contributing. They didnt get into business for people to demand more and more taxes .

hmmm... you have points. We are suffering from a lack of vision in this country. And our decline hs been ablely abetted by intelligent men who supported anything the govt did because their pockets were being lined with contracts.

What this country always needed was growth and innovation. But these men scoffed at it. Said what do you mean growth? Tourism and FDI is where its at. Then came COVID, now these same intelligent men looking for contracts on determining how to grow the economy. you cant make this stuff up.

So it would be great if corporate sponsors could use their extra pennies to put into more development programs as opposed to taxes from visionless administrations and it would be great if those who made it collectively look back and reach out a hand. Some of them do. Buddy for example