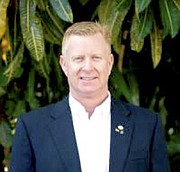 David Morley, whose firm is one of The Bahamas’ largest commercial property managers, told Tribune Business the Minnis administration was likely to create “a whole bunch of mortgage defaults” and other problems if it follows through with plans unveiled yesterday to tackle real property tax deadbeats.

Disclosing the 2021-2022 annual budget in the House of Assembly, Dr Hubert Minnis said tenants in commercial office and retail properties owning substantial real property tax arrears will have to pay their monthly rents to the Department of Inland Revenue (DIR) - rather than their delinquent landlord - until the debt is settled.

“We are introducing legislative amendments to improve real property tax collections for commercial properties,” the Prime Minister announced. “We have had situations where owners of significant commercial properties collect substantial rent from businesses but are delinquent in the payment of taxes.

“The legislative enhancements will permit the government to have those rents paid to the Department of Inland Revenue (DIR) for delinquent commercial property tax owners.” However, to enforce this scheme the government is implementing reforms to the business licence Act rather than the Real Property Tax Act.

The changes, which have been seen by Tribune Business, prohibit the renewal of a tenant’s Business Licence if they fail to agree to pay their rent to the Department of Inland Revenue rather than the delinquent landlord.

And, in return for doing so, the landlord will be prevented from evicting their business from the property even though he is receiving no rent. Thus the legal reforms appear to rip up the typical contractual arrangement between a landlord and tenant, instead inserting the Department of Inland Revenue, which could pave the way for a potential legal challenge.

Mr Morley yesterday questioned why the Government did not simply use the existing laws to combat delinquent commercial property owners as it has the power to seize the subject real estate, and sell it at auction, to recover real property taxes owing.

Tribune Business recently reported how the Finlayson family lost its bid to overturn a Supreme Court order compelling the sale of a downtown Bay Street property to settle a near-$2.2m real property tax debt, and Mr Morley said the Government’s Budget plan will be “difficult” to implement and enforce.

“Most commercial property leases are structured on a net lease basis, net of the rent and common area maintenance (CAM) charge,” he explained. “What takes place is that included in the CAM is the tenant’s portion of the real property.

“In all fairness, if the Government wanted to go after the tenant, the tenant should only be responsible for their portion of the rent.... It would only be fair to take that share of the property tax that the tenant is supposed to pay to the landlord, not the whole thing [rental payment].

Mr Morley warned that the Government’s plans to seize all the rental income from delinquent commercial properties would leave many landlords/owners unable to repay the mortgage financing secured on their buildings, and “then you would have a whole bunch of mortgages in default”.

Questioning why the Government was not requiring banks and other property lenders to pay the tax arrears on behalf of their borrowers, as provided for in the Real Property Tax Act, Mr Morley added: “Plain and simple what they need to do is enforce the law on the books.

“Right now, the Government has the opportunity under the law to sell the property to recover the real property tax owed, and they need to do that more regularly. That way you get rid of deadbeat landlords. There are a lot of deadbeat landlords that don’t pay real property tax until such time as they sell the property, when they will go in and negotiate a reduction in the surcharge in exchange for a lump sum payment.”

Mario Carey, the Better Homes and Gardens Real Estate MCR Group Bahamas principal, backed Mr Morley in declaring that the Government’s plan “makes no sense”. He added: “How can you put the burden on a business guy who has put in leasehold improvements, and now the Government is telling them they can’t get a Business Licence because the landlord has not paid real property tax?

“What’s going to ultimately happen is that the bank is going to foreclose on the property and everyone is going to lose. Why not change the law to say you’ve got two years to pay your outstanding real property tax, and if you fail the Government has a right to sell your property at auction.

“I don’t know what they were thinking. That’s a strange one. I wonder who they are protecting and who they are going after. It makes no sense.”

High-end real estate, as revealed by Tribune Business, was also targeted in yesterday’s Budget for an additional $4m in revenue in the upcoming 2021-2022 fiscal year via the Government increasing the VAT rate to 12 percent on the “portion” of real estate transactions valued above $2m.

“We are increasing the VAT on realty transactions for that portion of a real estate transaction over $2m,” Dr Minnis said. “Presently, all transactions of $100,000 are subject to 10 percent VAT. With the amendment, any portion of a transaction that is over $2m will be charged at the full VAT rate of 12 percent. We anticipate this adjustment will yield an additional $4m.

“We are also including a new provision in the VAT legislation which requires a property owner to inform the Department of Inland Revenue when they are shifting the use of their owner-occupied home into a residential or commercial rental property. This will ensure that these buildings are properly classified.”

Christine Wallace-Whitfield, the Bahamas Real Estate Association’s (BREA) president, in a statement said the sector would accept the tax hike if it was accompanied by an improvement in the ease of doing business which included faster processing of real estate transactions.

“The Bahamas Real Estate Association (BREA) is more than 700 members strong, and as a professional association we understand the Government’s need to identify additional revenue sources,” she said.

“There were concerns among some of our members when the rate increase was originally thought to be on properties selling for $1m and up, as that net would have captured a lot of Bahamian homeowners who are not high net worth individuals, but when the benchmark was lifted to $2m we discussed it and agreed that what the individual buying a $2m property really wants is better service. They don’t want their application to linger for months in a government office or their papers to be shuffled around. They want to be treated with respect.”

Among the most frequent complaints, said Mrs Wallace-Whitfield, is lack of attention to applications for investment approval and what she described as the “little sense of urgency” by most government departments.

“The individual spending $2m up to ten times that is accustomed to good service. The few extra dollars on the closing cost will hurt a little, but can be more than compensated for through speedier closings and more respect for the individual,” she added.

“These are people who are coming into The Bahamas with money to spend, helping to boost the economy, and they become very discouraged, sometimes to the point of disbelief, that it can take four to six months to close when back home in the US or Canada it would have been a matter of days.

“And this goes for Bahamians as well. We know these have been extraordinary times, and we will support the government in the VAT increase, but we are serious about expecting greater respect for buyers through more efficient service and ease of doing business, and that includes being creative,” Mrs Wallace-Whitfield continued.

“If you are looking at top dollar for the public purse, what concessions will you provide to encourage more commerce? Or is there a trade-off with reduced property tax at a later time?”

Prominent realtor Comrade Morley, the government seising their tenants’ rent collected by the Landlords, absolutely should make as much sense” as the PopoulacesCommoners' at large (PCAL) who must pay the government's VAT upfront?
What about you lobbying the government to be steering a little VAT tax break, toward the non-religious PCAL, yes?

Morley aint wrong. This is just dumb. The issue is not delinquent owners, the issue is government's inability to do its job...

@ComradeProud, far from dumb but it hasn't stopped Comrade Morley, and his Lyford Cay Homeowners, from experiencing in a bad way the symptoms resulting after the sudden, unexpected departure of the Reds, former finance minister KP, yes?

I am sure that these landlords have nothing to worry about. Our Government has always brought in more draconian laws to try and enforce laws that they are unable to do. All that will happen is in another 5-1o years they will have a real property amnesty. I suggest no one pays RP as you receive no benefit from paying on time, only those who don't pay will have a reduction put to the amount they owe.

@ComradeDawes, a sobering thought that was it not for the tax abiding PopoulacesCommeners' stewards which faithfully pay into the PopoulacesPurse, there wouldn't be any benefits at all to payout to assist the old-aged pensioners, nor to maintain and staff our hospitals and clinics, at the barest minimum levels, yes?

Makes no sense. Yet making sense no longer is a requirement.

I suspect Minnis and his good buddy Sebas Bastian have already identified the commercial properties they would like to see come on the 'for sale market' by hook or crook. lol

Has PM Minnis ever made any sense? it is a bit late to find this out.

Has PM Minnis ever made any sense? it is a bit late to find this out. I am always laughing at "the people time voters"