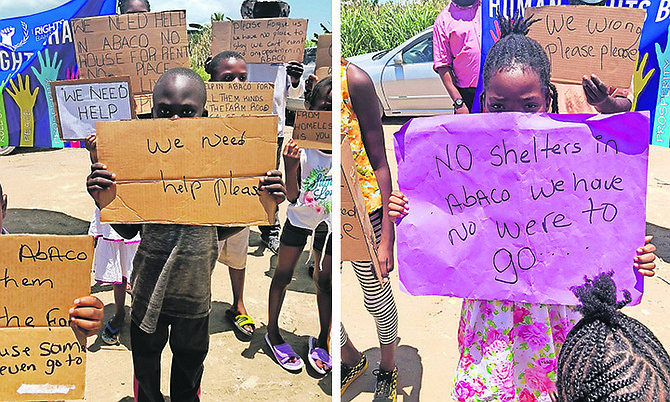 CHILDREN taking part in a demonstration in Abaco as a fact finding team from the United Nations visited the island to assess the handling of shanty town demolition.

ABACO resident Gerald François said he was distraught when he heard his home in The Farm had been destroyed as part of the government’s ongoing efforts to eliminate shanty towns on the island.

He said his feelings of helplessness quickly turned to anger when he learnt his 2012 Nissan Note had also been “crushed like a sardine can” during the demolition exercises.

When the 42-year-old first spoke to The Tribune last month, he said he feared for his future in view of the looming eviction and inevitable demolition of his newly built, 24 by 16 home.

Now living in a tent on the plot of land where his home once stood, Mr François said while he knew his home was one of the buildings that had been marked for destruction, he did not expect his car to be damaged during the planned demolition as well.

He said he believed officials destroyed his car because he had been vocal about sharing the plight of shanty residents with local and international media.

“My home and car were destroyed on Friday,” he said. “I had no idea because I was to work and when I got off around 4 ‘o’clock, at about 4.45pm when I entered the Farm Road, my friends was telling me I’m not going to like what I’m about to see. But before they could tell me, someone already call me to say ‘Bey they break down your car, they smash your car.”

Mr François said after learning about the government’s plan to demolish his home, he started to “take the house apart” because his co-worker had given him a piece of property to build on in the “meantime” and he wanted to reuse the lumber he had used to construct his home.

However, he said despite leaving a note on the door asking for a chance to dismantle the structure, when he returned home last Friday, he found his home broken down, and his car crushed with all of his clothes and documents inside.

“I was very p----d off (and) ... I didn’t really take the time to look at my car,” he said. “I just turned back to catch the officer who was dealing with a traffic accident on the Farm Road. I rushed up in the front and asked him ‘How do I go about (addressing) this?’

“They did that to me because I gave an interview to The Tribune, to ZNS and Eyewitness News. They spitefully did that to me. They knew I was staying there and they knew who I was.”

Mr François insisted he was targeted because he was “one of the young men” from The Farm “who had something to say” and stood up for himself.

“They probably got offended and that was a statement sent to me, that’s how I take it,” he said. “Because if a car is locked, you see clothes and stuff in the car, and then next to the car you see a tent, why would you break my car? The car could have never stopped the (equipment) from going around to break the house, it never was in the way, so why they choose to smash something that belongs to me and not the government?

“I understand you break the house, I’m not fighting for the house, I’m fighting for my car and my clothes and stuff that were damaged in the car. I’m staying in a tent with the same clothes I had on from work because how they mash the car, ain’t no way I could get inside to pick out my stuff from it. It’s smashed like a sardine can.

“When I started to take apart my house, I moved all the stuff and put it in my car and put my tent up. So they spitefully did that to me because I gave my interview to the media and it went viral and the international news stepped in. Even Channel 10 came here and they stepped in, so they spite me because of that.”

Over the weekend, delegates from the United Nations visited The Farm as part of their mission to this country. Mr François said although he saw the UN representatives, government officials did not allow them to speak with residents. He claimed when they arrived, the officials escorted them “straight to the back” of The Farm where they first started breaking down houses.

“They stand there for the longest until Bahamas Human Rights came to let us know... that was the UN representatives driving around with the Deputy Prime Minister, (and) by the time they saw the Bahamian Human Rights team, they turn around, jump in the jeep and escort themselves straight out of the Farm Road and ain’t say a word to the people,” he said.

Last month, the Ministry of Works spearheaded the demolition of 45 “incomplete and unoccupied structures” in the shanty town after posting eviction notices on several illegally erected buildings.

Mr François said many of the residents whose houses were destroyed are now living in cars and tents.

“If Sir Lynden Pindling was alive today, this would have never happened because Sir Lynden never fought for Bahamian people, he fought for black freedom in the Bahama Islands,” he stated.

“I don’t care what part of the Caribbean a black person comes from, there’s only one God, one people, one destiny. What happened to the Farm Road is injustice and inhumane.”

Legitimate Bahamian citizens are the folks who must now be on their guard. The illegals will likely resort to hooliganism and thuggery to survive. With no ability to reliably depend on law enforcement, the citizenry are left to fend for themselves without the ability to legally protect their property or family.

Many of the families affected by this are legitimate Bahamian citizens...

Why hasn't it happened already? Bahamians are quite violent on their own and don't need foreign help to achieve World Class crime statistics. You think it was illegals that sprayed a car with bullets in the middle of the afternoon, killing 6?

... how dare they have to follow the laws of the land? Doesn't the gov't know that they are a special, privileged class who have the right that Bahamians don't have, to do what they want, go where they want and build what they want how they want to?

I smell a lawsuit coming!