FAMILIES’ AGONY AS THREE SHOT DEAD: Yet another bloody toll on our streets as gunmen strike again 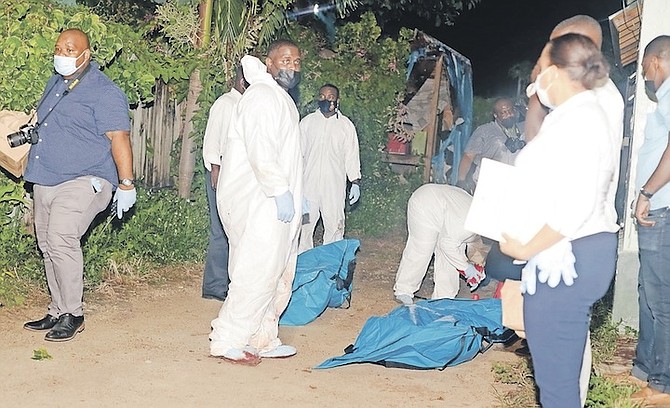 THE SCENE of a triple murder in the Fort Fincastle area where two men died on the scene and a third died of his wounds later. Photo: Donovan McIntosh/Tribune Staff

THE mothers of two men who were shot and killed during a triple homicide in Fort Fincastle on Friday night both said they are struggling to come to terms with their sons’ brutal deaths.

Police said they received reports of the shooting, which claimed the lives of three young men, shortly after 7pm.

They said when they arrived on Prison Lane, they found three men on a porch of a residence suffering from gunshot wounds. Emergency Medical Services were called to the scene and, following their examination, pronounced two of the men dead. While the third man was taken to the hospital and initially reported to be in stable condition, police confirmed yesterday that he later died from his injuries.

When he spoke to reporters at the scene on Friday, Assistant Superintendent of Police Audley Peters said initial investigations revealed a “group of persons were on a porch in Prison Lane, when two suspects armed with firearms discharged the weapons in their direction fatally injuring two and causing one to receive injuries about his lower extremities.” He said the two gunmen then fled the scene on foot. 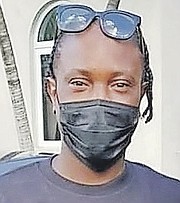 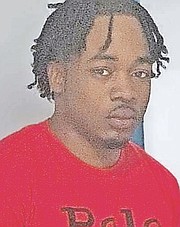 While officers have not released the names of the victims, family members say the two men who died on the scene were Gromyko “Yellow” Symonette, 23, and Kenneth Eulin Jr, 39.

Symonette’s mother, Monalisa Lee, told The Tribune that Mr Symonette’s relatives were devastated and distraught over his death.

“Me and my family was home and some little boys who live through the corner was up on the hill and they heard some gunshots and when they ran to see, they saw it was my son. So, they come run down the hill calling my name saying ‘Yellow get shoot,’” she said. “We still can’t believe it. He has a four-year-old child. I haven’t seen her yet but they tell me she can’t stop crying.”

THE SCENE of the shooting in the Fort Fincastle area. Photo: Donovan McIntosh/Tribune Staff

Ms Lee said her son, who was employed as a lifeguard at a popular hotel, was a “charming, jokey person, who loved to have fun”. She also said he and his sister were her only children and the two of them were practically inseparable.

“He was a fun person and he liked to kid and joke around so his presence will be missed a lot,” she said. “It’s really rough right now and my daughter isn’t doing too well either. A few people told me that some people were saying negative stuff about my son, but they are people from the neighbourhood who disliked him because he was a striving young man. I grow my children up striving to get what they want out of life and he always had a job. He was always working to take care of himself and people didn’t like that...but I’d like for them to stop with the negative talk because they don’t know my son.”

“Kenny was a loving, friendly person and he never been in the police’s hands, ever,” she told this newspaper. “My son was always kind and caring and he helped anybody who he could help.”

Mrs Francis said she lives on one of the Family Islands and learned about her son’s death after receiving phone calls from relatives in New Providence. She said her son was a jack-of-all-trades who worked hard for himself and his loved ones.

“Everybody’s been calling me but the family isn’t holding up well. We are not doing well at all. My son was a good person, even the neighbours could tell you how good and nice he was. He left behind two children; one is 17-years-old and the next one is four-years-old. Now both of them are girls without a father.”

On Friday, ASP Peters said officers were “unable to say” whether the shooting was gang related. He also said while retaliation is a “possibility”, the police force is “ready to respond.”

“Officers are on the ground and we could say conclusively that we were present as soon as we received the reports,” he said. “We’re appealing to members of this community who may have any information in regards to this incident to contact the police department at 502-9991/2. Additionally, I ask the community or individuals in the country, in particular New Providence, who are aware of persons in possession of firearms to report them to the police.”

ASP Peters said officers were “encouraged” lately due to the number of people who were arrested for being in possession of unlicensed firearms and ammunition. He urged the public to “continue to do their part” in contributing to the “eradication” of firearms from the streets so that local communities can be safe.

“It’s a sad situation that two persons could walk up on a gathering that were enjoying their Friday evening and now we have here two individuals who have succumbed to injuries as a result of the use of firearms,” he said.

“... I’ll go further to say that parents should be concerned in the rearing of their children (and) community members should be concerned in the rearing of the children of their neighbours, because any incident that is a misdemeanour, it grows from misdemeanours and becomes felonies. And so we can nip these attitudes, actions and behaviours in the bud (with the) community raising our children so we could see better behaviour from our citizenry; in particular our young men.”

Retaliation probably. Never heard of someone murdering someone else just because they have a job, robbing them yeah.

This is the end result of unemployment as people scrounge, steal, wheel, and deal trying to make ends meet!

Politicians are the cause of unemployment and crime!

It was politicians that encouraged illegal Haitian migration by awarding deportees $250.00 which is equivalent to the annual salary in Haiti.

It was politicians that sold work permits as a way of putting money in the treasury and caused 40,000+ blue-collar workers to lose jobs in the domestic sector.

Now, the chickens have come home to roost. Bahamians have had to turn on each other like scavengers and have been reduced to 3rd class citizens in their own country by the very same politicians they voted for to guide them in building the nation.

The state of our country is an undeniable indictment of the total failure of politicians who "lead" us to this place we now find ourselves!

Two males dead, two mothers speaking. No quotes from fathers because they probably didn't have any.

For too long the snake (of murder) was being beaten about the body whilst its head remains protected and untouched. Time for the police to form a special task force to investigate and dismantle gangs in this country. The leaders should be identified, arrested, and charged under the laws that are currently on the books. And there has to be a harsher penalty for these types of shootings and murders. Some of these men do the killings and are never caught. Some are caught and charged and sent to jail and to await trial. Some get released on bail before the trial and then they, themselves are murdered. So not many are making it to trial. Even fewer are being convicted. And jail, despite its challenges, has become like a big party house for criminals, murderers included. Loaded with young people who know each other, are not remorseful for their crimes, and are living at the taxpayers' expense. There has to be hard labor and conditions that make no one want to go there.