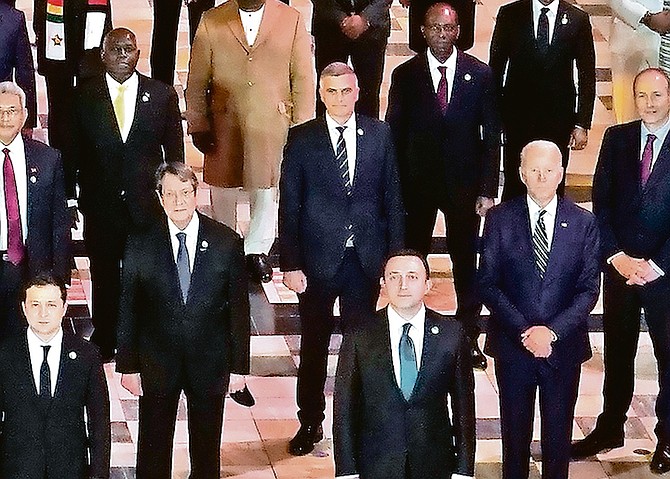 ABOUT 120 leaders came together in Glasgow yesterday at the start of COP26, launching two weeks of global negotiations to help determine whether humanity can drive forward the urgent action needed to avoid catastrophic climate change.

As the world experiences record temperatures and extreme weather pushing the planet dangerously close to climate catastrophe, the need for urgent action at COP26 has never been clearer.

Addressing leaders at the first major global gathering since the COVID-19 pandemic, COP President Alok Sharma said: “The science is clear that the window of time we have to keep the goal of 1.5℃ alive, and to avoid the worst effects of climate change, is closing fast. But with political will and commitment, we can, and must, deliver an outcome in Glasgow the world can be proud of.”

Leaders were also addressed by poet Yrsa Daley-Ward, whose specially commissioned poem Earth to COP includes the lines: “Anything less than your best is too much to pay. Anything later than now, too little, too late. Nothing will change without you.”

And campaigner, Kenyan environment and climate activist Elizabeth Wathuti who said: “We need you to respond with courage to the climate and ecological crisis…for these next two weeks – which are so critical for the children, for our species, for so many other living beings – let us step into our hearts.”

COP26 brings the major emitting countries face-to-face with the countries most vulnerable to climate change. The World Leaders Summit will send a clear signal to negotiators to be as ambitious as possible and agree to a negotiated outcome that accelerates action this decade.

Moving from the promise of Paris, announcements in key sectors will start to show how Glasgow will deliver. This includes new commitments on consigning coal to history, electric cars, reducing deforestation and addressing methane emissions. Building on the publication of the $100 billion delivery plan, which the presidency requested the Canadian and German governments lead, finance will remain a key priority. Discussions will centre on how the countries most vulnerable to climate change can access the finance needed to deliver climate adaptation and boost green recovery from the pandemic.

Further to the commitment to mobilise finance, the opening of COP26 saw several new finance announcements to progress action on the $100 billion and address adaptation finance.

Later Prime Minister Johnson will host a roundtable on “Action and Solidarity” bringing campaigners on climate together. This is expected to include Samoan climate campaigner Brianna Fruean, Brazilian climate campaigner Walelasoetxeige Paiter Bandeira Suruí, and Kenyan youth activist Elizabeth Wathuti, together with some of the biggest emitting and climate vulnerable nations to set the tone for negotiations at COP26.

I wonder how much carbon was emitted transporting all these world leaders and their entourages to and from this useless get together? More than a billion pounds probably. When they make their restrictive rules, it'll only apply to the masses, not for them. Hypocrites.

Where are the markets for all of the Amazon, Congo and Indonesian rain forests trees that are being cut down?

Where are all of the Third World minerals and commercial crops that are being mined or grown being exported to?

Where is all of the oil that is being taken from Nigeria, Brazil, Middle East, and Guyana being sold?

The Third World resources are being used by the First World to enrich themselves, and in the same breath destroy and enslave the Third World. Vicious cycle

Ah yes, the new cult of the day.

Man in all his arrogance thinks that he can usurp the role of God and control the shifting of earth's climate. The climate has shifted for a lot longer than any of these people have been around. This is what happens when a society refuses to acknowledge the Most High.

How many reusable bags do you think these people are using? I seem to remember quite a few having plastic cups photoshopped out of their pictures to avoid exposing them for the giant hypocrites that they are. Funny how so many of them own beachfront property too if the sea levels rise as fast as they say that they do. Would be a pretty stupid investment if so, don't you think?

Instead of travelling all that way for a photo op with the senile president, why not start here with some measure to reduce pollution in the Bahamas?