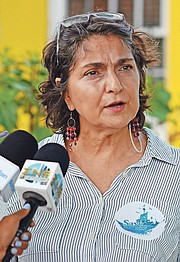 AFTER Prime Minister Philip “Brave” Davis’ speech to world leaders, one environmental activist has called out the government’s response to local environmental issues.

“So we should do nothing, but fly around and beg for money? Perhaps the developed polluting countries would be more inclined to help if they didn’t watch us approve some of the most devastating projects that have huge implications for climate change,” she said.

“To date they have not responded to our continued requests for a meeting regarding the ill-conceived greenhouse gas spewing (from the) Disney cruise port,” she said.

“We have allowed the cruise industry to infiltrate some of our most delicate and fragile marine protected areas.

“Our environmental review process is nothing but a sham covering up for proper consultation and honest review of projects.

“We thought this was a ‘new day;’ sounds a lot like same day, same vacant rhetoric.”

Last month, Ms Duncombe suggested The Bahamas pivot away from the multiple cruise industry investments which the Minnis administration had been promoting, such as Disney’s Lighthouse Point project; ITM/Royal Caribbean’s Grand Lucayan agreement and Carnival’s Grand Bahama private port, describing the sector as the “most highly-polluting tourism product we can offer”.

Thank you Sam Duncombe for holding our leadership accountable! The cruise ship industry is a scourge to our environment and economic development. They invest very little in the country compared to land-based operations and there's significant asymmetry of power, knowledge and negotiating leverage for Bahamians. When things aren't going their way they can sail away.

At least Oban was proposing a state of the heart facility on barren land in the middle of no where compared to the 2 current old environmental disastrous facilities … and thousands of high paying technical jobs on what was supposed to be our “industrial” Island due to proximity to the US and relatively uninteresting flat topography making it unattractive for tourism … as has clearly now been proven with the failure of all large hotels.

He didn't even call Communist Red China out by name as being the world's single largest polluting nation by far.

How can these SIDS call out the BIG polluters? Can you cut off the hand that feeds you?

The whole COP26 thing is a sham because China accounts for 40% of the worlds pollution and every country is begging China to make their products to consume. The USA, just like 242, is compromised on the issues of environmental pollution & climate change.

We are just heading down that inevitable road to global destruction due to inaction & greed.

Yeah ! Forget about all our bunker-c fired power plants, the intentional sabotage of solar roll out for decades, Cliffton oil spills, dumps on fire every week, millions of tons of plastic sh... imported every year to support our consumer lifestyle........we need to blame them other human beings for global warming

You obviously have never experienced first hand the very severe pollution that exists in most of Red China's largest cities. Just visit any one of their top 50 largest cities on a hot, humid and windless day. Trust me, you would never forget the experience of gasping to breath outdoors without physical exertion.

Many said Mr: Davis gave a good speech, She disagrees. What I remember about her most is when the dredging was done in the Exuma Sea Park. Did she speak out or was she silent?

I lost all confidence in her right there. I remember a man was arrested in Exuma for voicing his disagreement.

I love the environment of the Bahamas. and I believe it is important.

It may not be": A NEW DAY" for Mrs: Duncombe is it more like "It is your future" just asking?

She bought politics into the matter.