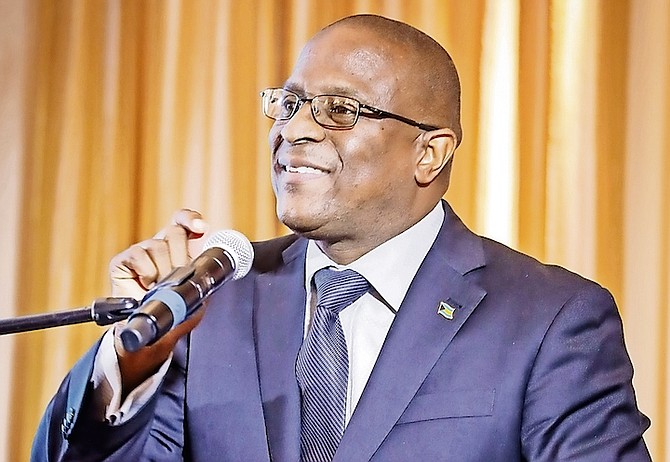 Michael Pintard at the event at the British Colonial Hilton to launch his leadership bid for the FNM. Photo: Racardo Thomas/Tribune Staff

MARCO City MP Michael Pintard pledged to shake up the status quo and unify the different factions of the Free National Movement as he launched his leadership bid last night.

“We regularly need to refresh the organisation,” Mr Pintard said, “embracing the new without alienating the veterans. Not only can we co-exist, we must co-exist. It really does not matter if you are pre-92 FNM or post-92. It didn’t matter if you came from a neutral place, an independent voter or you were PLP before, you with us now, you still family.”

“We are embracing all of those who wish to cast their lot with us. We’re welcoming you back home and for those of you that are in a house and you’re uncomfortable we just want to let you know that we have room in the inn.

“If you left on your own or you felt as if you were pushed out, I’m telling you we need you, we are weaker without you. Everybody who leaves carries this sphere of influence with them.

“And so tonight I’m offering myself for leadership because I believe that our organisation should be a meritocracy. In other words, people’s talent should determine whether or not they are going to achieve greatness and not because they are attached, in relationship to somebody with power. Loyalty is important because in politics if you don’t have loyalty you may be short lived. However, loyalty should not be the most important core value because loyalty and incompetence is a problem.”

Mr Pintard’s call for unity is a key pitch in his campaign as some insiders believe former Prime Minister Dr Hubert Minnis alienated some factions of the party with some of his decisions and his leadership style.

“We need leadership that can handle a difference of opinion,” Mr Pintard said. “It’s a wonderful thing to be in a room with a bunch of smart people and it’s always good to have some folks in a room much smarter than you.

“This is an ego business for a lot of folks. There’s a lot of testosterone in the room, that’s why we need more women in leadership in the Commonwealth of The Bahamas. Many times people are getting in fierce arguments not over deep ideological issues, not over issues that determine whether someone lives or dies, can feed their family or they can eat, but over procedure or process. Many of the arguments in the House of Assembly (are) about minutiae, it is not about the hundreds of people in Grand Bahama right now who are without light or those in New Providence and so we have to be careful. We have to be careful that the public can clearly see and hear that when we are animated and agitated it is on their behalf that we are.”

The FNM’s leadership convention is set for November 27.

Time for NEW BLOOD outside the innerworkings of the FNM

Iram Lewis is a complete non-starter and Kwasi Thompson is dingbat Minnis's little tool. That leaves only Michael Pintard.

Just reading some of what he said shows he has a fresh way of thinking and is about inclusion and openness. Starting off in the right direction on what kind of leader this country really needs.

Best choice in the lot that are offering for the FNM leadership.

I feel bad for the FNM. The words 'slim pickings' come to mind.

After Ingraham quit slim pickings got them Minnis and what a tragedy! I guess the one comfort they have is at this point, ANYONE absolutely ANYONE is better than Minnis so good luck and God speed Pintard.

Slim pickings is correct. I think they do themselves and the country a disservice when they limit their choices to 7 men then justify it with 500 votes. It almost seems ridiculous... especially in light of the fact that 170000 will decide the election... might have been a good move to ask them what they thought

Six off one-half dozen of the other. The FNM party has not had good leaders.. They seem not to attract the Bahamas best.. Their motives so far have been questionable.

In order to continue their plight for picking bad leaders, I say pick Kwasi and lewis that will seal their deal.

The FNM, by nature is factional, based on the history of the Party. However, Mr. Pintard, if he says what he means and means what he says, MUST unite the factions that he named IF the Party has a fighting chance to bear the PLP in 2026. We shall see.