A COMIC'S VIEW: Speaker Deveaux raises eyebrows in the House 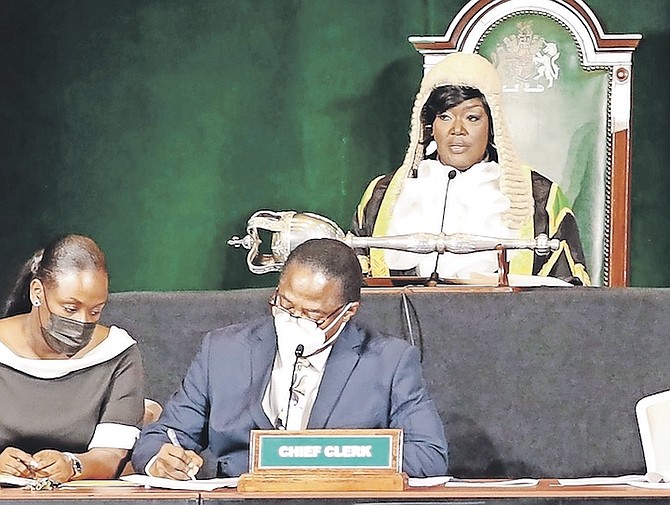 SPEAKER of the House of Assembly Patricia Deveaux.

IMAGINE living in a time when you have to be careful about the air you breathe because a deadly virus is in the air. Now because this same virus has led to a pandemic that has also wrecked your country’s economy, imagine having to worry about your job, having enough money to feed your family, and the education of your children.

Now imagine yourself slogging to the polls just a few weeks ago (while dodging and ducking the same virus). Imagine electing a new government and thinking to yourself, “Okay, these new people are gonna get to work on the pressing national issues while I work to figure my pressing problems out.”

Then imagine, after a long day of work, flipping on the parliamentary channel and watching these same recently elected politicians engage in shameful verbal slugfests about petty political issues in the House, as you silently seethe in exasperation.

Well, imagine no longer because that nightmare is pretty true to our current reality.

BRINGING DOWN THE HOUSE

During the last Minnis-led administration, it was the worst of times, and the “worsa still” of times watching debates in the House of Assembly with former Speaker Halson Moultrie in the chair. Moultrie was often gruff, unbalanced, antagonistic, and appeared to have many axes to grind.

By the time he demitted office, Moultrie had faced a vote of no confidence (naively turned into a ‘vote of confidence’), had resigned from his party, and had attempted to grab the (figurative) scalps of myriad members of parliament; up to and including the former prime minister.

To put it succinctly, his reign was a mess.

There aren’t many debates around whether he was the worst-ever Speaker because it’s pretty much universally agreed.

Bahamians certainly had enough of the “bad Speaker”. Both major political parties were done with Moultrie. Even his former constituents (aside from the eighty-three likely family members who supported him in 2021) had had enough of his antics.

Most Bahamians are rightfully weary of the nonsense that has generally surrounded our parliament for far too long.

Now don’t get me wrong, I’m quite aware that in other parliaments “carrying on bad” is a part of the process. In some countries, MPs have gotten chairs to the head and fists to the face. In the UK, where we’ve inherited our parliamentary traditions, things can get loud and rowdy.

But we’re exhausted. Maybe those other places have substantive things to show for tolerating decorum-less political divas, but we “ain’t on that run”.

So it was dissatisfying to see things pick right back up where we left off in August despite a change in government.

New Speaker and Bamboo Town MP Patricia Deveaux was lauded early on as only the second woman to occupy such a high office. Sadly, her performance is already raising eyebrows.

In the court of public opinion, Speaker Deveaux has been accused of not playing fair.

Many were disappointed to watch her demeanor this week when dealing with the Official Opposition, because it came across as unnecessarily combative. She has, on the other hand, allowed noticeable leeway to the governing party. Her party.

Since these are early days yet, I’m inclined (for the moment) to give the new Speaker the benefit of the doubt. Perhaps she’s nervous? Is she a naturally “vexatious” person? Or maybe she had a bad case of gas from a gas-station hot patty for breakfast that morning. The possibilities are endless.

(And, in the off chance you’re reading this, Madame Speaker, remember; I’m light-skinned with softer hair than Dr Darville. By your standards on the campaign trail, you and I should get on famously.)

I have no idea why the Speaker repeatedly excoriated and chastised opposition members while showing deference to persons like her party “chairman”.

What is clear is that things can not continue on this track. Most Bahamians want our politics to mature because the way things have been going hasn’t been beneficial.

The tone of the House falls at the feet of the Speaker.

So have your debates, but try to also “catch sense”.

As members stand there in our “hallowed halls”, squabbling and dividing us up into FNM or PLP supporters and arguing about who should or shouldn’t have jobs (or those oft mentioned “juicy” contracts), everyday Bahamians are suffering.

Moultrie currently wears the crown for presiding over the most “brokedown” parliamentary palace ever. Still, it would be good to heed the words of professor Randy Pausch: “No matter how bad things are, you can always make them worse.”

While it was child’s play in the House, Prime Minister Davis was globetrotting in the name of saving this country from the devasting effects of climate change.

While there, Davis rubbed shoulders with other world leaders, gave a well-received speech, visited a bar, and took tons of selfies.

He has had a whirlwind press tour, appearing on global network television shows, and got cited on bloomberg.com for having the “quote of the day”.

And it was a good quote.

Based on general feedback, the tour has been a success, and that’s good for the country.

Outside of the style, however, there’s the substance with which to contend. Substantively, the PM says he wants to come back from Cop26 with something concrete.

So now he has to “secure the bag”.

We wait with bated breath to see the fruits of his labour (specifically, we want to know how much cash and what new technology Brave will bring back.)

Some questions also need to be answered, such as this administration’s stance on oil drilling.

It’s safe to say the words “environmentally friendly oil drilling” likely did not cross his lips at Cop26.

If Davis is going all-in to lead the charge in the climate crisis, which is a good thing, he must come to terms with his administration’s policies at home. Because another thing you can’t outrun is being branded a hypocrite when your actions don’t match your words.

I could already see trouble coming with this new speaker. Lord help us, another 5 years of foolishness. At least Brave didn’t embarrass us in front of the world. Let’s see if any actions behind all the flowery words.

"The British constitution presumes more boldly than any other the good sense and the good faith of those who work it." - William E. Gladstone

With that being said, it is quite clear that both this speaker and the last have no idea of the role that they have been elected to perform. The Speaker should be forced to resign from their party as is the standard in the United Kingdom.

To be quite frank, the Westminster system is far too civilized and orderly for the calibre of politicians that we have representing us today, and it needs to be replaced with something that more accurately reflects our banana republic values.

Good points, but Bahamians only care about the freebies that they can get from their politicians and not what they do in the House.

That is one of the reasons, this country needs a real system of local government. It will allow people to learn and practice governance and management. How we operate here, is one day you are joe blow and the nest day, you are a government minister.

Do you have any clue of the glorified system of local government that presently exists in the Out Islands? That template can't do much to teach anyone how to be a MP.