INSIGHT: Will Brave words be backed up by bold action? 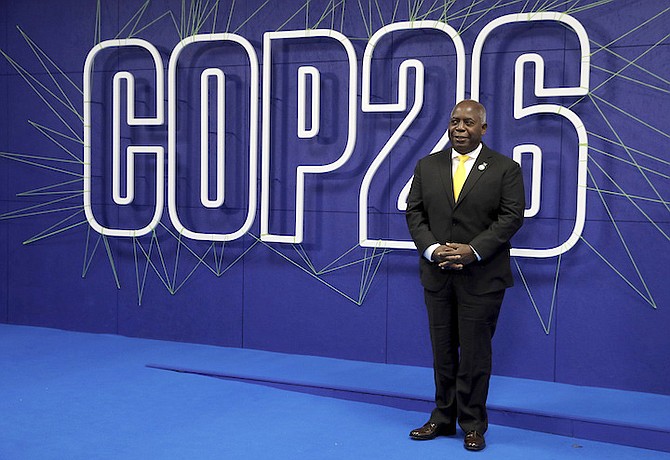 IT has been a good week for Prime Minister Philip “Brave” Davis – with the spotlight falling on him as he spoke at the international climate conference in Scotland. But now he has come home to real questions about what The Bahamas’ role will be in the battle against climate change.

Mr Davis must be commended for catching the world’s attention at the conference. When he spoke about how “we cannot outrun your carbon emissions, we cannot outrun the hurricanes which are growing more powerful and we cannot outrun rising sea levels, as our islands disappear beneath the seas,” he painted a picture in stark terms of the dangers facing us, and in doing so was picked by Bloomberg for its quote of the day.

He went on to talk about Hurricane Dorian, and how we still don’t know exactly how many died – another priority for this government to pick up from its predecessor. That has to be something the government pushes to clarify rather than just use as a soundbite, so we hope to hear more.

“People will be forced to flee... but flee to where? These are my neighbours, my family, my friends. My plea is both urgent and deeply personal. And I make it on behalf of all humanity.” 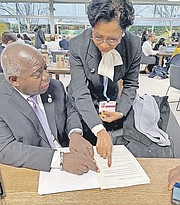 That’s no exaggeration of the risks – it has long been predicted The Bahamas would see islands being submerged as seas rise because of melting ice caps.

So well done, Mr Davis, for speaking so plainly – but what next?

Well, he has given some indication of the way forward since his return from Scotland. He indicated he is “not minded” to allow oil exploration in the country. That may be a low-hanging fruit given there are no current companies with oil licences, although the former Bahamas Petroleum Company has said it is seeking to obtain some.

More crucially in that statement, he said that one of the things the country is doing is “we are moving towards monetising our carbon credits so that at the end of the day that if we need new revenue streams to provide the services that our people need and I could get it from the monetisation of my carbon credits.” In other words, using our position as a low level polluter to generate income for the country. That doesn’t directly address anything to do with the environment itself but rather serves as a way to bring us more funds.

Money seems to have been at the core of a number of meetings too, with Mr Davis saying: “We explored ways of securing financial support, especially in relation to the management of debt and driving economic growth, technology and other support, and the need to improve our infrastructure and defences against the adverse effects of climate change.”

So, more money – but what will we do with it?

Mr Davis has already put one action plan in place – albeit a peculiar one.

He said: “I am happy to report that the Office of the Spouse will be incorporating issues on climate as a top priority. This will support the urgent work we need to do to sensitise Bahamians to the actions that are needed to make our country more resilient.”

Not to belittle the Office of the Spouse, but that’s a big job for an office with a small budget. And, for that matter, an office that not so long ago the PLP were opposed to and which the current occupant only found an interest in after being briefed by civil servants, apparently.

So far, there has been little indication of concrete action. For example, what are the infrastructure upgrades for which Mr Davis has been asking for funding? Where are we planning to place flood walls? What preparatory work are we doing for when such a need arises?

Beyond that, there has been little talk of switching from our own use of fossil fuels or to introduce greater incentives for renewable energy. With so many of our road journeys being a short distance in comparison with residents in other countries, there is an opportunity to encourage a switch to electric vehicles for many citizens. That will require creating the infrastructure to support such vehicles – not least of which is the ever-present challenge of Bahamas Power & Light – but with so little talk about such projects, it is clear it is not a high priority. Or at least, not yet.

Among those unimpressed by Mr Davis’ speech was reEarth president Sam Duncombe, who called it “entirely underwhelming.” She got to the heart of the matter when she asked: “So we should do nothing, but fly around and beg for money?”

She continued: “Our environmental review process is nothing but a sham covering up for proper consultation and honest review of projects.

“We thought this was a ‘new day;’ sounds a lot like same day, same vacant rhetoric.”

This is, of course, still the start of this new administration, but that is also the start of an opportunity to make sure there is action as well as words. Mr Davis has won plaudits for the speech he gave. Imagine the praise he would receive if he backs it up with action.

The Bahamas is renowned for its beautiful waters and its environment. Mr Davis has the chance to make it a leader in fighting to protect those resources. It is in his hands.

But MS Sam Duncombe. who had no problems with the dredging of the Exuma Sea Park? If she did I stand to be corrected. Is she selective??

Will Brave Words Be Backed Up By Bold Action? No

What bold action are you talking about??

The article asked the question. I gave my answer which is no. We are a nation of talkers. I don't expect any change

Out of sight out of mind. Well meant.