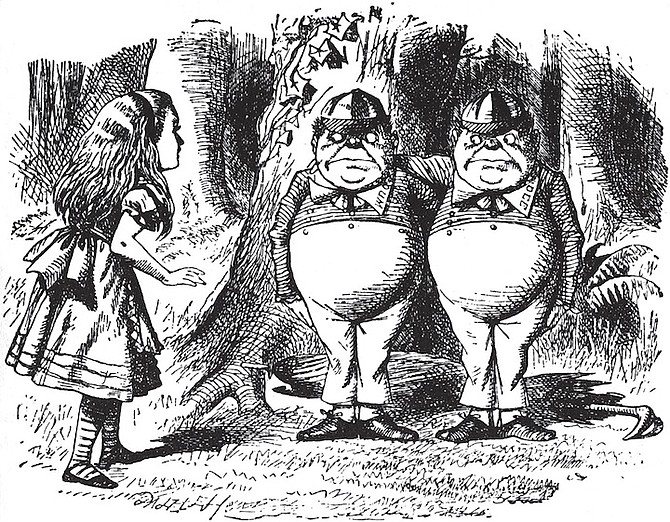 DO we really need to go through the looking glass to reach a world where we can tackle obesity?

SOME of the most beloved children’s novels lie within the portal fantasy genre. The Wizard of Oz, Alice in Wonderland, The Chronicles of Narnia and Harry Potter are just a few standout examples.

In them, the lead characters are given the opportunity to be transported to an unreal world and once there, their true adventurous journey begins.

The unreal world becomes real in children’s novels and in the lives of many adults because it affords the opportunity to overcome any issue or crisis they would struggle with in the real world.

In the fantasy world, they have the freedom to be someone else, someone better. All in the hope that this visualised perception of who they want to be is ultimately actualised when the story ends.

Many times, they tackle subjects like strength and courage, overcoming obstacles, racism and good vs evil; all of which are familiar topics that have and continue to fuel many novels and blockbuster movies.

Few, if any, focus primarily on fitness, health and wellness and to the best of my knowledge even fewer tackle the obesity epidemic. Why authors don’t discuss it more openly escaped my understanding until writing today’s report.

It’s because in our society, beauty has become synonymous with self-worth and never more so than in the age of Instagram. So, with that understanding, to be obese is to be worthless and unattractive and, therefore, unworthy to be the hero of any given novel. As hard as we in the medical profession try to obfuscate this destructive lie, this media-driven perception unfortunately persists.

So, the subject is blatantly avoided to the point that it’s become easier within our society to talk about racism and abuse than being fat. But how can we correct a problem if we first don’t acknowledge that we have a problem and then refuse to address the other health ramifications that have metastasized because of that same problem?

To add further substance to this discourse is the fact that it is abundantly clear that many of the deaths attributable to COVD-19 across the globe occurred notably in patients who also suffered with non-communicable diseases (NCDs) like diabetes, high blood pressure and high cholesterol.

Such aforementioned NCDs were in turn either caused or exacerbated by being overweight, having a sedentary lifestyle or both. COVID-19 has furthermore exposed many of the vulnerabilities within our fragile, underfunded health care system.

An aggressive solution to fixing these vulnerabilities must encompass a preventative focus that aims to improve not only the quantity but also the quality of those lives that are ultimately saved.

The fact that the Ministry of Health has added wellness to its portfolio suggests the current government is of the same mindset.

At the age of 20, one of my former patients weighed over 300 pounds and after giving birth to six children it climbed to over 400 pounds.

As a youngster, she may have been told she was pleasantly plump. But as her weight increased over the years, so did her reluctance to engage in exercise.

Even the act of walking caused burning and pain in her feet, legs and knees so she became increasingly sedentary. She was also inconsistent with taking her high blood pressure and diabetes medications.

Her health further deteriorated after she contracted Hepatitis C through an adulterous relationship with a neighbour and close friend of her husband of almost 30 years.

Her breathing was intensely laboured when performing everyday tasks and she found it incredibly difficult to sleep when lying flat.

She related that it felt as though she was choking on liquid and refused to see a cardiologist.

In fear that she may choke in her sleep and die, she resorted to sleeping while sitting in an upright position.

She soon developed lymphedema where both her legs became swollen, hard and hyperpigmented and on a Sunday afternoon, while in the bathroom, she fell, hit her head and lost consciousness.

By lying flat for that prolonged period of time she was unable to breathe and by the time her lifeless body was discovered by her eldest son, she had already succumbed to her injuries.

She died alone on her bathroom floor at the age of 48.

The day she purchased and walked into her home for the first time she cried for hours. It was a small modest home but it was hers and other than her children, she felt it was her greatest accomplishment in life.

I suspect at her age she never imagined that four men would visibly struggle to lift her demised body out of the very same home that she so deeply cherished.

As opposed to beloved children’s novels, unfortunately for us we can’t just travel to a fantasy world and then click our heels to return home a better version of ourselves. So instead, you have to have the desire to improve your health and then you have to be willing to work.

I would also be remiss without mentioning that many cases of obesity stem from some untreated psychological trauma that must simultaneously be addressed.

Fitness Guru Jimmy Mackey refers to it as the “show-up mind-set”. Showing up is half the battle but if you can at least do that, and put in a little more effort every day, then any fitness goal can be achieved and eventually surpassed.

Dorothy told Toto it was time to go home and clicked her heels three times. Together we’re telling you that it’s time to get healthy and there’s no better time than today.

• Nicknamed ‘The Prince of Podiatry’, Dr Kenneth D Kemp is the founder and medical director of Bahamas Foot and Ankle located in Caves Village, Western New Providence. He served as the Deputy chairman for the Health Council for 5 years and he currently sits on the board of directors for the Princess Margaret Hospital Foundation in his role as co-vice-chairman.