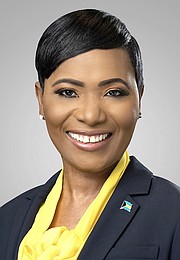 GRAND Bahama Minister Ginger Moxey says the government has relaunched plans to facilitate training to increase the employment of certified Bahamians at the Grand Bahama Shipyard.

She was referring to the Grand Bahama Shipyard Employment Programme, which was initially implemented during the Christie administration, but discontinued in 2017.

Minister Moxey said job creation is a top priority of the Davis administration.

“It is this administration’s plan to facilitate training, certification and placement for tradesmen. The work to recover, rebuild and revolutionise this initiative has already begun, since this is what happens in a new day.”

She noted that during the last Progressive Liberal Party administration, the programme was established with the goal of training, certifying, and employing 600 Bahamians to replace expatriate workers at the facility.

Up to May 2017, some 250 Bahamians were trained and employed at the shipyard, which Ms Moxey described as “a remarkable accomplishment.”

She noted that the Grand Bahama Shipyard provides substantial revenue for the island, as well as hundreds of jobs.

She added that it is currently undergoing a $350m reinvestment, which bodes well for Grand Bahama.

The minister noted that there are other training initiatives to help develop and prepare young people for the maritime industry.

Ms Moxey indicated that a partnership has been formed with Bahamian entrepreneur and Pineridge businessman Elbert Hepburn, of Elnet Maritime Agency.

She said that Mr Hepburn has created a maritime training institute to introduce the world of maritime to young people of Grand Bahama.

“I applaud Mr Hepburn for this exciting initiative, and we have partnered with him for a programme called ‘Maritime 101,’ she said.

“This administration will capitalise on the ongoing successes of the industrial sector on Grand Bahama and use the investment arm of the Ministry for Grand Bahama to create a one-stop shop to attract new local and direct foreign investment,” Ms Moxey pledged.

On the topic of tourism, she said the government is committed to resolving the situation concerning the Grand Lucayan resort.

“The honourable member for the Exumas and Ragged Island expressed his commitment to finding a solution to the Grand Lucayan mess created by the former administration, as well as providing concessions to encourage domestic and foreign direct investment in the island of Grand Bahama,” she said.

She also stated that there are plans to revive sports tourism on Grand Bahama.