STATESIDE: It’s not easy keeping pace with the polarization of American politics 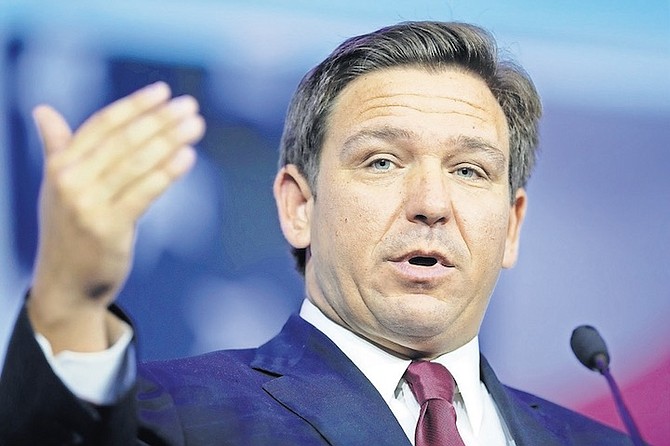 GIVEN the choice, most of us would probably prefer a public figure or politician whose views are plain and consistent. That way, at least we know who and more importantly, what we are voting for. One of the most damaging criticisms of politicians in recent decades has been the charge of “flip-flopping,” especially in American elections.

Historians now attribute George H. W. Bush’s stunning loss in the 1992 US presidential election to his reversal on increasing taxes. Many will recall his earlier boast that voters could “Read my lips: No new taxes.” But he then acquiesced in a large tax increase that underpinned the big Internet boom and widespread prosperity of the 1990s in the US.

In the 30 years since, the exponential polarization of American politics has often been debated. Civility and bipartisanship in the US legislature have ebbed and now seemingly often disappeared altogether. Parenthetically, this continues to belie and undercut President Joe Biden’s hopes and expectations for the eventual success of his most important legislative initiatives. Many remain sceptical of the President’s agenda, even after passage of the massive infrastructure bill.

Repeated outrageous statements and even actions have proven to be among the most effective means of becoming known and attracting not only political followers but also surprisingly large campaign war chests.

Consider Representative Marjorie Taylor-Greene of Georgia. Not so long ago, nobody outside her district north of Atlanta had ever heard of Taylor-Greene, and that fact would have surprised few and disappointed even fewer. Now, after a couple of years of outrageous public statements and outlandish behaviour, millions of people have heard of this Republican congresswoman, conspiracy theorist and ardent Donald Trump supporter.

She has become famous and probably much wealthier as the result of her ability to attract public attention. And no one who has heard of her doubts what she stands for.

Maybe she read Trump’s political playbook. He has often said “no publicity is bad publicity.”

Someone else has also read that playbook. This person is much more important than Taylor-Greene, with much more at stake politically. That person is Florida Governor Ron DeSantis.

As DeSantis has rapidly risen from obscure congressman from near Orlando to Trump’s preferred and ultimately successful candidate for Florida governor, DeSantis has left little doubt where he stands on some of the major issues of this tumultuous political era in the US.

At the heart of DeSantis’ message is individual liberty and freedom. He has fully embraced – some would say led – a nationally appealing pushback against government “mandates” in two areas of vital concern to millions of Americans. One is public education. The other is public health.

The fact that DeSantis leads perhaps the most politically significant American state makes it all the more important to pay close attention to this rising star. Among the giant states in the US these days, California, Illinois and New York are basically blue. For a variety of reasons, they are likely to remain reliably Democratic for the near term and beyond.

Texas, with its surging population growth and magnetism for immigrants, will probably remain a mirage for liberals who are hopeful that changing demographics will lead to the state’s release from the current political stranglehold exercised by Republicans and their conservative allies.

Even committed liberals in the state have found it necessary to acknowledge that formerly reliably bellwether Ohio has turned red. Perhaps nowhere else has the Ronald Reagan effect been felt than in the Buckeye State, where Reagan’s appeal to blue-collar rust belt workers both weakened the political influence of labour unions and energized a rural conservative base that has enthusiastically embraced both the Tea Party and Donald Trump.

All these changes and non-changes have propelled formerly true-blue Michigan and Pennsylvania into the national discussion as “swing” states, as well as formerly ruby red North Carolina and Georgia as perhaps trending purple.

But Florida has not only the nation’s third largest population but a politically more evenly divided electorate than any other large state. While both current senators are Republicans, as is of course the governor, the Sunshine State’s major population centres are still up for grabs and, if the Democrats can unite behind an appealing gubernatorial choice in next November’s election, the incumbent may face some serious headwinds.

Of course, that may turn out to be a big “if”. The best Democratic candidate may be former governor Charlie Crist. The recent fate of former governor Terry McAuliffe, who lost in a re-election bid in Virginia just two weeks ago. Running someone seen as a retread should be a cautionary note for Democrats in Florida.

Meantime, DeSantis is staying true to his course. The governor is reportedly planning to call a special state legislative session in order to pass legislation which he has claimed will offer the state’s residents “medical freedom.”

“I will not let the heavy hand of government force Floridians to take a shot,” DeSantis tweeted last month. He then had his state sue the Biden administration in an effort to invalidate the US government’s vaccine orders for federal employees and contractors.

“In Florida, there will be no vaccine mandate for children in our schools,” DeSantis has said repeatedly. “This is a decision that belongs to parents.”

Florida’s state health department maintains an email account designed to receive complaints from citizens about businesses or even local governments that try to impose vaccine mandates.

There’s reportedly a current list in the governor’s office of supposed miscreants, including Starbucks and AT&T. The list also includes Ashley Hannah, the proprietor of a yoga studio near Jacksonville who faces potential fines of $100,000 from the state because she has taken the radical step of offering yoga classes for only vaccinated customers, in addition to her regular classes.

“I just don’t understand this,” she told the Washington Post. “We’re a small business. If we didn’t have at least some classes only for the vaccinated, we would lose those customers. We wanted to give people a choice.

Leon County, location of the state capital of Tallahassee, has recently been hit with a $3.5 million fine from the state for the astounding transgression of imposing a mandate on its workers who interact with the general voting public all the time.

Alachua County is home to Gainesville and to Florida’s well-regarded flagship public liberal arts University of Florida. The county defied the governor’s ban on mask mandates when their school district began suffering from a rise in COVID-19 cases. DeSantis’ department of education announced this reasonable measure nonetheless violated a “parents’ bill of rights” passed by the state legislature, and withheld school board salaries as a punishment.

More than $192,000 has so far been pulled back by the state. This started a tug of war with the federal Department of Education in Washington, which has made up for the lost funds via grant money.

Alachua County’s school superintendent told the Post: “It’s obviously concerning, and scary, because he (DeSantis) is a powerful man. There is an enormous amount of pressure. (Imposing the mask mandate in school) was what I needed to do as a mother, an educator and as a human being.”

Elsewhere in Gainesville, the University of Florida has been celebrating its anointment by US News and World Report as the nation’s fifth-best public university. As if to make up for a discouraging season by its perennially powerhouse football team, the university boasted of “a milestone decades in the making.”

But wait. That No. 5 ranking is now threatened by the university’s accrediting agency, the Southern Association of Colleges and Schools. That’s also arguably because of Governor DeSantis.

Fearing backlash from the governor and restrictions on the state’s massive financial support, the university’s administration last month refused permission for three of its eminent scholars to testify in a controversial voting rights case involving the state government. The professors sued, alleging impingement of their First Amendment rights to free speech, and forced a course reversal by the university.

The accreditation agency has announced it will examine what happened.

Politics in Florida will be riveting for at least the next year. And we, like it or not, have a ringside seat.

Charlie Harper...............Socialist Democrat boot licker. The Tribune can do much better.

We either need a more impartial writer about American politics or drop the column altogether. Every week is criticism of the Republicans while Democrats are lauded. Why do we need this column? We should be having more stories about our Caribbean neighbours and/or the U.K. and our Commonwealth allies.