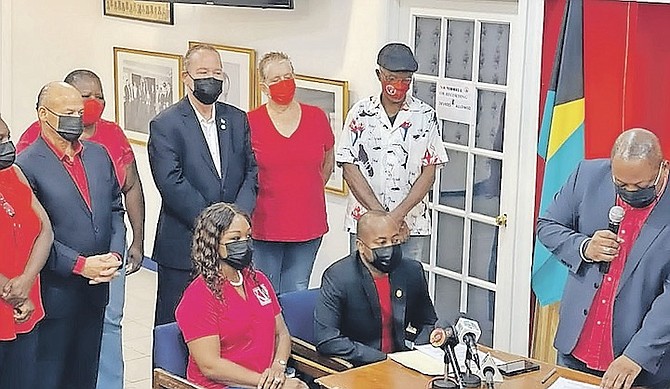 A photo from Kwasi Thompson’s Facebook page showing him handing in his nomination form at the FNM headquarters.

EAST Grand Bahama MP Kwasi Thompson yesterday officially submitted his nomination form to the Free National Movement as a candidate for the leadership of the party.

In remarks to supporters and party officials at the FNM’s headquarters, Mr Thompson doubled down on his promise that he is the right man to unify the party, adding politics was not about power, but about service.

As he voiced support for Mr Thompson yesterday in an interview with The Tribune, Mr Moore said he preferred the former state finance minister because he was seasoned and had the best personality to pull the party together.

The FNM will convene its one-day convention to settle the leadership issue on November 27 at Holy Trinity Activities Centre.

“We must continue to focus on uniting our party,” Mr Thompson said. “That must be our focus moving forward.

“We are stronger when we are united.

“How can we unite our party? By going back to the principles and values that those same Dissident Eight and the founding fathers formed this party for.

“We must go back to these principles. Those are the principles that will unite us.

Secretary General of the FNM Serfent Rolle and chairman Carl Culmer were present to receive the nomination form.

Mr Culmer said he was pleased there had been many skillsets of the FNM offering for various roles.

“We are happy and we know the party has a lot of skill sets and we are happy to see that many of our persons have offered themselves for leadership and different roles in our party,” Mr Culmer said.

“Our party is a big party. I admonish all of the candidates that we are one big family and we want to make sure that at the end of the day we treat each other as family as we move forward.

“So, we want to keep this clean.

“We don’t want to give anything to those guys on the other side.

“So, let’s make sure that at the end of the day we have all the necessary things in place.”

Mr Culmer said on Friday at noon, the party was expected to further advise on the way forward.

“At noon we will have a meeting with you or your agent to inform you of what is expected going forward and give you all the necessary documents, the financial list of all members and delegates.

“Once again on behalf of the party we accept your nomination and we thank you for offering yourself as a candidate for the Free National Movement.”

Central Grand Bahama MP Iram Lewis and Marco City MP Michael Pintard have also announced their intentions to run for the leader position of the party.

Mr Lewis is scheduled to submit his form to the party today.

For his part Mr Moore maintained that he did not agree with the way the party had decided to go about choosing a leader. He said FNM Deputy Leader Peter Turnquest should have been made to carry out the administrative roles of the party until its full convention next year.

“There are three of them here from Grand Bahama and I prefer to have Thompson,” Mr Moore said when he was contacted for comment yesterday. “They are all good fellas, but I prefer him.

“I am not really interested in it and I am not coming up to Nassau for it either.

“Kwasi called me and I told him fine (I’ll support him).”

He added: “I support him because he’s been in a leadership role in Parliament longer than Michael and I think he’s more seasoned to deal with the leadership you know. So that’s why.

“You have a deputy so if something happens to the leader before the next convention of the party that’s why you have your deputy leader you know, but to go ahead and have a special election three months before a convention, I don’t think it was a wise thing to do.”

Mr Moore said he was of the view the men should have decided among themselves who would offer for the position.

Six of one half a dozen of the other. Truth be told the FNM Party has never attracted The best the Bahamas has to offer.

The visionary, the wise. the intelligent. The ability to build a country and to uplift the poor And in the words of Mr: Hanna to wipe away the tears from those who weep.

Politicians can only wipe away the tears if they were the ones who caused them in the first place, but they only produce more tears. But you are right Birdie and the same is true of the PLP, the source of all Political spin offs and break aways. Irrespective of the party in power, they all suffer the same folly, only to fast to point at the failings of the other, then rinse and repeat.

Let's see if I has this, right?
The old guard of Culmer, Carl Wilshire and Foulkes is ushering in D-Type miniature Minnisis-is; and anyone else lookin' and sounding like them has strings for Minnis to yank on.
Let's hope the new premier will authorize license plates can be bolted to a motor car of the victor but no government fleet motor car. ― Yes?