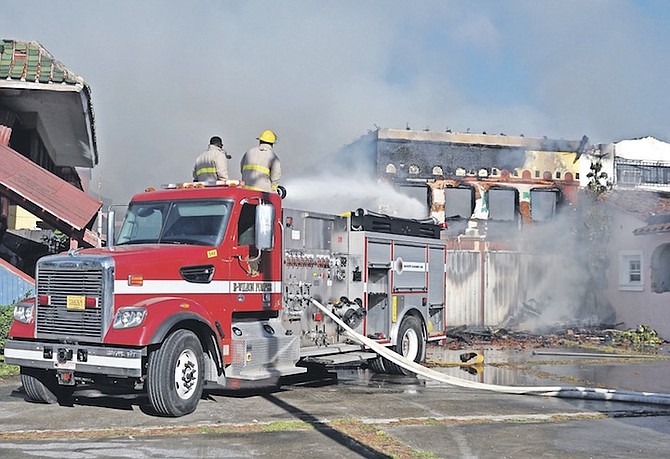 A dilapidated commercial building was gutted and destroyed following a massive fire at the International Bazaar early yesterday morning.

The blaze started around 6am, and took three to four hours for firefighters to contain and stop it from spreading to the other buildings.

When The Tribune arrived around 8am, several fire trucks were still on the scene battling an active fire. Flames and thick smoke were coming from the building. A portion of the building and the roof had collapsed.

Tyrone Thomas, fire safety specialist and agency advisor at Buckeye Bahamas Hub, said he received a call from the RBPF around 6.30am Sunday requesting assistance with a massive blaze at the Bazaar.

“When I arrived, we assessed the situation and looked at the best mode to extinguish the fire,” he said.

“As usual, we had a challenge with the water supply and pressure. So, we decided to relay water from one truck to the other to try boost the pressure to reach the blaze,” explained Mr Thomas, who is also a Police Reserve Sergeant with the RBPF.

Mr Thomas said they finally got the fire under control around 9am, after some three hours.

He said the major challenge was the lack of water supply.

“We have five responding fire trucks, but if you can’t get water to the trucks, you can’t extinguish the fire,” he said.

Mr Thomas stated there are some issues concerning firefighting in Grand Bahama.

“The challenge throughout GB and Freeport is the challenge with water pressure and the strategic location of fire hydrants,” he said.

He said they were not able to utilise two hydrants at the Bazaar as they were too far away.

“With such a large facility as the Bazaar, we should have hydrants strategically placed throughout the Bazaar area,” said Mr Thomas.

“I have made clarion calls for this in GB before. We need to drill fire-wells into the ocean so we can draft (suck up) water to the fire trucks. All our fire trucks have drafting capabilities.”

He said the ocean can provide adequate water supply and the pressure needed to help fight fires.

Mr Thomas said it should be made mandatory that large buildings or facilities, such as a mall or major complex, install fire wells on their property in the event of such fires to assist firemen.

“If we had water supply we could have extinguished the fire in five minutes. What happened this morning we took three-plus hours to get that fire under control. I have responded to so many fires with the Fire Department, but if you don’t have water to supply the trucks, we have this situation.

“I have been asking the authorities to build fire wells strategically throughout GB,” he said.

He also expressed concerns about the safety of vagrants who are known to occupy the run-down vacant buildings at the Bazaar.

After the Royal Oasis Resort closed in 2004 following Hurricanes Frances and Jeanne, many of the small shops and stores at the Bazaar closed their doors. The area has become an eyesore and there have been calls for it to be demolished.

Mr Russell said when he received a call about a fire at the Bazaar, he immediately went to the scene. When he arrived around 7am, the building was completely engulfed in flames, he said.

“The RBPF Fire Department was single-handedly trying to battle the fire. And shortly afterward, Buckeye came with larger trucks, and the Shipyard also. So, there was a collaboration of fire departments here to fight the fire.

Mr Russell indicated that he was made aware by firefighters that there is only one functioning fire truck at the RBPF.

“There is a serious concern as it relates to fire-fighting equipment. We were told that…one fire truck on this island is working. That is something we have to look into it,’’ he said. “Had it not been for the fire departments from those various companies we would have been in a whole lot of trouble.”

“Secondly, is the lack of proper fire hydrants that exist on this island. The Grand Bahama Port Authority has to take an immediate look at… getting hydrants up and running, and a proper maintenance programme to maintain the hydrants.”

“The firemen often complain of the lack of pressure with the hydrants and their inability to get enough water to the trucks to fight the fire.”

Senator Russell said he is certain the government will expedite its responsibility to the people of Grand Bahama and ensure that concerns are addressed.

“My major concern was whether or not persons were in the building who might have been in danger because we know persons who are homeless from time to time occupy the buildings there,” he said.

“There was nobody in the building,” Mr Lewis said.

He also expressed his support for suggestions made to help fight fires.

“Having a water source is one thing, but having the ability to get the requisite pressure to fight the fire is also necessary. What was suggested is critical. Having fire wells at critical areas and high-density areas where you have high occupancy is very important,” he said.

Last night, Ginger Moxey, Minister for Grand Bahama, said an investigation would be launched into the blaze and issues facing local fire services.

“On Sunday, 21st November, 2021, shortly after 6am, the Grand Bahama Fire Services received a call that the International Bazaar was engulfed in flames,” Ms Moxey said in a statement.

“Upon arrival to the Bazaar, firefighters encountered a massive blaze, and requested urgent assistance from two industrial companies on the island, the Grand Bahama Shipyard and Buckeye Bahamas Hub.

“I am advised that the Grand Bahama Shipyard and Buckeye responded immediately and dispatched fire trucks to the International Bazaar, bringing additional water to assist fire fighters in containing the blaze.

“As firefighters worked feverishly to contain the blaze, I prayed for their safety and I am thankful to the Grand Bahama Shipyard and Buckeye for their quick response and much needed assistance. This is public-private partnership at its best.

“Under the Christie Administration, a new fire station was built, and firetrucks purchased, to ensure that our firemen were equipped. My Ministry will immediately review all aspects of this catastrophe with the relevant authorities to formulate a plan that will bring a resolution to the recurring issues encountered by Grand Bahama Fire Services.”

Wells were scattered around Freeport with a stand pipe attached, (no pressurized, specifically for fire trucks to pump from.but so many of those rotted off at the water line underground. Lack of Maintenance. I've seen a few that just fell over, rusted out. The water table is sometimes as little as 3 ft below the ground surface. However pumping salt water will destroy whatever doesn't burn!

Should have let the eyesore burn to the ground!