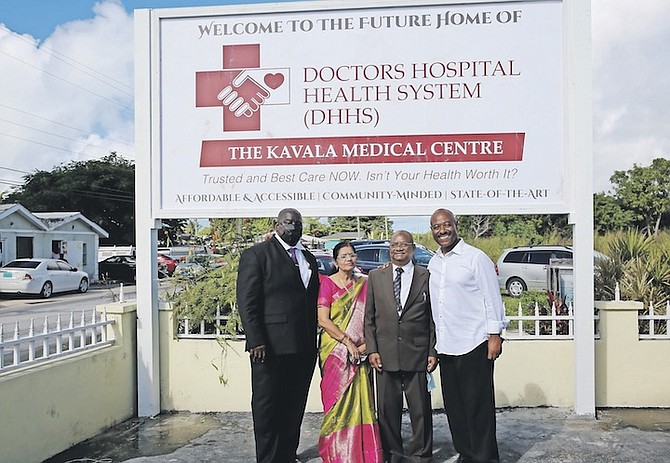 At the unveiling ceremony yesterday, Doctor’s Hospital chief financial officer Dennis Deveaux said they are pleased to be building on the legacy of Dr M R Kavala’s 40 years of general practice in the EMR community, and The Bahamas.

“We salute Dr Kavala and his wife,” Mr Deveaux said. “We thank you for entrusting this esteemed legacy with Doctor’s Hospital. We commit to you and your family that we will not fail your legacy.”

Social Services and Urban Renewal Minister Obie Wilchcombe, MP for West Grand Bahama and Bimini; and Senator Kirkland Russell were present and brought brief remarks. Dr Kavala and his wife, Nalini, and their daughters, Gita and Latha, and their families, were also present for the momentous occasion.

The Kavala Medical Centre is expected to open in February 2022.

Services will include traditional primary care and family medicine, full outpatient chemo-dialysis treatment, with five chairs to accommodate as many as 30 patients who require traditional outpatient services. There also will be a laboratory, pharmacy, and urgent care services. Additionally, DHHS will also look at establishing an infusion centre and the potential delivery of chemotherapy. They also intend to provide concierge transportation services at no charge.

Mr Deveaux said the acquisition of the general practice clinic in EMR is an important undertaking for Doctor’s Hospital.

“We believe that the first step prior to the establishment of a hospital in Freeport is to immerse ourselves in the local community and fill in gaps in the public health care system,” he said.

He explained that DHHS will execute a comprehensive four-core strategy. Firstly, to bring the very best of Doctor’s Hospital quality. Secondly, to ensure that health care is affordable and accessible. Thirdly, to deliver state-of-the-art primary care and outpatient dialysis services. And fourthly, to continue the legacy of Dr Kavala by providing care to his patients.

Mr Deveaux noted that its strategy for Grand Bahama began with providing COVID-19 testing in Freeport. “We intend to move part of that operation here – a strategy that will be preceded by the opening of a flagship facility on the Mall Drive, in Freeport,” he said.

Mr Wilchcombe said the unveiling of the centre is very significant for the people of West Grand Bahama.

“This is a big day for West Grand Bahama,” he said. “It is a very important day for us in the West who have from time to time complained of the lack of service or inadequate service, and for the fact that our journey is so long when we have to travel to Freeport,” he said. “So today you will appreciate my exuberance by the fact that I am so overjoyed by this relationship.”

He thanked Doctor’s Hospital for setting an example for the private sector to reach out to the west.

“A large population is in the west,” he said. “Often things have been concentrated only in Freeport and have to travel the distance. But we must cause for the transformation of this area by allowing the private sector to come in.”

The minister also commended Doctor’s Hospital for assembling an outstanding team of Bahamians.

Senator Kirkland Russell said the legacy of a valuable community service established by Dr Kavala in EMR 25 years ago will live on through the acquisition of his clinic by Doctor’s Hospital.

“Dr Kavala, we sincerely thank you and your family for the many years of service to the people of the Bahamas, especially those of your beloved EMR,” he said.

In 1982, Dr Kavala was recruited as a general practitioner in a government clinic in Andros. He moved to Grand Bahama in 1984, stationed at Eight Mile Rock. After completing his stint with the government, he opened his private medical practice in the Hanna Hill community, where he served almost 40 years. For the first 15 years, he was the only physician in EMR. Dr Kaval and his family have also hosted annual luncheons for senior citizens in Grand Bahama.

An emotional Dr Kavala, 75, thanked Doctor’s Hospital for taking over the general practice facility and for the decision to name it after him. “My family considers this the honour of a lifetime,” he said. “I am confident that the community of EMR and West Grand Bahama will be well served for decades to come.”