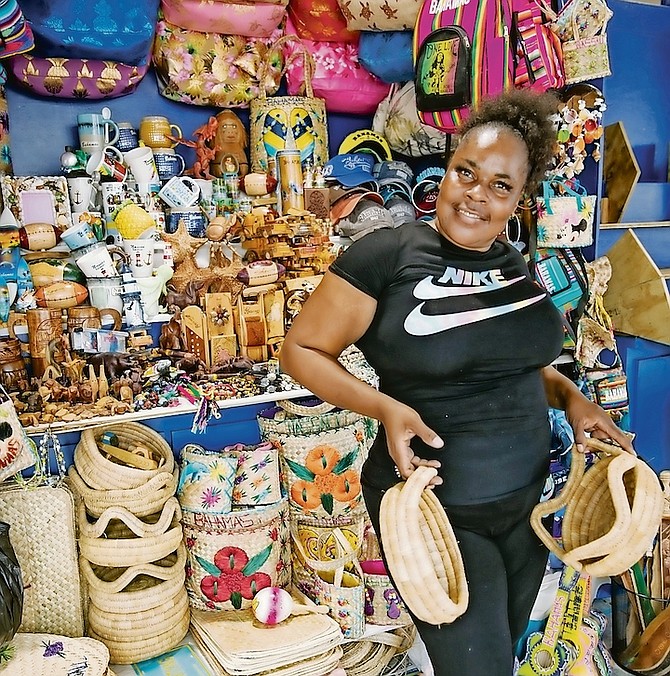 A VENDOR at the Straw Market yesterday, which reopened after 22 months of closure due to the COVID-19 pandemiuc. Photo: Racardo Thomas/Tribune Staff

AFTER nearly two years of closure due to the COVID-19 pandemic, Nassau Straw Market was officially reopened yesterday in a move hailed by vendors as “long overdue”.

Public Works and Utilities Minister Alfred Sears highlighted the move as part of the Davis administration’s efforts to further re-open the Bahamian economy and get more people back to work.

Mr Sears said for far too long, straw vendors have suffered, adding that with the market’s return, workers will now be able to have their lives returned to some normalcy and meet their financial needs.

During a press conference to mark the opening, he said: “For 22 months, these entrepreneurs have been closed and therefore, it was a matter of priority that we open the markets of our country because the money that they make, those profits are not repatriated to another country. That money is spent right here educating their children and spending it on their mortgages, spending it supporting their families and so on…and this is the measure on the re-opening of the economy.”

“…We want to make the markets the centre of our tourism product in our country. Yes, the hotels, the wonderful cruise ships and the amenities but we want the markets of our country to be the platform to display and to sell the creative products of the Bahamian creative imagination and these people for generation and generation have kept this tradition going and the government will make and continue to invest in our markets so that they are the centre, not the periphery, not on the side, but at the very centre of the attractions that are offered to our visitors in this country.”

The downtown site was among the final categories of businesses to reopen since being ordered closed last March.

Former Works Minister Desmond Bannister, who had responsibility for the straw market, attributed low vaccination numbers among vendors as one of the reasons for the market’s continued closure.

Although Mr Sears was unable to say how many workers have been inoculated against the virus to date, he insisted the numbers were “significant”.

Meanwhile, speaking generally about the market’s safety protocols, Mr Sears told reporters it was expected some 180 vendors will work daily on a rotation basis in keeping with social distancing guidelines.

Vendors also will be required to undergo weekly COVID-19 testing among other things.

He told reporters: “We need to make sure that all of our markets provide everybody who comes in with the assurance and we have a programme of encouraging vaccination and also there will be weekly antigen testing.

However, the protocols are fluid and subject to change following consultation with health officials and relevant stakeholders.

Asked how the government planned to address money owed by vendors for rent, Mr Sears said: “There has been a moratorium because the government recognises that if your business is closed and you have to have this is what we call not just a grace period but a moratorium on the payment and there would obviously be extraordinary situations where a myriad of personal challenges, you would have a case by case examination where there are exceptional challenges. The purpose is to get everyone mobilised so they can get back to work running their business”.

Yesterday, Straw Vendors Advancement Association president Celestine Eneas thanked the government for keeping their commitment to vendors and putting them as a top “priority”.

“I am proud to work along with the minister and his team because they put us as priority. They didn’t leave us out in the cold where they pushed things down our throats... and I am pleased to say after all this time, we could come to a place where we call home,” she said.

“We sent our children off to college. We sent them to private school and we don’t want to be no burden on the government so that is why we work so we can do for ourselves and so it’s a pleasure and privilege that we come this far by faith and looking forward to more bigger and better things.”

Another vendor, Lisa Rolle, echoed similar sentiments saying she felt great to be back to work.

However, Ms Rolle said she only had one issue of concern. She said there was only one main entrance for tourists to enter, despite there being several entry ways for the market.

She believes more than one door should be opened for access to allow better flow of tourists.

According to Ms Eneas, more than 300 vendors have stalls at the downtown site.

However, she said, some of those workers have no plans to return to the market, while some 30 have died since the pandemic.

I predict a headline in 5 years, "Market rents 5 years and more past due."

Resurgence of Bay Street roaches, rats and Chinese knock off Gucci. The only genuine straw in the place is the ones in their sodas and juice.

Excellent news. Now the tourists will be able to buy mostly imported stuff from mostly non-bahamian sale vendors. Do the Bahamian stall owners even go to the market to see what their Jamaican and Haitian staff are doing?