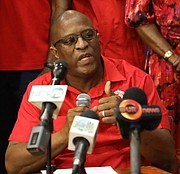 MARCO City MP Michael Pintard said he is concerned by reports that employees of Urban Renewal have been verbally abused and intimidated at the Ministry of Social Services and Urban Renewal.

“Over the past several weeks, I have been bombarded by deeply concerning stories of scores of Urban Renewal employees who have alleged that they have been subjected to acts of verbal abuse and intimidation,” he said in a statement.

“Our team is currently in the process of fully investigating the reports raised by the staff at Urban Renewal, which include expulsion from offices, changed locks, and discontinuation of services to the public.

“Subsequent to my inquiry into the aforementioned grievances, I was afforded the opportunity to meet with the substantive Minister of Social Services and Urban Development, the Hon Obie Wilchcombe, who shared his commitment and early actions to ensure that these concerns are addressed urgently. The minister has guaranteed that proper processes will be carried out as it regards to any staffing adjustments or review of employment contracts.”

Mr Pintard said Mr Wilchcombe assured him that the ministry will reverse the decision to remove people from their work stations and/or place them on vacation leave.

In the lead-up to the Free National Movement’s leadership convention, Mr Pintard has spoken out strongly against the “bullying” culture within politics and acts of victimisation.

“I am pleased with the tenor of Minister Wilchombe’s commentary on this matter,” he said in his latest statement.

“He made it clear that he intends to guard against arbitrary acts against Government employees that are motivated by naked political considerations, that all too often result in disrespect of staff, disruption of the provision of public services to citizens, and the disenfranchisement of Bahamians who are diligently working to feed their families and help their communities.

“We will continue to monitor this situation as well as any others that may arise throughout the public service. We will remain very vigilant on matters such as these, with a view to working with officials across Government Ministries and Departments to ensure fairness and equity in the workplace.”

The FNM, meanwhile, released a code of conduct yesterday, the purpose of which is to “promote conditions that are conducive to free and fair elections and a climate of tolerance in which electioneering activity may take place without fear or coercion, intimidation or reprisals during the campaign and process for and associated with the election for the post of Leader of the Free National Movement (FNM).”

The code calls for a political environment that is free of violence, coercion and intimidation and for conditions that are “conducive to free, fair and democratic elections conducted through a secret ballot in a climate of democratic tolerance in which political activity may take place without fear of intimidation or reprisals.”

According to the code, delegates must be able to “choose and vote for a candidate freely, without interference, fear, undue influence or bribery that candidates as well as their surrogates, and their supporters accept others have the right to present their political principles and ideas in a peaceful environment without intimidation or fear of reprisal, and must respect that right.”

The event comes as the Free National Movement prepares to host its one-day leadership race on Saturday.

Speaking at yesterday’s service, Mr Pintard said: “Tonight, I am here to worship because the truth is if any of us on the 27th and those that will run February, if we are going to be useful to our country, our lives have to be better than it is.”

“We need a personal walk with God and for me, I know that at my last moment, no matter what anyone thinks of me and they think of you, it is our relationship with God that will matter where we spend eternity and for me, no matter how many times I’ve struggled. I’ve always had an abiding faith and desire to be a better human being.

“It’s the only way that we are going to be the vessels, be the true vessels in which God can manifest His desire in this realm and that’s what I want to be a better father, to be a be a better husband and to be a better leader and I’m happy that we’re all here tonight so that we can minister to each other and hear the word of God and be responsive to what He has to say and do in and throughout our lives.”

There's talk that Saturday may not go as smoothly, should Rebel delegates, begin to Break-Free from the scripted program? Free at last! My soul is dancing!” - Sir Cecil Wallace-Whitfield.
Amongst the 500 selectively picked delegates will assembly on Saturday at the red party's one-day leadership convention is brewing the doubters as to if the party should even be deciding on a permanent leader at all, so why not just decide on a temporary leader until a full and properly constituted convention can be held a later date.
Why the rush go with the blemished and not postpone to go in search of fresh face, since all three contenders have cupboards with the doors hinges bursting to open to spill out all the negatives collected from their not being Free of taint from their close ties to their much beloved Mr. Minnis's and everything else like this and that, ― Yes?

Mr. Pintard can perhaps explain how he sat by and tried to lease the PI point off at a joonser price.

*that are motivated by naked political considerations, that all too often result in disrespect of staff, disruption of the provision of public services to citizens, and the disenfranchisement of Bahamians who are diligently working to feed their families

What a bunch of foolishness....isn't he the same politician that did not entertain all involved in the fishing industry and enacted a law that is discriminatory against Bahamian women. He surely did not consider those families and how they would feed their families when he put the breadwinners out of work. When the women asked for his assistance he dismissed them...