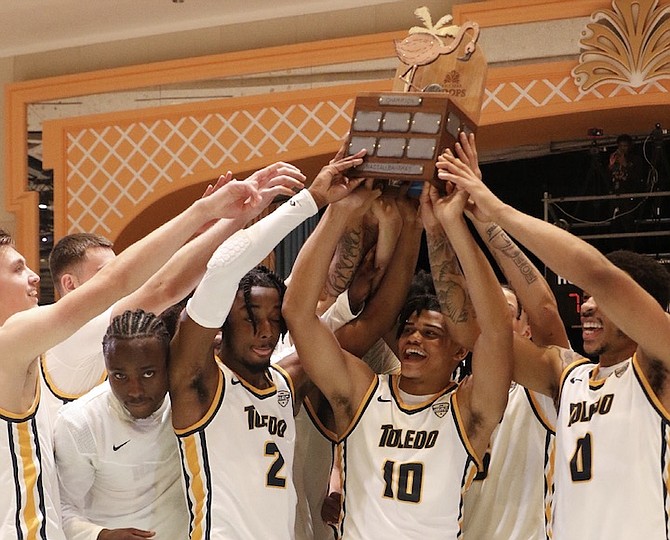 The Toledo Rockets erased an early deficit and completed their run to the Nassau Championship with a 79-70 win over the Chanticleers at the Baha Mar Convention Center last night.

Toledo improved to 4-1 on the season while Coastal Carolina fell to 3-2. Ryan Rollins was named tournament MVP after he scored 35 points in the finale.

The Chanticleers opened the game on a 7-0 run and opened a 17-9 lead midway through the first half.

The lead grew to as much as 14 before the Rockets erased the deficit with a late half run of their own. Rollins’ three pointer tied it at 34 with 31 seconds left and the teams headed to the half even.

Tied again at 63 with under five minutes left to play in the second half, Rollins split a pair at the line and followed with a layup and a jumper for his own personal 6-0 to put the game away for the Rockets.

Rockets head coach Tod Kowalczyk said the game was a testament to his team’s resilience. “Not many teams could have started the way we did and end up winning by nine points,” he said. “It speaks volumes about our leadership and ability to execute after a rough start.”

With Coastal Carolina’s 64-61 win in the semifinal round it gave Ellis his 800th career win as an NCAA Division I coach, becoming just the 13th coach in NCAA history to have 800 career wins.

In game one, Toledo defeated Charlotte 98-86. They advanced to the final with a 68-67 win over Tulane.

Harvey, a 6’6”, 210- pound wing player, joined the Chanticleers after completing his high school career with the StGeorge’s Jaguars in Grand Bahama and the Aspire Basketball Academy Wizards in Louisville, Kentucky.

The event now shifts to its other tournaments, the Bahamas and Pink Flamingo championships.

Six of the seven participating teams have played in last season’s NCAA Tournament. Other teams include Maryland, North Carolina State, Indiana, Washington State, Miami and South Florida. All seven games of the Pink Flamingo Championship will be broadcast on FloHoops.