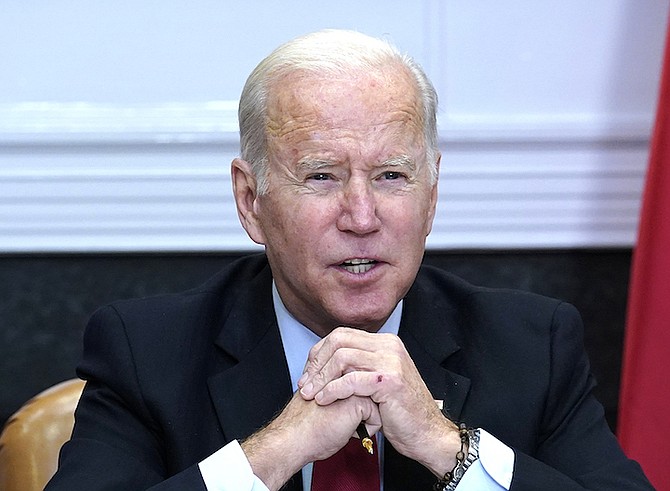 SINCE President Joe Biden pulled the plug on US active military involvement in Afghanistan three months ago, the country has been spared announcements of the latest casualties in overseas wars. But being not engaged in any wars doesn’t mean the US is quietly sitting by and watching world affairs from a passive position.

There is still a lengthy list of foreign leaders that successive American administrations have criticised, sanctioned and even sometimes actively sought to remove from power. Some members of this rogues’ gallery are quite familiar, with North Korea’s President Kim Jong-un probably topping the list. Now celebrating ten years at the helm of the world’s most problematic country, this man has vexed the Americans more than any other, alternating between sometimes conciliatory dialogue and summitry with Donald Trump on one hand and the ultimate bellicosity of continuing to develop and test nuclear weapons capable of reaching the American mainland across the wide Pacific Ocean on the other.

Other foreign leaders unlikely to receive Christmas cards from Biden this year include Presidents Daniel Ortega of Nicaragua (in office since 2007), Nicolas Maduro of Venezuela (2013), Miguel Diaz-Canel of Cuba (2018), Bashar Hafez al-Assad of Syria (2000), and Alexander Lukashenko of Belarus (1994). This list is hardly comprehensive. US criticism of foreign leaders knows few boundaries.

Each of these foreign Presidents has, however, to Washington’s frustration, retained power despite American disapproval and in many cases, active efforts to get them replaced with favoured alternatives. This is not to imply American powerlessness.

The US, for various reasons, simply has not believed the costs of ensuring their removal would equal the benefits.

But there is another side to this geopolitical coin. What about foreign Presidents whose tenure the US very much wishes to sustain, perhaps even at the cost of seriously escalating conflict with its principal global antagonists?

Two such presidents are edging back into the news these days, and their cases are similarly significant.

They are Tsai Ing-Wen of Taiwan (President since 2016) and Volodymyr Zelenskyy of Ukraine (2019). Both Presidents are squarely in the gunsights of their giant neighbours China and Russia, respectively, and are dependent in many ways on the US and its allies for their security and independence.

While the American foreign policy establishment has declined to decisively intervene in many overseas nations, including those mentioned above, maintaining the present governments in Taiwan and Ukraine may be seen as much more necessary, despite the potential for calamitous conflict.

The American view of Taiwan is governed by a concept accurately labelled “strategic ambiguity”. Under this clever artifice, the US has been able to maintain a de facto embassy in Taiwan while continuing to pursue normal diplomatic relations with China.

Almost 60 other nations, including Britain, follow a similar procedure.

Such tap dancing is necessitated by Chinese insistence that the island of Taiwan is properly part of China and should not be treated as independent by other nations.

They include Guatemala, Honduras, Nicaragua, Belize, Haiti, Paraguay and St. Lucia. The Bahamas terminated its diplomatic relationship with Taiwan and established formal ties with Beijing in May 1997, just ahead of China’s takeover of Hong Kong, home to the company that constructed Freeport’s large container port.

Taiwan, meantime, has continued to develop economically and politically. Its factories produce an estimated 60 percent of the world’s semi-conductors, the vital materials in technology for smart phones, cars and computers.

It’s no secret that China has been rattling its sabre in a lot of places recently, but nowhere has this been as apparent as in and around the Taiwan Strait which separates the island of Taiwan from mainland China. The Chinese navy and air force has pushed into Taiwanese waters and air space in uncomfortably aggressive fashion recently, and Taiwan’s leadership has complained vociferously about Chinese disinformation and political destabilization efforts. (Most Taiwanese and mainland Chinese speak the same Mandarin Chinese language).

Biden has been asked about this several times by reporters. “Taiwan is independent. It makes its own decisions,” he declared earlier this month. This does not contravene existing American policy that essentially endorses the current political status quo, the White House press office quickly clarified. But in October, Biden was asked if the US would defend Taiwan against a military attack by China. “Yes, we have a commitment to do that,” he replied.

America doesn’t actually have a formal treaty commitment to defend Taiwan militarily. But for most of the time since the island broke away from China during the post-war chaos of 1949, commitment to Taiwan’s independence has been almost as much a staple of American political foreign policy as support for Israel’s existence. Presidents Eisenhower and Nixon both actively courted Taiwanese influential figures, and ties have remained strong since then.

Commitment to Taiwan was a specific conservative American litmus test until the 1970s when most of the world recognized China diplomatically.

Further Chinese aggression can hardly be ruled out in an era where Beijing is flexing its economic and military muscle in many overseas places. The US may face some really tough choices over Taiwan. What if increasingly assertive Chinese President Xi decides the current internal American political and social divisions have diverted it sufficiently to afford Beijing the opportunity to move in and overwhelm Taiwan? Would the US really go to war over the island?

Another nation facing constant threat from a larger, linguistically and culturally similar neighbour is Ukraine.

Its long eastern frontier with Russia has been bristling with troops and heavy armaments for years, especially since the Russian annexation of Crimea from Ukraine in 2014.

(Most Crimeans speak Russian. Soviet Premier Nikita Khrushchev ceded the peninsula to subservient Ukraine, then a Soviet province ruled from Moscow, in 1954 for internal political reasons that are still somewhat murky).

The US and its NATO allies don’t have a treaty-based commitment to defend Ukraine against a potential Russian military invasion, but Western economic sanctions on Russia after the Crimean annexation have pinched Moscow hard economically, and Russian president Putin has made no secret of his aspiration to return Russia to its Soviet-era great power status.

Grabbing Crimea, menacing and even briefly invading neighbours like Georgia and engaging in active hostilities with Ukraine are all tactics in this grand, domestically popular Putin plan. In recent days, it has been reported that over 100,000 Russian troops have been massed along the Russia-Ukraine border. Russian and Ukrainian forces exchange artillery and small arms fire over a disputed border region almost daily.

Blinken told reporters that American commitment to the territorial integrity of Ukraine is “ironclad,” even though Ukraine is not a member of the NATO alliance.

This sounds a lot like the “strategic ambiguity” that governs American and Western policy toward Taiwan and China.

The US doesn’t want bullies China and Russia crossing the line to annex Taiwan or parts of Eastern Ukraine, but it must walk the narrow line of achieving effective deterrence without becoming engaged in a shooting conflict that could possibly wind up sparking World War Three.

In many ways, it’s preferable for Washington to eschew military efforts to overthrow unfriendly rulers in nations around the world where confrontation with Russia or China would less likely be seen as an existential threat to those countries. The calculus in such cases is arguably less complex.

But China’s view of Taiwan and Russia’s view of Ukraine both centre on an expansionist strategy that foresees military, political and economic influence spreading as a key tenet of those powerful nations’ foreign policy. Both Putin and Xi have made clear their vision and ambitions to expand their nation’s influence.

It’s a good thing the Americans are paying close attention.

Missteps and miscalculations in such sensitive areas carry with them the potential for peace-shattering conflicts that would disrupt and potentially gravely damage the entire world.

Wishing a peaceful Thanksgiving to all!

Incompetent, feeble and weak; Joe Biden is unlikely to do anything that disrupts his corrupt family business ties to China. With Joe Biden as President, the United States is an impotent and bumbling failure.

It is high time for the Tribune to remove the biased Socialist Democrat bootlicker Charlie Harper from his propaganda position in the Bahamian media.