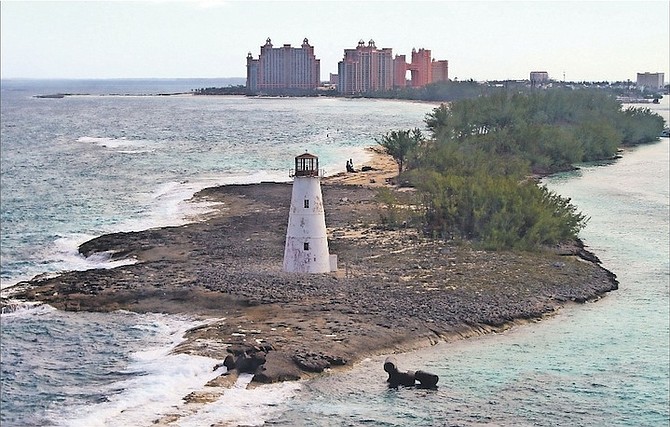 A recent view from a cruise ship of the Nassau lighthouse, which is showing clear signs of decline and disrepair. Photo: Ronald G Lightbourn

• Bahamian entrepreneur says he has ‘more cards to play’

Royal Caribbean Cruise Lines secured a second lease from the Minnis administration allowing it to rent three acres of seabed off Paradise Island for just $3,000 per annum, it can be revealed.

Documents obtained by Tribune Business reveal that the cruise giant obtained a similar deal to its seven-acre Crown Land lease, with terms including an original 25-year lease; an initial 25-year renewal and “no less than four additional options” for further renewals - each up to 25 years.

And the rental income due to the Government is just one-twentieth, or 5 percent, of the rate Royal Caribbean is paying to lease its seven acres of Crown Land. For the latter, the cruise line is paying $140,000 per annum VAT-exclusive for a rate of $20,000 per acre. Yet the seabed rental rate is the equivalent of $1,000 per acre per annum.

The lease document, dated May 25, 2021, the same day that Royal Caribbean’s Crown Land lease was executed, confirm that it includes “approximately three acres” covering several sites in both Nassau Harbour and on Paradise Island’s northern coast according to maps provided by Bahamas-based Target Surveying & Engineering,

It stipulates that the cruise line must pay “an annual rent of $3,000, calculated at the rate of $1,000 per acre of the seabed”, plus VAT that is payable on June 1 annually for 25 years.

The seabed lease is key to facilitating infrastructure vital to making the proposed Royal Beach Club work, particularly the docks and jetties needed to transport thousands of passengers back and forth between Nassau Cruise Port and Paradise Island. The $110m project’s capacity is to be capped at 3,500 guests at any one time.

And, mirroring the Crown Land lease, the cruise giant has effectively been given a similar 150-year lease via the original 25-year term, the first 25-year renewal and the four options to renew - all for 25 years - thereafter.

The lease is signed and executed by former prime minister, Dr Hubert Minnis, in his then-capacity as the minister responsible for Crown Lands, and witnessed by his senior policy adviser, Joshua Sears. It was recorded in the registry of records on June 15, 2021, with Michael Bayley, Royal Caribbean’s president and chief executive, signing to bind the cruise line.

The latest revelations are likely to spark further controversy surrounding government transparency when it comes to use of Crown Land, which is supposed to be held in trust by the Government for the Bahamian people. Neither the Crown Land lease nor its seabed equivalent have been publicly disclosed before, and they have not been tabled in the House of Assembly.

The seabed lease also emerged on the same day that the Prime Minister’s press secretary effectively said the Davis administration will not agree to the 150-year term on the seven Crown Land acres, effectively implying that it will seek to renegotiate terms with Royal Caribbean.

Acknowledging that the cruise line already owns some 13 acres on Paradise Island’s western end that it has acquired privately, Clint Watson said of the Crown Land: “We’re not going to do any ad hoc, crazy deals.

“We would have seen the stories in your paper about these leases that go on for years and so forth. That’s not what’s going to be what the outcome is for the Bahamian people, for this administration. There is no wrap up of a deal yet, there’s no concretising of a deal yet for both sides.”

Mr Watson added that the Prime Minister was determined to find a compromise between Royal Caribbean and Toby Smith, the Bahamian entrepreneur behind the neighbouring $2m Paradise Island Lighthouse & Beach Club project, who is asserting his claim to three of the seven Crown Land acres subject to the cruise giant’s lease.

Mr Smith initiated legal action against the Minnis administration in the Supreme Court, seeking a declaration that the Crown Land lease he signed in early January 2020 - some 16 months before Royal Caribbean’s document was executed - for that three-acre parcel, as well as two other acres, is valid and legally binding.

That action remains live, but Mr Watson indicated that Philip Davis QC was seeking a solution where all legal battles would come to an end. “The previous government, as you would have known, granted two people a lease for the same land, Toby Smith, as you mentioned, and, of course, Royal Caribbean. We know you can’t grant two different people the same plot of land,” he said.

Pledging that the Prime Minister will honour his stance that “Bahamians always come first”, Mr Watson added: “What we’re trying to do though, because of the nature of the situation, is find an amicable agreement for both parties; for all to be satisfied in this and, most importantly, not just for both sides, but for the Bahamian people.

Mr Smith last night told Tribune Business he was elated that the Government seemed determined to “afford me a seat at the table”, which he contrasted with being almost totally ignored under the former administration.

He added that Royal Caribbean seemingly felt it had the Royal Beach Club, and the disputed three-acre Crown Land parcel, “in the bag” and had now been disabused of that notion by the Prime Minister’s press secretary.

“I continue to feel encouraged by this new day government, and the fact that the Government has called into question a lease extended to Royal Caribbean for a 150-year term for the Crown Land,” Mr Smith said, adding that his lease terms and rates - which he did not divulge - were much less favourable.

“I feel as though Royal Caribbean thought they had this in the bag, and were continuing down that path. I wish to particularly thank the Prime Minister and his press secretary for qualifying that is absolutely not the case.”

Demanding that Royal Caribbean “cease and desist from running roughshod” over the disputed three-acre Crown Land parcel, especially since it is embroiled in a legal dispute, Mr Smith added: “In my humble opinion, they [Royal Caribbean] should stick with the private land they have purchased and the remaining Crown Land used solely for the benefit of Bahamians.”

He said was proposing to change Colonial Beach’s name to Lighthouse Beach, so as to break with The Bahamas’ colonial past, and continued: “I am confident in the new administration where I will be afforded a seat at the table to discuss the matter, whereas throughout the Minnis administration’s entire occupation of the Prime Minister’s Office I was not afforded that opportunity.”

Describing his court case as “one of my aces”, Mr Smith told Tribune Business: “One of my aces is the court, but a smart poker player doesn’t show all his cards. There’s more to follow where that came from. Royal Caribbean shunned me back in June, and there they can remain until they grow a level of respect for Bahamians.”

Going back to the seabed lease, many observers will view the rental rate as a giveaway by the former administration at a time when the Public Treasury needs every cent it can get. However, one source familiar with seabed leases, speaking on condition of anonymity, said the situation has to be placed in context. “What does it mean,” they asked of the rate.

The Government has traditionally leased seabed to developers at low, almost peppercorn, rates. A case in point is Arawak Port Development Company (APD), the BISX-listed Nassau Container Port’s owner/operator, which when created in 2011 was granted a 45-year lease over 27.88 seabed acres for an annual licence fee of just $1.

“They’re not doing anything different from what the policy is,” the source said of the Government. “At some point it just needs to be revisited.” They were more concerned by marina-based developments “monetising” seabed leases by selling dock space at $20,000 per foot on leases paying similar rates to Royal Caribbean.

“It’s just too one-sided, but the developer will say they are spending so much money and creating jobs. But at the same time they are paying no VAT, and it’s duty-free. It’s a model that doesn’t make any sense.”

The source pointed out that the Royal Beach Club will generate additional taxes and economic impact for both the Government and wider Bahamas, with spending by the cruise passenger guests helping to generate local employment and demand for goods and services provided by Bahamian companies.

James Boink, Royal Caribbean’s vice-president of private destinations, told a virtual meeting held by the Department of Environmental Planning and Protection (DEPP) earlier this year that just one-third of its passengers will go to the Royal Beach Club, which is designed to drive additional visitors to this nation and get them off the ship to spend more money in the destination.

This will in theory leave two-thirds of Royal Caribbean’s passengers free to patronise local businesses, but those sectors that rely on the cruise industry - especially Bay Street and downtown Nassau - will likely be deeply sceptical about this.

"but the developer will say they are spending so much money and creating jobs. But at the same time they are paying no VAT, and it’s duty-free. It’s a model that doesn’t make any sense.”

ok so give us preference class shares then. When you make money we make money.

Do they realize that the people who come off the ship and go to junksnoo beach will now go to the beach club? It never ceases to amaze the broad smiles and handshakes we give to these people for gosseying us

While it is true that Junkanoo beach will loose some customers. Clarity is needed on weather Royal Caribbean will allow only exclusive access to their PI beach club for their passengers only OR will they also allow the other cruise lines such as Disney, Carnival, Virgin or MSC, Crystal passengers to have access. I think not, so junkanoo beach will still have good business .

Why are they still giving away The Bahamas? There are approximately 100 cruise ships under construction or proposed to be constructed over the next decade. Bigger and bigger ships. They need somewhere to sail and the world not The Bahamas is getting any bigger. Lcrus identity supposed be a luxury. So let them pay for it, taxes included.

Royal Caribbean Cruise Lines secured a second lease from the Minnis administration allowing it to rent three acres of seabed off Paradise Island for just $3,000 per annum and everything else like this and that it can now be revealed that Mr. Minnis's, three Jump Offs, Pintard, Thompson and Lewis spent even much less than the $3000 of The Colony's GNP on the popoulaces healthcare services.
Hopefully not all of the 400 eligible to vote convention delegates will not forget...Free at last! My soul is dancing!” - Sir Cecil Wallace-Whitfield.― Yes?

Yet another outrageous lease arrangement steeped in atrocious corruption instigated by senior officials of Royal Caribbean. This one too should immediately be declared void ab initio by the Davis led PLP administration.

The FNM "roc wit doc" has to be the dumbest man on God's green earth.

doc told those who voted for him "It is the peoples time" They believed him then he told them it is "Your Future" how very sad all of this has been.

With fuel prices increasing the cruise lines need close to the US destinations, Apparently no one in government was astute enough to see that the shut down gave the Bahamas an opportunity to assess real time revenue losses vs. projected/feared. The re-opening was a missed opportunity to re-negotiate port opening criteria and taxation, not bend over and dribble on their shoes.