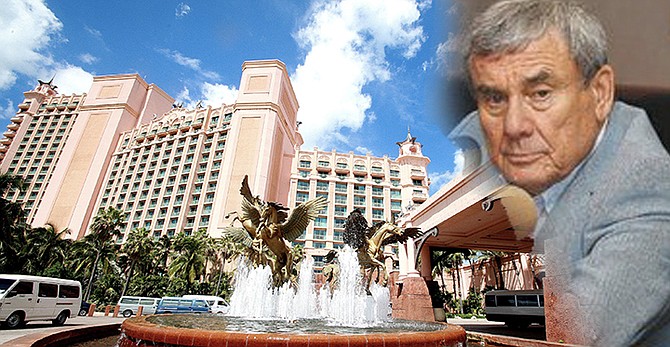 ATLANTIS and the man who made it a reality, Sol Kerzner.

SOMEONE I highly respect reminded me recently of the reaction Bahamians had when we heard a hotel magnate from South Africa, a man known to throw lavish parties aboard a private jet and enrich himself in a land of apartheid, had purchased much of Paradise Island. Bahamians were enraged, apoplectic. Fury fuelled banner headlines. How dare Solomon Kerzner think he could come into The Bahamas and pull his Sin City foolishness here! How dare the then-Ingraham government welcome this man who built an empire in a land putrid with injustice?

The year was 1994. Kerzner, a man short in stature and long in vision, saw what others had not. When he took over what was then the failing Resorts International, he inherited a property that showed every crack and spalling sign of its bankrupt condition. It had gone through several owners, including for a minute, Donald Trump who walked away disgusted before ever completing the purchase, and most recently entertainment mogul Merv Griffin, who sold Resorts International to Kerzner.

The buyer was an enigma, an accountant from South Africa who had a knack for creating inner sanctums of shameless pleasure where guests would forget the outside world, a jet set fusion of the Gary Player Golf Club, casinos and lavish entertainment. The world of Kerzner was populated with sheer exhilaration.

I did not know him well, but I remember walking with him and the late architect he chose to transform his new Paradise Island resort, Jackson Burnside. We got to the step-down lobby of the old Beach Tower hotel and Kerzner was appalled. “Why?” he asked, “Why is the wall there, why is there no view of the sea?” Burnside explained - because the original owners did not want guests to be distracted. They built a hotel on a beautiful white sand beach that stretches a full two miles in paradise and they wanted guests to stay inside – leaving their money in the casino. “Tear it out, take it down,” Kerzner ordered. And Burnside and team did. When the hotel re-opened, a wall of glass exposed the shimmering blue of the Bahamian sea and sky.

By the time Kerzner, then Sir Sol, died of cancer in 2020, he had forever changed the face of tourism in The Bahamas. The man known as the Sun King authored, stroke by stroke, the now internationally acclaimed resort Atlantis. He built the Royal Towers, the Cove, raised the standard of the Ocean Club to a One and Only brand. He built the largest water park in hotel history, the largest indoor and outdoor conference space in the Caribbean, a 30,000 square foot flagship spa.

Four years and nearly $1 billion after he ignored his lack of welcome by the people of The Bahamas, he had recreated the lost city of Atlantis and opened in a glamorous, glimmering ceremony that made a different kind of headline around the world. Accolades flowed along with water features, a shark tunnel, the world’s largest open air marine habitat, massive gold spires and thrones and a sense of wonder where at every turn, there was a photo opportunity.

On his death last year, those who may have been among the early critics fell all over themselves praising this man who at one time was the personification of the stranger they feared. “Kerzner was a giant in the hospitality industry, and we shall not see his likeness again. His vision for Atlantis reshaped our skyline here in Nassau,” said then Tourism Minister Dionisio D’Aguilar. “No history of the modern and independent Bahamas would be complete without reference to the positive and pervasive impact that Sol Kerzner made…” wrote the Prime Minister, Hubert Minnis.

The man whose presence was greeted with rage and distrust built what became the strongest pillar of the private sector Bahamian economy. According to its own published history, Atlantis has employed directly or indirectly more than 50,000 Bahamians. TV ads of Atlantis expose The Bahamas to the world. You may not be a fan of mass market resorts, but you cannot deny the impact Atlantis has had, its economic and social contributions to a modern Bahamas, its focus on training, its voice in an inclusive, diverse community.

Why the focus today on Atlantis? Because it is the prime example of how we fear the foreign before we accept it, imbue or enhance it with Bahamian nuances and make it our own. Every foreign entity that enters The Bahamas to do business is greeted with what I will call the Atlantis R&R, Resentment and Resistance. Was not Baha Mar just as defiled, the latest iteration of the devil from abroad and was it not the chosen site two months ago for the swearing-in of a new government?

If we accept the outsider in the end, if we know that foreign direct investment is as essential in this economy as the air we breathe, the real question is why do we resent it so much? Is it because we detest the fact that we are dependent?

Why do Bahamians think only Bahamians deserve a chance when Ancestry.com and 23andme show us we are a mixture of ancestries?

Every government, every economist, every mother and father and their mothers and fathers before them, have depended upon, at some level, the economic, scientific and technological benefits and cultural richness of people from outside this country. There is nothing that we do that is not in some way connected with something or someone from abroad. The keyboard I am typing on, the light that shines on that keyboard at four in the morning, the newsprint that this paper is printed on, even the coffee in my cup.

When will we stop fooling ourselves thinking that we can do it all? When will we have an epiphany and admit that The Bahamas for Bahamians and friends of The Bahamas is a better Bahamas?

From the music we listen to to the cars we drive our lives are intertwined with non- or partial Bahamian. Yet our resentment simmers under the surface as the poor resent the rich and the rich resent the richer. How many Bahamians have succeeded at hotels throughout the Family Islands or small hotels in New Providence owned or partially owned by non-Bahamians? How many Bahamians choose of their own free will to bank with a non-Bahamian bank when there are at least two fully owned and operated Bahamian banks to choose from?

Let us celebrate that which is Bahamian, the Cia Monets of the design world, the creators of Bahamian food, the Carters who keep Bahamian music alive, the Doongalik Studios of the Bahamian art and story-telling world, the Lenos of Bahamian investment, but let us also vow to overcome the stumbling block of xenophobia and come clean about the importance of friends, whatever they call home.

I don’t see any students turning down scholarships from the Lyford Cay Foundation or Canadian Lyford Cay Foundation because some of the donors are not Bahamian. Friendship is as friendship does. It is not heritage or headquarters or who your grammy is. It is action. And that is the basis on which foreign must be judged. Neither Bahamian nor foreign is 99 percent pure. It is our task to separate the good from the bad and be smart enough to know who to show the welcome mat to and who to show the door.