Journalist claims sister’s death was due to negligence 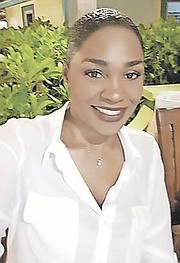 SHENIQUE Miller, host of Beyond The Headlines, has criticised the care her sister received at Princess Margaret Hospital, alleging “negligence” was to blame for Swanson Miller’s death.

In a post on her Facebook on Wednesday the host claimed that her sister is “no longer because of poor care, negligence and the lackluster manner in which health-care is administered at the Princess Margaret Hospital”.

This newspaper contacted the Public Hospitals Authority where an official said a statement was to come. However, no statement was released up to press time.

Contacted yesterday, the heartbroken host chronicled her sister’s deteriorating health, telling The Tribune of a phone call from Swanson alerting her to a health issue. It was the begging to a devastating end.

Her sister weighed her healthcare options and ultimately decided to seek treatment at PMH.

“Three weeks ago, after I got done with the show, I would normally call them or call my mother, her and two of my sisters, including the one who passed away, they lived together. So, I would call my mother just to say hi and get her feedback,” she recalled.

“My two sisters ended up speaking with me and she asked me - she said her blood count was very low and the doctor told her she has to go to the hospital for a transfusion. She asked me ‘What could I do? Should I go to PMH or should I go to Doctor’s?’ And I said to her, ‘Listen, I know that you were recently back to work and maybe you’re obviously trying to get back on your feet because she was furloughed for more than a year and a half from Atlantis’.

“She had recently returned to work, and so obviously as someone with a child in college and having depleted savings and all that. You know, you’re trying to hold on to every little cent now to rebuild and to ensure that you have something for your son. But I told her I said on an ordinary day, PMH, has challenges. Now given COVID, it’s a mess. My advice to you is if you can and if you have any funds that is put aside somewhere, anywhere go to Doctor’s. Meet your deductible, etc, but her focus was you know, Shenique, the deductible is just so much.”

Swanson went to PMH and was eventually admitted, according to Shenique, who told The Tribune that several blood transfusions were administered.

The media veteran explained that her sister was plagued by a “common female aliment” that she was trying to get addressed. It caused her blood count to also suffer.

After being hospitalised for a little over a week she was discharged and also given a date to be seen at one of the outpatient clinics.

“This is someone who, at the time, a number of tests were performed on her during that time and CAT and CT scans - just a number of various tests that they can see that the female issue needed to be addressed based on the size of everything,” Ms Miller explained. Later, she noted they wanted to giver her sister an injection.

Despite this, the host said another revelation concerning her sister’s health was revealed.

Shenique said this shortness of breath continued up to Sunday.

“She sat unattended. Not much as a cup of water to drink until Monday morning when she was administered drips because at the time she was again gasping for air – having difficulty breathing,” Ms Miller claimed.

However, a family friend who works at PMH reportedly went to the accident and emergency area to take her a cup of water and a cup of tea.

Shenique said of her sister’s condition: “Weak, no energy, and ‘very tired’ were some of the symptoms Swanson experienced.”

It is claimed that Swanson complained that a nurse rushed to have her discharged. It was then that Shenique said she reached out to a senior official for help.

“I sent him her number. As far as I know he called her. I don’t know if he ever followed up further than that in terms of speaking with doctors or staff in the area,” she said.

“When my sister went to pick her up… she was again sitting there breathless, tired - had to be taken out in a wheelchair. Had to be wheeled to my sister’s vehicle because she had no strength to walk.

“Getting out of the vehicle just to walk a short distance to the house, she had to stop, take breaths and and just very laborious.”

On Tuesday, the breathing issue continued.

The ambulance was called and Ms Miller’s father awakened her that something was not right with her sibling.

“Based on my mother’s response they walked back out and mummy said ‘Well what happened they’re not taking her. Why they ain’t telling her’. I said mummy they are gonna take her. They’ll take her and I don’t know if it was the emergency medical technicians or my sister and brother. But someone informed my mother and said, it in just these same words - she passed.”

The ordeal has left the family searching for answers.

The family awaits the results of an autopsy for better insight into what led to Swanson’s death. It is a blow the family never imagined, especially with the holiday season approaching.

Very sad story indeed. Unfortunately this is the way things operate in the Bahamas. It’s simply a part of our culture and it’s who we are as a people. Careless doctors, nurses and clinicians clearly failed to intervene and as a result this lady died. It happens all to often at PMH. Very sad.

Dr Darville, PLEASE look into starting a program to assess the adequacy of the medical knowledge of your staff. Alot of these guys just float through school and just give nonsense diagnoses. They give the competent ones a bad name

Ill go out on a limb that she had COVID. All the signs are there. These tests arent 100% accurate, but breathless zero energy and cant even walk. Didnt that alert any physician????

... a sad story, but every story has two sides and we are only getting one with a lot of gaps. If she is convinced there was negligence then take legal action, but these matters should not be tried in the court of public opinion, because you are allowing people who have even less facts than you do to jump to conclusions. Not helpful for anyone!

the story is very disjointed. But what stands out is breathlessness, gasping for air, extreme fatigue, inability to walk short distances. Im willing to be totally wrong on COVID, but it doesnt sound like they did much to monitor her just in case, given evidence of the common markers for severe COVID...She's been treated for this issue before, did these symptoms accompany those other episodes or were they extraordinary? We dont seem to do a good job of asking "why"

Stay away from the hospital, no one cares.

PMH is a governmental agency. What happens in agenvies? They steal all the people's money, show up to work at 9:30 am, leave for lunch at 1pm and do not return because they have to pick up their cbildren, don't work on Friday, sit at work all day and do nothing, hide behind unions, want raises, play each political party every 4 years, did I miss anything? Oh, they are very short and rude with patients and family members, and are really not interested in their profession....it is evident on their faces. So , I keep hearing around town, don't know if any of this is true, though.

The sad thing about PMH is they do have some great doctors. I think the problem may a high percentage of ill trained and ill informed practitioners. And the doctors know, they know who to tell their family members "not" to go to. dont let so and so perform any back surgery in you, dont send your wife or daughter to so and so for a gyne exam .. The PHA needs to find some objective way of getting this info, removing these threats to Bahamian society and then nullify them by infusing them with knowledge

So much lack of information! Scant info in the article, a sense that those involved in the family had no idea and no proper medical explanation from medical personnel, and that even the medical personnel had challenges understanding the best course of action! “Blood count low….transfusion”. Was it red blood cell anemia? Underlying B12 anemia? A problem with red cell or hemoglobin capacity? What symptoms took her to get the blood test in the first place? She was “furloughed from Atlantis (and was) back to work”. So she worked at Atlantis and would have been vaccinated. “ … a number of various tests that they can see that the female issue needed to be addressed based on the size of everything”. Yet she was already weak, breathless, no energy, and really tired, so which Dr considers surgery before a patient has recovered somewhat from having blood transfusions? !! “…they wanted to giver her sister an injection.” An injection of what? For what? “I said rule out COVID. But it wasn’t.” So they did a test to know that it wasn’t? How many tests so that a false negative could be ruled out. Did they do a contact history to ensure she hadn’t recently travelled and become infected with Covid, or a variant? Will they even do an unbiased autopsy with transparency concerning the results? If it was vaccine related would we even be informed? If her sisters tragic death was due to iatrogenic causes would the Hospital even acknowledge that? This lady’s death is indeed tragic! Tragic for all her family and friends, but also a tragic indicator of how ignorance abounds, how questions are therefore not asked, nor answered, and how a system is grossly failing the people it is supposed to serve! It behooves us to become informed, to learn, to ask the questions, to search and dig for answers and to not remain complacent any more. Why should we trust something that is obviously so broken?

Im just happy to know nobody ever died from these symptoms ever in history before Covid.

Will we ever get the truth on this?

This is poor journalism in more ways than one.

vax status? guessing she declined to get protected and the medical professionals decided to triage available space for those who needed it and were not silly or selfish. the writer clearly omitted any ref to vax status. any life lost is too much.