No ‘far-off dream’: On target for 1m tourists 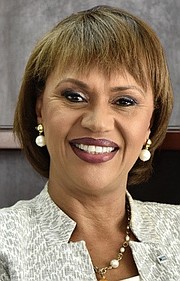 • Director-general: ‘Quality of numbers’ is key

The Bahamas is on target to realise its “far-off dream” of one million stopover visitors in 2021, a top official disclosed yesterday, while hotel rates and tourist spending up on pre-COVID levels.

Joy Jibrilu, the Ministry of Tourism’s director-general, told the weekly media briefing by the Prime Minister’s Office that “the quality of the numbers” that The Bahamas is enjoying in its pandemic recovery is more important than just mere visitor arrivals.

Confirming that The Bahamas is on track to hit the one million stopover visitor target set by former tourism minister, Dionisio D’Aguilar, when he spoke to Tribune Business in early July, she said: “Internally, we’re floating a number. When we floated that number in September, that seemed like a far-off dream.

“We said: ‘Wow, what if we reached one million stopover visitors in 2021?’ Unbelievable, no one would have imagined it, but that dream is a possibility, so that would be great. That would be a great testament for all the hard work that has been done in this destination. But it’s more than that at this stage.”

Mrs Jibrilu said hotel and tourism industry margins, and yields, had increased instead of dropping as had initially been predicted. And increased tourism spending meant that the economic impact from The Bahamas’ largest sector is being felt more widely, and by more persons.

“We’ve realised that during our recovery it’s not necessarily about the quantity of numbers; it’s about the quality of numbers,” she said. “What we have seen that has been tremendous is that our hotel occupancy rates, while they are good, what we call ADR - average daily room rate - for those hotel properties, they’ve not dropped; they’ve increased.

“Visitor spending has increased. What we’re hoping to see is a real uptick in economic impact in the destination. So I think that is going to be very interesting to see at the end of the year. Yes, we made our goal of one million [stopover visitors] but, more than that, the spending we saw in 2021 was equal to that of a great year. That’s what this year is unveiling for us.”

Mr D’Aguilar, before being voted out of office on September 16, told this newspaper: “I always figured we’d get one million stopover visitors [this year]. That’s kind of my target. At the end of June we had 400,000-plus, 425,000, so I’m hoping for the second half of the year.” His prediction thus appears about to come true.

Mrs Jibrilu confirmed Tribune Business disclosures earlier this week about the strong Thanksgiving holiday period being experienced by many resorts, saying: “They’re seeing occupancies in the hotels of 90 percent and beyond, so the numbers are above that which we saw in 2019, which was a banner year for us.”

This, she added, was being experienced by New Providence-based hotels as well as those in the Family Islands. “This confirms the position that The Bahamas is ahead in its recovery when you look at where the world is globally,” the tourism director-general said, noting that the recovery had started in the summer despite the country’s ‘Level 4’ “don’t travel” status with US health authorities.

Mrs Jibrilu said The Bahamas’ upgrade to ‘Level 3’ by the Centres for Disease Control and Prevention (CDC) meant major resorts could not enjoy “the cream of the business” returning without any COVID-related regulatory impediments.

“It did have an impact on the business of tourism in its totality,” she explained of the ‘Level 4’ ranking. “What do I mean by that? If you look at the major resort properties, Atlantis and Baha Mar, a lot of their business is predicated on group business.

“They have large conference facilities, meeting rooms, meeting spaces. That’s really where a great deal of their business comes from. I want to say that’s the cream of the business for them. At a ‘Level 4’ ranking, many, many companies have put in place measures that said their companies cannot travel to a jurisdiction where the CDC has a ‘Level 4’ ranking.”

With 90 percent-plus of The Bahamas’ tourist arrivals currently originating from the US, Mrs Jibrilu continued: “This was having an impact on our groups, our conferences, our ability to host major events” such as Battle 4 Atlantis and the basketball tournament hosted by Baha Mar, which both “attract huge numbers of visitors”.

“These events were really under a question mark at ‘Level 4’,” Mrs Jibrilu said. “At ‘Level 3’, all of a sudden that means every manner of business can now return to the jurisdiction and we’re seeing it immediately. I think the hotels will tell you that the level of interest in The Bahamas as a destination has been tremendous, so they’re going to benefit.”

Acknowledging that the COVID-19 pandemic is “a very dynamic situation” which “changes daily”, Mrs Jibrilu said The Bahamas must do everything possible to mitigate the threat to group tourism by maintaining then ‘Level 3’ ranking with the CDC and, if possible, improving it.

“It’s incumbent upon each and every one of us to ensure we keep this ‘Level 3’ rating,” she added, referring to the COVID protocols of mask wearing, social distancing and hand washing. “That’s what’s gotten The Bahamas to where it is; a leader in the tourism space,” Mrs Jibrilu said.

“If collectively, together, we do what we need to do it means that not only does the Straw Market remain open but all those few other areas that have remained closed can open too, and people get back to work. At the end of the day, that’s what it’s all about. That’s what we do: Get people back to work in the number one industry.”

Looking ahead to 2022, the tourism director-general said: “As we look at projections, as it stands now, for the first and second quarter of 2022, our projections are trending very, very well. Sometimes I look at the projections, and I don’t just look at them in the context of The Bahamas, which is my primary interest, I will see how we are comparing to the region and comparing globally.

“It does give you cause to look two to three times’ and say: ‘Is The Bahamas really doing that well?’ If you look at where we are now, we’re in a very, very good place.”

The proof of the pudding is when eaten!