Cooper: We Must Learn To Co-Exist With The Virus 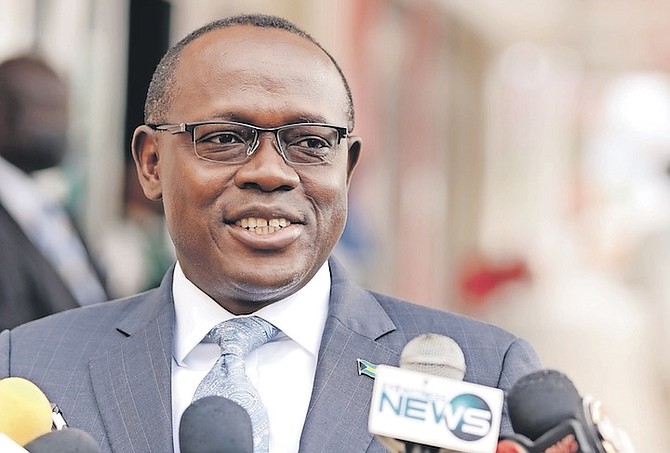 WHILE admitting the government is concerned about a fourth COVID-19 wave, Tourism, Investment and Aviation Minister Chester Cooper insisted Friday the country must learn to co-exist with the virus, saying COVID-19 is not “going away anytime soon.”

The minister made the remarks while defending the government’s decision to loosen virus restrictions and further re-open the economy in view of concerns about another surge.

This comes as some countries, including the United States and Europe, are seeing a rise in infection rates, prompting the re-implementation of restrictive measures in some jurisdictions.

Although cases have considerably declined in The Bahamas, some observers have questioned if the Davis administration may have acted too soon in eliminating certain restrictions.

Responding to those concerns Friday, Mr Cooper conceded the government does not make decisions blindly and without being guided by the latest data.

The minister further said the country can either choose to move forward or shut down its businesses and allow people to die from starvation.

“Let me just say that we’ve been very methodical in terms of making the requirements more relaxed first of all. We haven’t been loosened free in terms of what we’re doing. We have followed the science but we recognise that we have to live with COVID,” Mr Cooper said.

“If we find that we made some error in judgement in terms of the relaxations, we’ll adjust them but right now we believe that the new rules are working. We’ve promised the Bahamian people that we’re going to get out of the state of emergency and go back to a sense of normalcy and this is what we’re seeking to do. So far, so good.”

He said virus numbers are currently down because the government’s COVID-19 policies are working.

However, he also noted officials have not ruled out the possibility of a fourth wave and urged Bahamians to remain on guard.

“What we’re doing is working,” The Exuma and Ragged Island MP also said. “We’re expanding free testing and we have some pilot programmes running, this is going to continue. We’re going to start a very active public education campaign. We think that’s important, but we believe the restrictive measures in certain areas should continue.

“We’ve limited sizes in gatherings. I believe we’ve limited night clubs, etc, so I believe we’re making sensible practicable changes, but we have to recognise that COVID is going to be with us for a long time and we have to learn to live with it and that’s what we’re doing.”

Former Health Minister Dr Duane Sands earlier this week cautioned local officials to “get ready” for a potential increase of COVID-19 cases, insisting a fourth wave of the disease was imminent.

“Experience has shown us what happens in Europe and what happens in the United States is a reasonable predictor of what is likely to happen in The Bahamas and so, as goes the rest of the world, I believe we’re going to see a fourth wave and it beholds us to learn the lessons that other people have learned with horrible consequences,” Dr Sands told The Tribune recently.

“And so, the methods should be let us get ready, let us hope and pray for the best but prepare for the worst and that means to get vaccinated, adhere rigidly to the disciplinary approaches that work – social distancing, mask wearing, hand sanitisation, avoiding large crowds, etc, you know the drill.”

Since the start of the pandemic, The Bahamas has recorded more than 22,720 cases, with 248 of those still active as of November 24.

There have also been 671 virus-related deaths confirmed, while 68 still remain under investigation.

No Western fear mongering and non science informed vaccine prevents transmission of covid which was supposed the major event driving force that separated and gave false privileges, deadly hope to those vaccinated over false sure death to the unvaccinated. The economic social life (hotels,travel, cinemas, bars, gym spas,) driven Vax pass only works based on revaccination every 5 to 6 months. The script on vaccination attempted home residences, work places, foodstores, education even digital access life where proof of vaccinations would become the reset Golden Calf to modern life existence. Earth's population bound to vaccine pass has entered Africa as the continent dagely avoided the use of vaccines. Food self sufficient nations Hati,Cuba, Jamaica are also difficult to suppress into vaccinations mandate that does not prevent transmission but assists the vulnerable but so could good immune system and Ivermectin/Hydroxychloroquine theroputicals. 4c has today admitted that those vaccinated are getting ill with only solution being more vaccinations renamed as booster 1 then 2 then 3 all the way to the bank and will not stop transmission, death or illness.

No, you need to eradicate it.i guess it is easier to live with it, or easier for you to take the easy road.