The Kdk Report: My Neighbour’S Keeper 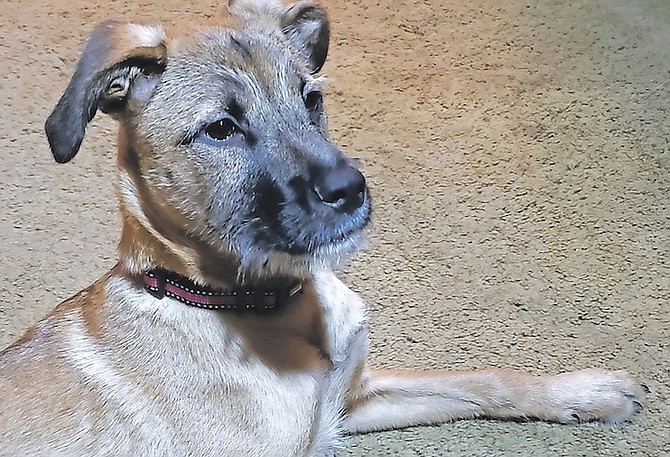 MALLORY, a potcake rescued after Hurricane Dorian in 2019.

In The Bahamas we have a special breed of dogs known as Potcakes. Colloquially named after the overcooked (burnt) rice at the bottom of a pot that nobody wants, these dogs are incredibly resilient. As such they appeal to those who like animals but are not so crazy about caring extensively for them.

Potcakes come with all sorts of advantages. They’re free, plentiful and easy to maintain, meaning self-sufficient as much as a dog can be. No food handy? No problem. A Potcake can turn into a Garbage Can Pointer in no time. They’re so remarkable, in fact, that they are the only non-pedigree dog recognised as a breed by the American Kennel Club.

Growing up my siblings and I had three Potcakes - well actually my brother and sister had them, whereas I was more of a reluctant observer with transient custodial rights. But Fritz was my absolute favourite. He didn’t have a proverbial salty attitude like his sister or a jarring lack of common sense like his nephew. No, Fritz was a total rock-star champion.

He was resoundingly more excited to see me than anyone else. Then one evening, when I went outside to help my dad bring in some groceries, he became hyper-excited since I hadn’t had a chance to play with him earlier that day. He ran to the gate and back and then out into the road and was instantly struck by a large white truck. The driver was notably intoxicated, slammed into our neighbour’s wall and sped away.

I ran to help, breathless and flat-footed with no shoes on, but there was nothing that I could do. Fritz died some ten minutes later as I stayed by his side. Too overcome with emotion, I never said anything. I just sat there quietly in shock. I was eight years old at the time. In retrospect I wish I had said something, shown my pain or sorrow or anger. To this day it remains my one eternal regret. Indubitably, and without hesitation, I can attest to the fact these moments stay with you forever.

It’s not something that’s mentally ever-present but I do think of that day from time to time and was recently reminded of it when speaking to the patient highlighted in today’s report. In 2014 and at the age of 59 she was nearly killed after being hit by a van. This patient’s past medical history was normal. She was not on any medications, had no allergies and had not undergone any previous surgeries and only became a patient of mine after the accident that nearly stole her life.

She awoke that sunny Saturday morning feeling great and excited because her daughter and other family members were competing in a marathon. She went to cheer them on and show support. During the race, she stood at the bottom of Fort Charlotte and was about to cross the street. Just then she heard a loud screeching noise and felt a massive shocking blow to the back of her body. She flew forward with incredible force and lost consciousness immediately. Within seconds, she awoke to extreme, searing, agonising pain only to realise that a large van was sitting on top of her. The van had been coming down the hill and the driver wasn’t paying attention when he smashed into her with ferocious speed.

In that moment, the driver attempted to take off and, in doing so, scraped her flesh and underlying soft tissue from off her bone from her elbow to her knee. Her distal leg and ankle took most of the impact and was shattered into multiple fragments. She also crushed her coccyx (tailbone) which accounted for the massive pain in her hip and she sustained lacerations to her face and neck.

Fortunately, bystanders ran over to help. They pounded on the oversized van to stop it from rolling over her entirely, which in all likelihood saved her life. My patient was in shock. It all happened so quickly and the pain was unbearable. In the distance she heard her sister scream with deep heart-breaking intensity but she was comforted to know that if she were to die there, at least her sister would be by her side. Police nearby ran to assist. She was pulled from underneath the van. She recalls being loaded into a car, holding her sister’s hand. Because of the marathon a lot of the roads were blocked, which is why they opted to take her to the hospital themselves rather than wait for a potentially delayed ambulance. The fear was that she was bleeding internally and would die within minutes.

Fortunately, the surgery she underwent was successful. The patient survived though her recovery took a full six months and to this day, she struggles with anxiety just taking a walk or getting behind the wheel of a car. During the initial recovery period, she had a cast and ambulated with the use of crutches, grateful to be alive. She was on pain medication and underwent an intense physical therapy regimen for several months that focused on pain management and helping her regain strength and stability.

I performed a gait analysis on her and subsequently provided advice regarding proper footwear and ankle support. Over the years, she has made remarkable improvement. Speaking to her earlier this week, the message she hoped and prayed readers would take away from her story was to just slow down. Slow down as a driver and slow down as human beings to enjoy and appreciate your loved ones because, without warning, it can all be gone in an instant.

My patient’s ongoing trauma-induced anxiety is an emotion shared by an innumerable number of cyclists and pedestrians throughout our capital who have experienced a threat to their lives, though few, if any, as severe and traumatic as this patient.

Perhaps while the Thanksgiving holiday sentiments are still upon us, we can collectively take a moment to reflect on what being my neighbour’s keeper truly entails. The bystanders who ran to my patient’s rescue and yelled, screamed and banged on the van to prevent the driver from propelling over her impaled body intrinsically understood this concept. The standard saying is to be ‘my brother’s keeper’ but it’s not realistic to expect people to always treat strangers like family. So, I offer instead that we be ‘our neighbour’s keeper’ and give others the respect and kindness that this label so richly entices.

It’s been over 30 years since my Potcake Fritz was killed and I’ve never wanted to get another dog. In fact, playing with my niece’s puppy (Cash) has more than fulfilled that desire. But who knows? I will, perhaps someday soon, but that’s a story for another day.

• Nicknamed ‘The Prince of Podiatry’, Dr Kenneth D Kemp is the founder and medical director of Bahamas Foot and Ankle located in Caves Village, Western New Providence. He served as the Deputy chairman for the Health Council for five years and he currently sits on the board of directors for the Princess Margaret Hospital Foundation in his role as co-vice-chairman.