A Time To Heal: Pintard Concedes Party Made ‘Unforced Errors’ As He Issues Call For Unity 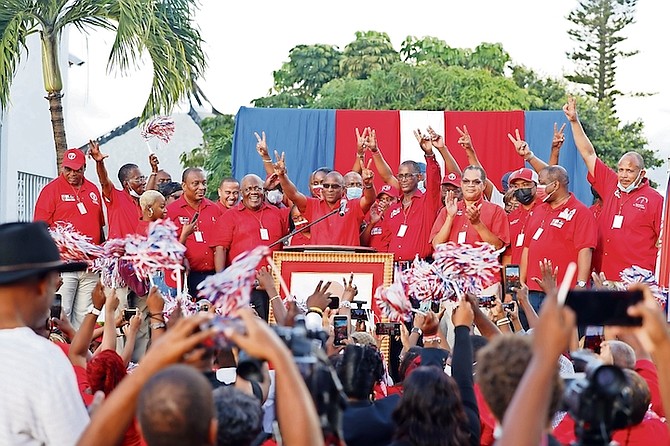 Michael Pintard celebrates, surrounded by fellow FNMs, as he is elected leader of the party on Saturday.  Photo: Racardo Thomas/Tribune Staff

MARCO City MP Michael Pintard became the sixth leader of the Free National Movement on Saturday and immediately called for unity in the party and a plea to disillusioned supporters to return to its ranks.

The result of the convention, which was held at the Holy Trinity Activity Centre, gave the former FNM chairman the mandate to steer the party after its demoralising general election defeat and positioned him as the person most likely to lead the party into the next general election.

Mr Pintard had been the frontrunner for the post since the FNM’s loss in September, having galvanised supporters who cite his eloquence and appeal to the general public as winning attributes. He won a greater share of votes in his constituency during the election than any other FNM candidate.

On Saturday, Mr Thompson and Mr Lewis ushered him to the stage in a show of unity as chants of “Pintard” broke out.

Adrian White, the St Anne’s MP and leader of opposition business in the House of Assembly, said the party is eager for him to be sworn in as leader of the official opposition, something that could happen as early as this morning. 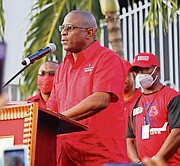 “We would like to enter the House before commencement of the debate on the supplementary budget and the VAT legislation with our new leader sworn in as leader of the opposition,” Mr White said yesterday. “We most definitely think that will happen this week. We are making every effort to see it happen (this) morning.”

Mr Ingraham and Mr Turnquest embraced him on stage on Saturday. However, Dr Minnis, with whom he has had a strained relationship, did not attend the ceremony.

Under Dr Minnis’ tenure, several prominent figures and factions in the FNM felt marginalised. Mr Pintard made unity and reconciliation prominent themes of his leadership campaign, repeatedly saying he will work to bring back those who felt sidelined.

“Our collective genius is always better than a single-minded focus of a leader or a small group of leaders,” he said during his victory speech. “We need all of you. That’s why we sent out the clarion call, asking FNMs who felt marginalised or disenfranchised or who had left. We’re saying to you, we wish for you to return home. We understand that we are weaker without you. You are at the centre of our consideration. We are asking you to return to the organisation that we built.”

Recognising the former FNM parliamentarians who ousted Dr Minnis as leader of the official opposition in 2016 and were subsequently sidelined for doing so, he said: “We’re calling on our sister, Loretta Butler-Turner, we want you to know the tent is open, feel free to join us. Hubert Chipman, Richard (Lightbourn), Neko Grant.”

He added: “I told our immediate past leader, I said sir, Dr Minnis, know that I will be blowing up your phone on a regular basis, sir. You are on speed dial. We intend to utilise the skills, the network, the talent of our former Prime Minister Hubert Alexander Minnis.”

Mr Pintard has said he wants Bahamian politics to be less tribalistic. He said under his leadership the FNM will constructively engage with the governing Progressive Liberal Party.

“Many Bahamians are relying on us, the Free National Movement, as an opposition force to hold the government’s feet to the fire,” he said. “But they also want us to constructively engage the government and to make recommendations on legislation, on policies, on programmes so that the government might function properly and our country can grow from strength to strength.

“It is not in our collective interest that this government fails. It is true that early indications are that there will be some who engage in excesses in the management of their portfolios but from the bottom of our heart we wish them success because more importantly we wish our country to succeed.”

Mr Pintard said while the last FNM administration did much to be proud of, it also made missteps.

Voting at the convention.

“We know that part of our loss had to do with having to make very difficult decisions that were difficult for a population to embrace, but lest we make the mistake of not listening carefully to the population we also had some missteps,” he said. “We made some mistakes. We had some unforced errors. The truth is sometimes we didn’t listen to you the way we ought to. Sometimes we forget that we are your servants, we work for you, that we have temporary jobs.”

Among the first significant decisions Mr Pintard will have to make is whether to change the make-up of the Senate. Dr Minnis appointed Viana Gardiner, Reuben Rahming, Darren Henfield and Maxine Seymour to Senate posts. It is not clear if Mr Pintard will keep them all in place.

“I have no comments on the senatorial appointments,” he told reporters on Saturday. “We are going to have a discussion as a family and then we are going to address that issue publicly.”

The FNM will have another convention in February when the party will vote for chairman, deputy leader and other posts.

In the meantime, Mr Pintard said FNM officials will tour constituencies and talk to party supporters.

“We intend to convene a conclave immediately after the February convention to make sure that we’re able to share the post-mortem so that we can go beyond the anecdotal evidence that we have in terms of what went wrong,” he said. “We are going to commission the studies to be done which will be ready in time for February. We’ll discuss that post-mortem. We’ll plan the way forward.”

• The original version of this story incorrectly said that Michael Pintard was the fifth leader of the FNM. It has now been corrected.

After all his dire warnings to Bahamians about not letting their guards down and adhering to protocols, I see Dr. Sands in an unmasked crowd with his mask under his chin.....suck teet.

Practice what you preach, or go home.

Duane Sands is and always will be a lame-brained hypocrite of the highest order. Pintard would be wise to keep him at a distance, even within the public health system. After his fiasco performance in the last FNM administration, Sands really should have no voice whatsoever in our public health system.

What IS the current law/regulation on the wearing of masks and the practising of social distancing??

More questions than is answers about how Miinnis was given free-range by cabinet colleagues ,who wouldn't dare risk political jobs by confronting him?
But it's still not clear if Minnis's puppet controlled Kwasi Thompson, still is control by using wires sufficiently to keep Minnis seated in his job as official opposition leader in the House of Assembly and everything else like this and that.
The photographer did an excellent job at capturing the exact same Minnis "chickens" that are now hailing the accomplishments" of another.**
Notice Pintard, didn't utter a word about transparency under his leadership, nor OBAN, nor PI's 150 year lease not The $150 million dumped into The Grand Lucayan Hotel, nor who financed his campaign ― Yes?

Open the link below for a trip down memory lane about Pintard and Minnis's relationship with the well known criminal thugs Toggie and Bobo. LOL

The only healing needed is the Bahamian people who have been hurt by this FNM Party of which Pintard was a part. He went along with whatever the doc did. Pintard and TOGGIE and Boogie.

Pintard is just another Masterful FNM liar who wants the Bahamian people to believe Saint one day and Devil the next.