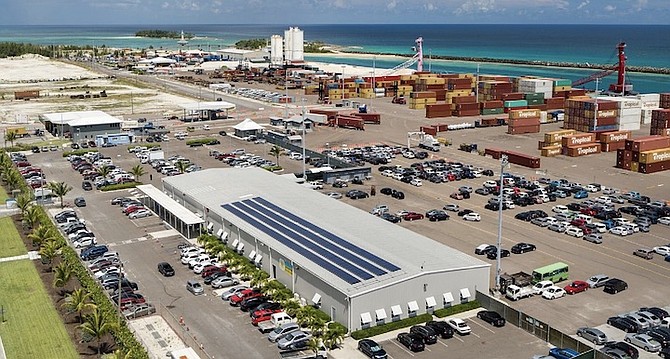 • Yet 11% ahead of last year as economy revives

New Providence’s commercial shipping industry has suffered “no significant” impact from global supply chain disruptions with container volumes up 11 percent for the two months to end-August.

Based on data for the first two months of APD’s current financial year, which started on July 1, container volumes passing through the Arawak Cay-based commercial port remain more than 1,100 down on the numbers that were processed and cleared during the same period in 2019 - the last pre-COVID year.

Pointing out that it was “not easy” to close such a gap quickly, Mr Bethell said the traditional “season” for Christmas inventory imports by retailers and wholesalers - which normally starts this month for APD - will give a better indicator of future container flows at the port as well as the overall economy’s strength.

Yet, compared to the 12,082 TEUs processed by APD in July-August 2019, container volumes are still 9 percent down on their last pre-COVID comparisons. “While we are about 11 percent over what we did last year, being in the midst of COVID-19, against the prior period pre-COVID we are still running about 9 percent down,” Mr Bethell added.

“The difference between that and now is a little over 1,100 TEUs, and it is not easy to make that volume up quickly. It will be difficult to be honest, but the good thing is that we are at the beginning of October. A lot of the wholesalers, and the Kelly’s of this world, bring in their merchandise for Christmas. We really move into that season in October.”

Mr Bethell added that it was difficult to predict import and TEU volumes for Christmas 2021, as these have yet to really materialise, while he added that September was traditionally a slow month for the shipping industry due to back-to-school and the end to vacations.

This year also contained the added distraction of a general election, but its precise impact cannot yet be measured as APD is still finalising September numbers. However, Mr Bethell said The Bahamas has to-date largely escaped any impact from global supply chain disruption stemming from factors such as container shortages, shipping delays and manufacturer backlogs.

“We have not seen a significant impact on our volumes primarily because the lion’s share of cargo for this market comes out of the North American market,” the APD chief explained.

“There have been some delays for those importers that bring in containerised cargo from Europe and Asia. That is principally because of containers; insufficient containers to meet the demand. Those volumes to this market are not significant.”

However, Mr Bethell said APD’s break bulk cargo volumes were likely off because fewer Bahamians were shopping abroad and shipping back ‘big ticket’ items. “While Bahamians are travelling internationally, it’s not to the extent they would have this past summer to go on vacation,” he added.

“A lot of times when they are shopping in Florida they send stuff back. We still see a fall-off on break bulk cargo. Those volumes are still down. While the vaccine is there, there’s still some hesitancy to travel to COVID ‘hot spots’ such as Florida, so people are not travelling at this time.”

Mr Bethell revealed that APD’s TEU forecasts for the first two months of its current financial year, which closes at end-June 20223, have been largely spot on. “July and August have been pretty much flat against budget, only six TEUs off at 10,952 compared to 10,946,” he told his newspaper. “I call that flat to the extent our volumes are pretty low. On the vehicle side, we’re off by 24.”

Tonnage volumes were slightly up due to the repatriation of heavy equipment required for dredging at Prince George Wharf as part of the $250m Nassau Cruise Port expansion. “We would also have had some project volumes related to rock, sand and cement,” Mr Bethell added.

“There was some concern worldwide with cement, but we’re back on track where we see scheduled arrivals of cement vessels. We’ve seen some exports of sand mined locally. Our tariffs on those have been designed to encourage exports so they are not over-bearing on the exporter. There’s not a tremendous amount of volume associated with both those exports.”

The APD chief said the refinancing of the port operator’s near-$31m preference share debt with cheaper commercial bank funding, and which will slash its debt servicing (interest) costs by some $4.5m per annum, will start to be felt shortly.

With the switch occurring on September 6, 2021, APD will go from paying interest of 5.5 percent on its preference shares to a rate of Prime minus 1.15 percent - 3.1 percent - on its new bank debt, resulting in a 2.4 percentage point reduction on its debt servicing costs.

“We will see a sizeable saving to our bottom line as a result of that,” Mr Bethell told Tribune Business, “but we won’t feel a significant impact until the end of the year.” While legal, professional and other auxiliary fees were incurred in putting the bank facility in place, he added: “The net result is still a positive one for our financial statements.

“We continue to battle on, and find some innovative ways to keep costs down and continue to manage debt.” No financial figures were provided as APD is currently in a ‘closed’ period ahead of publication of its 2021 full-year and fourth quarter results.

Despite the economy being practically wide open now, many businesses are still struggling to meet overhead. Some have accumulated huge rent and mortgage arrears that will have to be tackled. And the economy is still very fickle. Because consumers also are in debt. And with government discontinuing it’s injections into the economy vis a vis food distribution, unemployment assistance and financial assistance to businesses, some businesses will really feel the rubber hitting the road. Hopefully tourism will rebound sufficiently to keep these businesses afloat.

The chicken have come home to roost for many Bahamains. They are now coming to realize that the change in government will not be the savior for the many situations they find themselves in as it relates to Food security, and employment. We like the children of Israel who did not reach the promise because of their many transgressions need a mindset change in action from the government down to the smallest man. Failure to do so may render this country to proverty levels we have never seen. Our collective life styles from independence demonstrates that we have been fooling ourselves

who thought changing govt would change anything? Didnt you get the memo that an unheard of 40,000 people didnt even bother?