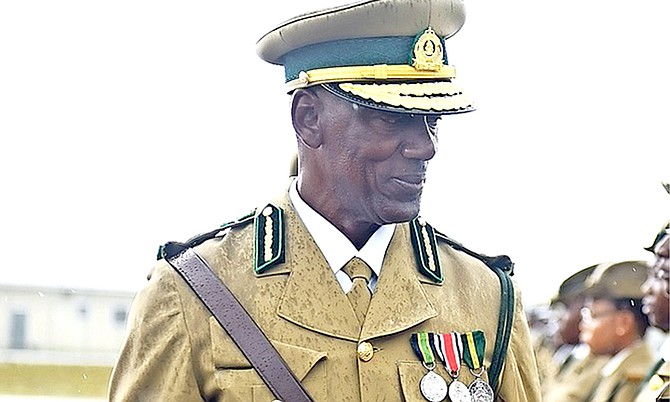 THE decision to send Corrections Commissioner Charles Murphy on administrative leave “is foul and inappropriate” and proves “something is amiss”, according to Mr Murphy’s lawyer Romona Farquharson Seymour, who yesterday urged Prime Minister Philip “Brave” Davis to intervene or publicly address the matter.

Mrs Farquharson Seymour defended Commissioner Murphy’s handling of Prescott Smith, the matter that sparked his removal, and highlighted National Security Minister Wayne Munroe’s role in a 2019 lawsuit that sought to quash Mr Murphy’s appointment as commissioner. She said that matter is evidence of Mr Munroe’s bias and questioned whether Mr Davis was aware of Mr Munroe’s role in the case.

“How do we view,” she said, “that the very thing you were petitioning and asking the court for, the removal of Mr Murphy, which you were asking for in your private capacity, now in your public capacity has come to fruition? Is that a coincidence, happenstance, is that what we are supposed to accept?”

Mr Munroe has said that sending the commissioner on administrative leave was driven by the prison’s handling of Prescott Smith, a prominent Andros Progressive Liberal Party supporter who Mr Munroe said was being kept in prison in a possible breach of Justice Loren Klein’s Supreme Court order. Mr Smith reportedly tested positive for COVID-19 in prison and was quarantined in a cell with three other people.

Mrs Farquharson Seymour, however, said there is more to the story than what has been publicly revealed.

She said Mr Smith’s lawyer, Keod Smith, went to the prison on September 24 “after the hours of release” and presented an officer with Justice Klein’s order.

“The officer scrutinised the same and questioned the validity of it because it was not a release certificate, it was a court order,” she said. “In order to be released from the prison there is a particular document called a release certificate that is prepared by the courts. It would then be sent down via Central Police Station or whichever means, and an officer would present it to the prison and then the process begins for the release of whomever is in custody.

“That was not the case on Friday when Mr Smith arrived. On Monday, again Mr Smith arrived at the prison, still with no release order and the prison began their inquiries and once they did I’m advised they would have eventually spoken with Mr Turner who is the criminal registrar and who would’ve explained that ‘listen, it doesn’t work that way, the attorney ought to have brought the order to us and then we would put out the proper release certificate, prepare it and have it sent to the prison.’ The officer was then asked, ‘please tell Mr Smith (to) make his way to my office, come so that we can properly deal with the matter.’ So regardless of whoever dropped the ball, whether it was Keod Smith, whether it was the courts, we say it was certainly not the commissioner or his officers. The Corrections Act is very clear, Section 28.2 speaks to the hours of release between 8am and 4pm. If a release happens to become an issue on a Saturday or Sunday or a public holiday, then the release would take effect the next working day. And so (the commissioner) maintains he did nothing wrong.”

Mr Munroe’s firm, Munroe & Associates, filed a lawsuit in 2019 on behalf of the prison Deputy Commissioners Doan Cleare and Bernadette Thompson-Murray. The pair alleged that former National Security Minister Marvin Dames forced them to take vacation leave to facilitate the promotion of Mr Murphy, their deputy. Last week, as Commissioner Murphy took his absence, Mr Cleare and Mrs Thompson Murray were ordered to return to their roles at the prison.

Mrs Farquharson Seymour said Mr Munroe himself presented the application for judicial review for Mr Cleare and Mrs Thompson-Murray’s matter to the Supreme Court; the application was granted by Justice Indra Charles.

She said: “On the 10th of May 2019, Mr Munroe, his office, Munroe & Associates, filed an application for judicial review and the crux of this application was very much to do with Mr Murphy’s appointment, seeking, asking the courts to quash his appointment as commissioner. There are allegations here that he was not qualified to hold the position, that the Public Services Commission acted irregularly. And this is a live action. I’ve listened to the different press reports, read in the newspaper where I believe it was stated that the minister doesn’t quite recall if he appeared in the matter or knows about the matter. Well again we find that curious because this matter was set to be heard some two weeks before election and a letter was sent from Munroe & Associates requesting an adjournment.

“Do you believe (Mr Munroe) forgot that he was representing Mr Doan Cleare and Bernadette Thompson-Murray? That’s a matter for the people.”

She said Mr Munroe should have recused himself from decision-making in the matter.

“I believe it would’ve been proper for him to remove himself if in fact there were credible allegations or complaints, to declare his conflict and then remove himself from the process,” she said. “There are certain ways internally regarding how government works. It could’ve been laid over to the permanent secretary and then she, of course, present to the requisite body and then make a determination and, of course, once it goes to the committee there are certain show cause letters that ought to be issued where Mr Murphy can then speak and answer what these allegations are.”

Mrs Farquharson Seymour could not definitively say if she will take legal action on behalf of her client; she said that will be a last resort that depends on how Mr Davis responds to the matter.

However, she said she believes the process by which the commissioner was placed on leave could be improper.

“When I look at General Orders at Chapter 11,” she said, “it deals with the disciplinary procedure and disciplinary powers. It states here that the permanent secretary, once a complaint was levied to her, it ought to have been directed to the Public Services Commission for their direction on what role to take, what procedure to take. We don’t see where that was done, so, yes, we do question the validity as to how this was carried out, placing him on immediate administrative leave.”

“With respect to the training,” she said, “the institution is supposed to appoint a committee. Again, Mr Murphy, he says, has made several requests from as early as 2018 asking the Ministry of National Security, please appoint two deputies and other assistant commissioners. With the limited human resources he had at his disposal he then put trained persons with the experience to fill those positions until time but again his hands were tied. Is it fair then with that knowledge to then criticise and say you’ve done something wrong, you’ve been operating illegally?”

She also defended the commissioner’s record on COVID-19.

“(The commissioner) said fewer than five inmates had to be hospitalised due to COVID under this administration and that we say is remarkable. From March 2020 to August 2021 that is remarkable,” she said.

Yesterday, Mr Munroe said the process leading to Commissioner Murphy’s administrative leave was proper. He said because no disciplinary action has been taken against the commissioner, the need to involve the Public Services Commission like Mrs Farquharson Seymour described does not arise.

“The press release I gave was very clear that at this point there is an investigation as far as I’m concerned for my purposes. If there is cause for disciplinary action then, of course, that would likely be done, but, firstly, I would want to have an independent person have a look at it, someone who knows about correctional services,” he said.

Appears that the Guardian's Talkie Show's Host Comrade Juan and everything on payroll Guardian likes that's — thinks is the case that the The Colony's new Security Minister's move against the Fox Hill prison chief — Is runs a ‘foul and Inappropriate' move stretches beyond his ministeral charge and everything likes that's by someone has the — on-air grind in for the crown's new security minister?
Comrade Juan, might've first revisted his radio station's historical and lenghty file on the Reds security minister Marvin and his everthing Fox Hill Prison likes that's — was much likes to that the new Fox Hill Prison minister, — Yes?