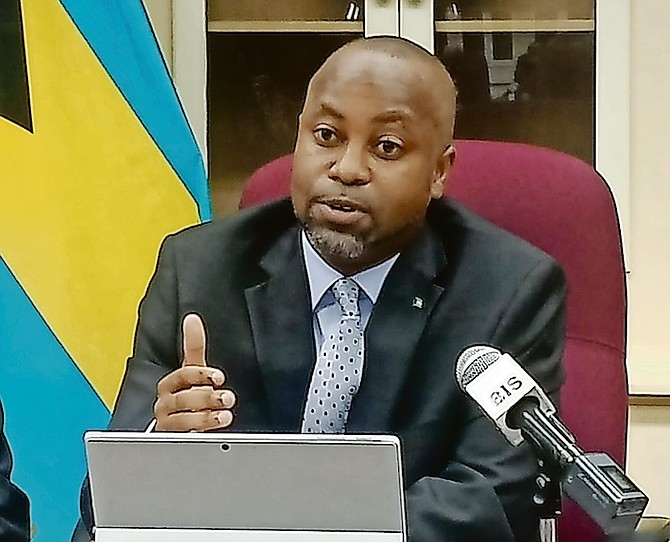 The Government’s planned VAT rate cut will slash revenues by $160m per year, an ex-Cabinet minister asserted yesterday, as he slammed its “silence” on how extra spending will be paid for.

Kwasi Thompson, former minister of state for finance, said in an e-mailed statement that the Davis administration’s proposed two percentage point VAT rate cut to 10 percent would cost the Public Treasury some $800m if applied across its five-year term.

The Progressive Liberal Party (PLP), while in Opposition, suggested the VAT rate cut would only initially be applied for one year to see if it resulted in increased revenue by stimulating a greater volume of economic transactions. However, there was no mention of any one-year restriction or ‘trial’ in Wednesday’s Speech from the Throne.

No empirical studies, though, have been produced to justify the move or show what impact it will have on government revenues and the overall fiscal position, as well as the wider economy. However, the newly-elected administration effectively doubled down on its VAT rate cut pledge during Parliament’s opening by promising that it will be applied “across the board”.

No specifics or timelines were given in the Speech from the Throne, with some observers wondering whether “across the board” means it will eliminate the complex and costly exemptions introduced by the former Minnis administration. The absence of details was cited yesterday by Mr Thompson, who accused the Government of preparing to pursue “fiscally irresponsible policies”.

Questioning how the Davis administration’s will finance its expanded social initiatives, amid the worst economic and fiscal crisis in The Bahamas’ history, when it is cutting the Public Treasury’s main source of revenue, Mr Thompson blasted: “The Speech makes it clear that there is a dramatic shift from the fiscally responsible policies that are required for a robust recovery.

“The Fiscal Responsibility Act was introduced to prevent arbitrary shifts in economic policy. The reduction in VAT will result in an estimated $160m [less in] annual revenue - or $800m over five years - at a time when the country’s resources are strained. The PLP policies have only signalled more and more spending but have been silent on how it is to be paid for.

“The Government must account to the people, as is required by law, how they intend to justify the reduction in revenue. The PLP seems determined to pursue fiscally irresponsible policies to accomplish a reduction in VAT, a further reduction in business-related taxes to be provided as incentives, and proposed social and infrastructure spending.”

Mr Thompson, while still minister of finance, said earlier this year that the then-Opposition’s VAT cut plan would cost the Public Treasury some $100m per year. He did not explain how it had increased to $160m per year, but yesterday pointed to the omission of any strategy to cut the $440m annual taxpayer subsidies that keep struggling state-owned enterprises (SOEs) afloat.

“The Speech [from the Throne] fails to address the seriousness of our fiscal situation. It does not address the ongoing necessity for tax reform, and for reform of the SOEs that are critical to fiscal consolidation over time,” the former minister added.

“The PLP has again promised to reduce VAT without providing any clear plans on how the reduced revenue will be replaced. It failed to provide a timeline on when this will be done. The PLP has promised to increase old age pension benefits but has not said how the same will be funded. Do they intend to increase NIB rates? Why didn’t they say so?

“The PLP has promised to introduce a catastrophic health insurance plan. Do they intend to have all Bahamians pay a monthly insurance premium to cover this insurance? Why didn’t they say so? The Speech also provides for exponential increases in expenditure without a clear plan, or even mention, on how they are going to pay for such a dramatic increase in expenditure.”

Mr Thompson said the new administration appeared to be trying to pull-off “an impossible calculus” where spending was increased despite a reduction in revenues - an action that, in theory, will maintain huge fiscal deficits and corresponding national debt increases despite the latter already being greater than the size of the economy.

However, Prime Minister Davis signalled he is fully aware of the fiscal realities during Parliament’s opening, when he said “the day of reckoning is here” and that multiple problems which have been “postponed” for too long must be tackled now.

The Government’s Blueprint for Change campaign manifesto hinted that it would seek to make up for tax revenues foregone in a VAT cut via better enforcement/compliance, and collection of existing taxes, as well as real property tax revenues from high-end, luxury properties.

Still, Mr Thompson argued: “The Speech [from the Throne] says little on the difficult but necessary decisions about tax enforcement or tax reform, which are still required to make our tax system more equitable.

“There was little discussion on the critical reforms necessary to our SOEs, which continue to be a drain on the public purse. How will they enhance revenue, and what programmes will be cut to sustain the additional spending proposed? There was also no commitment not to raise taxes, which is telling given the plans for significant increases in spending.......

“Details are critical. This is especially true on the matters of tax reform and fiscal policy, where the Government must explain how it intends to both cut taxes sharply and introduce major new spending initiatives. Either they are not telling Bahamians the whole story - that we will have to pay more taxes and fees to cover their promises - or they do not intend to keep the promises they have made.”

The Davis administration, via the Speech from the Throne, pledged to “enhance social assistance” and continue alleviating the devastating impact from Hurricane Dorian and COVID-19, although it was again light on details and how this extra spending will be financed.

In particular, its promise to increase senior citizen pensions and benefits for persons with disabilities will seemingly impose an extra burden on the National Insurance Board (NIB) just as it is trying to replace the $100m-plus in liquidity drained from it via COVID-19 benefits payouts.

And actuaries have consistently warned that NIB’s $1.6bn reserve fund will be exhausted come 2031 unless contribution rates are increased, benefits cut or a combination of the two.

And that $160 million Kwasi speaks of is less than the amount the previous cabinet, in which Kwasi served, squandered on the Grand Lucayan Hotel debacle alone.

Kwasi thinks that the hotel deal and OBAN was great. he has a problem only when the poor will receive a little.

The FNM government do all they can to keep the poor under their feet.

Where is the money from Dorin Kwasi, the one point five Billion dollars?

Does Kwasi have expertise in finance? Why are they asking him to comment? I got the impression he was just placed there because Minnis thought he was one of the few people in parliament he could trust.

The NIB‘s reserve fund is fiction. Nonexistent. The money has been spent (wasted) so the NIB is unfounded best case has a worthless claim against the government. All fiction by people who never attended accounting basics.

VAT should go to zero. Hope also that tourists stop coming here altogether. The money they spend just disappears just like VAT disappears. It does not help Bahamians.

Whenever tourists stop and ask me for directions, i just tell them i live here but im just as clueless as they are.

We need to stop helping visitors cause their money dont help us. It goes into the "consolidated fund" and that's the last you hear of it.

Kwasi knows there is no intention to compensate for the revenue they will forgo. We will just let the national debt keep climbing. It’s a lot easier to blame the IMF when they impose tough times on us than to do it ourselves.. you all know the playbook option, victim syndrome.. we are being bullied, it’s no fault of ours right?

It It matters not who the messenger is, the message is valid. It makes zero sense to reduce
VAT . The treasury needs more, not less infusion of funds.