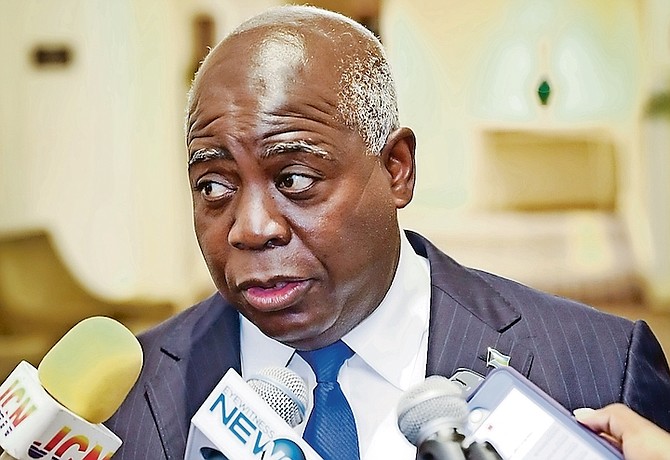 PRIME Minister Philip “Brave” Davis said his administration does not intend to cancel any of its commitments despite the country’s current financial situation.

He spoke to reporters on the sidelines of a National Honours ceremony at the Hilton.

Yesterday, Mr Davis said his administration has yet to determine what some of the first bills it will bring to Parliament will be but said an amendment to the value added tax legislation will be a priority.

“We have not decided as a Cabinet as yet,” he stated. “So, we know that we have to meet certain commitments (but) it may not necessarily require legislative intervention. For example, the VAT reduction requires that, so that will be one of the first items we put on the agenda.”

He also said his administration is also looking at “recasting” the current budget to get it in line with the country’s true state of affairs.

“We are now looking at recasting the budget because what we are finding is that the budget was not truly a reflection of what the state of affairs were, but rather just a wish list to get over an election. So we hope to revisit the budget and perhaps that might be the second most important thing we do is to recast the budget for the next nine months to enable us to carry out our functions.”

I want that hospital you promise here in Grand Bahama.. a new one.

Davis and Sears need to get access to the mega millions of ill-gotten profits and assets of their 'numbers boys' like Adrian Fox, Sebas Bastian and Craig Flowers in order to fund all of those "New Day" commitments made by Davis while on the campaign trail. Either much, much heavier taxation or outright confiscation should do the trick when it comes to the ill-gotten enormous wealth of these very despicable low-life criminal thugs.

We are in desperate need of a National Lottery to help fund the financial needs of not only only our public health system but also our public education system. But don't hold your breath waiting on Davis or Sears to do the right thing and promote the establishment of such a lottery. They're both just too conflicted and compromised by their close ties and business dealings with the super wealthy crooked numbers bosses like Sebas Bastian, Craig Flowers and Adrian Fox.

Recast.......Aka throw the line out to see if they can catch a fish (no doubt a loan, tax increase, or other move to pillage money from somewhere) Want to save 100% of your construction budget? Stop accepting cost overruns and Contracts at $500/sq ft for an outhouse!

True that!! The Bahamas. . ."COME AND OVER-RUN ALL YOU LIKE". . .they just pay whatever you ask for!! THE OVER-RUN CAPITAL OF THE WORLD!!