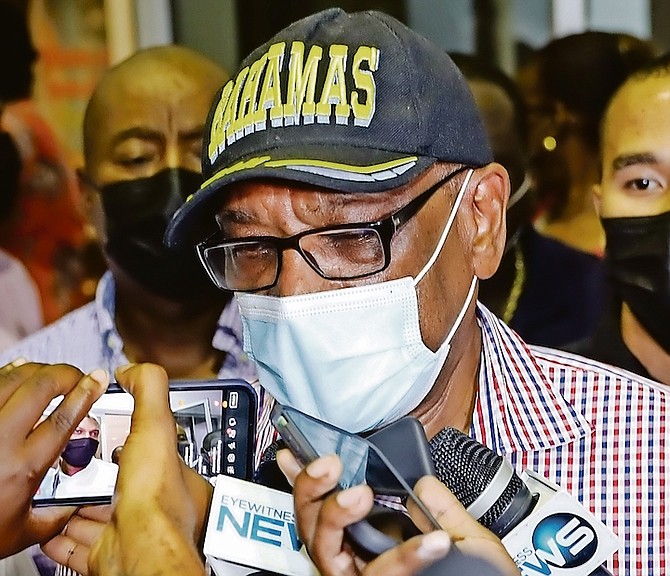 FORMER Prime Minister Dr Hubert Minnis has called on health officials to aggressively investigate the recent spike of COVID-19 cases on Inagua, as some residents there call for more restrictive measures.

A few residents have attributed the increase in cases in the small community to last month’s political activities.

Over the weekend, the Ministry of Health reported that Inagua has 23 active cases of the virus, with 34 people currently in quarantine for COVID exposure. According to the ministry, five Inagua residents have been airlifted to New Providence to receive care for COVID-19, while two people have since died from the virus. The ministry also said two other people from Inagua developed COVID-19 symptoms while in New Providence and subsequently died.

The report came after concerns were expressed by residents about the stark rise in COVID-19 cases and deaths on the island, with some even calling for a full lockdown of the community.

Health Minister Dr Michael Darville reportedly identified the confirmed cases as “clusters” during an on-air interview on Beyond the Headlines with host Shenique Miller.

Speaking to The Tribune about the situation in Inagua, Dr Minnis said: “The Ministry of Health needs to investigate and report to the public what is happening on that island. I want health to kindly investigate what is happening in Inagua. The residents of Inagua are frightened and they want additional restrictions to prevent further spread of the virus.

“The longer the delay, a possible set up for disaster in our southern islands (can occur)... Inagua and other islands have limited health facilities. If not attacked aggressively (the situation) can lead to more unnecessary death,” Dr Minnis said.

In a statement on Saturday, health officials said they were closely monitoring the situation on Inagua as well as several other southern Family Islands, including Mayaguana, Crooked Island and Acklins.

The Tribune was also told that a mother and a daughter from Andros were recently airlifted to the capital after testing positive for COVID, but the daughter later died.

“The Ministry of Health advises that Minister Darville is acutely aware of the COVID status on these islands and is actively engaged. Already, Minister Darville made provisions for additional unused oxygen tanks located in Mayaguana to be transported to Inagua with swift use,” according to the ministry’s statement.

Health officials did not make it clear where the latest outbreak on Inagua originated, but residents think the spike stemmed from recent election campaigning and celebratory events.

“From the time we had the election, that campaigning with all those people moving up and down and backward and forward, they brought a disease in here,” one concerned resident, who asked to remain anonymous, told The Tribune yesterday.

“From the election, we have four dead and we done ship out about six,” the resident claimed. “We ship out one last night. We have a next one now in the hospital and many more who ain’t saying nothing and they trying to deny it and this came out of the PLP’s headquarters.

“They trying to say it been around long time but we never had a spike like this from before election, only after that campaigning and stuff. Inagua gone haywire like this.”

Some residents claim that locals there were letting their guards down way before the general election.

“I think the letting down of the guard was even before election because even before that, you had people kinda going to discos and moving around and we have a shop here and we have to be constantly telling people ‘put on your mask, put on your mask’,” said another resident, who asked for his name to be withheld.

“And, yes, during election time, both parties allowed it to just circulate amongst themselves gathering together and especially after the election, the celebration started then.”

The resident said while the island has grappled with COVID-19 spikes in the past, the community has never experienced such a deadly and infectious wave of the virus as this one.

Asked if he believed tighter measures were needed to get the situation under control, the resident said while he’s not against more restrictions, he believes there just needs to be a greater adherence and enforcement of current health measures.

“I think a lockdown would help, but if we would all follow the protocols of wearing masks and constantly sanitizing and washing our hands and social distancing, it’s almost the same thing as a lockdown. A lockdown means well nobody can go anywhere, but people still find ways to slip around and sneak around during lockdowns and I have seen it happen,” the resident added.

“I think it would help too if the police would act more like COVID police to kind of enforce the people who are supposed to be in quarantine and to enforce them to constantly be in quarantine because the police know and we don’t know and sometimes people come in the shop and only after they go someone would say ‘you know that person ain’t supposed to be round’ and we never knew so it things like that what’s causing the spread.”

Added to these concerns are the reported lack of medical resources on the island to handle the spike.

Inagua resident Jaycoda Major said the worsening COVID crisis on the island has made it difficult for non-COVID patients to get care and appealed for officials to send additional help to Inagua.

“The other concern that is really troubling for us is because in the last ten days almost every day the clinic is dealing with COVID patients so we have one doctor and three nurses on the island. That’s it,” Mr Major said. “So if you are sick and feeling unwell for some other reason you cannot even see a doctor because every single day, like last week for example you could only call and say I need my medicine refilled, but if you are feeling sick, you could not go unless it’s a life and death situation because almost every day there is either one or two COVID positive patients in there who they are trying to stabilize so they can get (them on a) flight so it’s a concern and not fair.”

“So, at minimum, the doctor’s need help and the clinic needs help because the rest of us need to see a doctor as well, but we also know there are more cases.”

According to the ministry’s latest COVID dashboard, Inagua has recorded 48 cases of COVID-19 since the start of the pandemic.

Two hundred and fifty-eight people there are fully vaccinated, while 474 have received at least one dose.

Each hour he's allowed to represent for the FNM party's Killarney constituency and everything like that will work against the party's struggle at discharging its responsibilities as Her Majesty's loyal and official opposition, — Yes?

You did. When you opened the country to homeporting and declared cavalierly that vaccinated persons could come in untested and "Party On!"

Why is anyone asking Dr Minnis' opinion an anything, seriously?

If his reasoning and logic were good he would still be PM.

Sir Dr. Minnis you are so missed for your insight, incisiveness, intellect and incomparability. It will just be a few more weeks before the current Prime Minister begins to stutter and flutter as the reigns of leadership overwhelm him. As we can see his approach is to say to everything it is six of one and a Half dozen of the other. He is speaking out of both sides of his mouth on every issue all the time. This is not what leadership is all about. You made the tough decision. We love you and we miss you. And we will see it come to pass when you are back to lead the nation. Please continue to lead the FNM. Those who were conned into voting against you should shut the bleep up when it comes to who will lead the FNM. We MISS YOU VERY MUCH. AND WE LOVE YOU.

... where is my vomit bucket when I need it?

You will now need a toilet to deal with the consequences of the Davis Maladministration. Prime Minister in waiting Dr. Minnis we miss you so much. We love you so much. You are such a blessing.

was it Inagua where the illegal Haitians were taken?

Could it be election?

As long as the disgraced Minnis remains leader of the opposition, both Minnis and the FNM party will continue to have absolutely zero credibility whenever they try voice an opinion on any political or other matter. Even the constituents of Killarney would have been much better off had th executive board and council of the FNM party not allowed Minnis to presumptiously annoint himself leader of the opposition. And this is why Culmer also needs to be removed from his lofty position within the FNM party.

What is causing all the family island spikes? The election partying and gatherings....no Haitians were held in Mayaguana or any of the other islands having a spike now.

WOW, all of a sudden Minnis cant stay out from the very media he shunned for over four years

Because it's always sweeter and easier being in opposition.......all you do is run around complaining about....and denouncing everything.......oh! .....and giving the wisest of advice. Ask Brave and Clint and Wayne

The election brought Covid to inagua PERIOD. Cases started poping up 5 or 6 days after the election. This whole situation showed how backwards the leaders of this country is. There is no reason what so ever to have people who are away from their island to come back and vote. In this day and age they should be able to vote right there in naussu and have their vote counted for whatever constituency they belong to. The ones running for those constituency have NO REASON to come here. given the situation, they should have set up camaras and monitors and have whatever presentation over the internet rather than a blasted rally that had people gathering like there ain't a pandemic going around. And the final nail in the coffin. from BEFORE the first cases popped up there were rumors that the one running for the plp for MICAL, a NATIVE of inagua had covid. They are now keeping it covered but the entire island knows it's true at this point. The VAST majority of covid caes were from the PLP camp. Even assuming this isn't true, the PLP failed inagua by not locking the island down after the first few cases. I am fed up with these people running this country, i will never vote again. FNM and PLP can burn in hell.