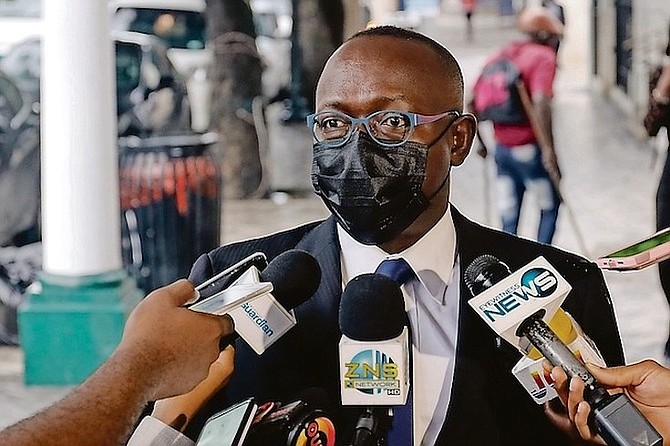 Mr Cooper told The Tribune yesterday that the Davis administration believes having beach access in The Bahamas is the right of all Bahamians. He said the government also respects the rights to private property.

In June, vendors who operate on Cabbage Beach protested after an access point to the beach was closed off and they found their property removed from the beach and stacked on the side of the road.

A company called Access Industries, the entity that owns the property, said the entry point to the beach was closed for safety purposes while clearing work for a condominium hotel is being done.

The access point in question, which vendors used to transport their wares on and off the beach, remains closed.

“My office has reached out to the presumptive owners and will meet with their representatives shortly,” Mr Cooper said yesterday. “Whilst we are respectful of private property rights, the Davis administration believes that beach access is a fundamental right of all Bahamians.

“We will take whatever steps necessary to ensure adequate beach access on every island of The Bahamas, including Paradise Island.”

When the vendors made the early morning discovery in June, they found that a fence had been erected overnight blocking the access point.

The irate vendors at the time said they were not advised of the beach’s closure by the developers of the private property which is located next to the entrance to the beach.

Then Minister of Tourism Dionisio D’Aguilar said he was “blindsided” by the move. The Minnis administration did not demand the beach be reopened.

Former Prime Minister Dr Hubert Minnis marched with protestors while he was in opposition in 2016 to remove a fence blocking the same access point.

During his last term in office, former Prime Minister Hubert Ingraham had fences erected by private homeowners to cordon off access to beaches torn down. Mr Ingraham said no Bahamian should be forbidden from going on any beach as no beach in the country was private.

The vendors took matters into their own hands in June and tore down a portion of the fence and accessed the beach. No one was arrested.

The company said in a statement in June that the condo-hotel project is expected to generate more than $250 million in economic activity and will include jobs in construction, tourism and related sectors, and will involve continued local participation featuring Bahamian workers, artisans and others, including in its restaurants and retail offerings to the public.

yes, well done. Open all beach access out west and out east also. The owners of nearby properties like to block beach access. Just put up columns and signs saying public beach access, so we can enjoy the beaches as well.

Are you listening to yourself??? Are you a home owner; or business owner; or a land owner??? How would you feel if your property were blocking access to a desired location only to have people breach your property to get there. I image that would certainly change your perspective.

While we hate to see access to our public beaches decline; please don’t blame the property owners. Instead, we need to place the burden of the blame squarely at the feet of our shortsighted, bewildered, idiotic government. Whenever it comes to beachfront property, matters pertaining to public access should be conducted before a sale is finalized. And what these lying politicians aren’t telling the general public is that many of these access issues have already been finalized and paid-for by the property owners! In other words, our governments SOLD our access to these public beaches. So think about that.

And what do you think about the corrupt real estate developers and other property owners who made generous payments at the 'right' time to the 'right' political party, politician and/or senior civil servant for the privilege of owning beach front property that they should never have been allowed to own and develop in the first place? As the saying goes, it takes two to tango when it comes to corruption. The only ones truly shortsighted, bewildered and idiotic are the Bahamian beachgoers who have for decades stood by and watched their beach access rights slowly disappear as a result of many under-the-table corrupt dealings of one kind or another.

tribannoy. please tell me what beach access rights you are referring to? Are these rights in the Bahamian constitution? The UN Declaraction of Human Rights? The Geneva Convention, perhaps? An invention of your mind? Tell me please.

Tribanon do you really think those residents in places like Lyford Cay, Old Fort Bay and even Albany would want stragglers coming near their vicinity especially with all the armed robberies and rapes taking place in the Nassau?

Those wealthy residents in Lyford Cay and Old Fort Bay would put up a fight if Lincoln Bain and his crew try to tear down their barriers blocking the beach.

Beach access CANNOT be sold. . .if anybody says that they bought an access way to a public beach. . .just take it to court and watch how fast they are told to "move they azz" from that space by the court!! Thats the whole matter at Cabbage Beach. . .public access is crown land. . .crown land CANNOT be sold!! Whomever allowed him/herself to be "swing" by the government. . .they just got swing!! And by the way. . .all beaches up to the "hgh water mark" are public lands. . .any Bahamian can occupy that land any time they wish to. I challenged that law/right with the Baha Mar managers!! The security asked me to leave the beach. . .I asked him if he lost his damn mind!! He said that if I don't leave "their" beach he will call the police.

"BE MY GUEST". . .I will sit right there until the police arrives. He left. . .returned after he "talked" with his boss as I asked him to do. . .while calling the police! " You must not come up on our grounds if you are not a guest". . .the managers told him he relied!!

Even though he could not tell me that "don't come on our ground unless you are a guest" is incorrect in law as well. . .I decided to "take the beach" and not give the poor man any more lessons in law!!! Conversly, I "gave the lesson" at Atlantis!! The security told me that I was not allowed to go into the marina if I am not guest. . .or he will call the police again!! And yes, I told him I will be in the marina when the police arrives. . .they can contact me there!!

Needless to say, I had a good walk around in the marina. . .no police came. . .no security approached me about being in "their" marina without being a guest of their place!

When I left they just "cut their eyes" at me and allowed me to "move freely" anywhere I wanted to go. . .not in any guest "living" areas mind you. . .as the law in the Bahamas allows!!

If any persons knows our laws, they will know where they can go or not!!

Peter Nygard thought he could "block public access way" also. . .we all know how that case turned out!! "Bouy get ya azz outta that space before I send ya tail to jail" was his court reply!!

In the case of beachfront private residential property, the owners of the property usually try take away your ability to park anywhere near the beach so that you must walk a country mile or more to get to 'their' beach. And when you get there, they have signs posted to remind you the portion of the beach above the high tide mark is their private property and that they will charge you with trespassing if you step on to their property. Some of these private residential property owners even have hidden video surveillance systems to help them win their court case if they do decide to charge you with trespassing.

The depatment of land and surveys has the GIS maps that can tell you where all public access ways are located!! Land owners can take a person to court if their private land do not include a public access way!! But I will not advise any one of them to carry any serious activists to court. . .or they can have one "helleva" big beach party on "their beach" every night for the next 5 years!! Take one of us to court for "walking" on ya lil piece of land. . .then we can really show their "triffiling" tail what right-to-access looks like for the Bahamian people!! It can be D-Day landing on "their" beach!! Party them outta house and home!!! They will have to give access or be forever known as "the house with a big beach party every night"!! Hehehehehehe!!

I am all for public beach access, but last weekend I went to Love Beach beach through a recently restored public beach access and there were piles of trash at the entrance, the pathway was littered with trash and the beach was the same. It was awful.

Once it is a public access way. . .call into MOW. . .I think. . .and they will come down and take the trash away!! Or move it yaself and bill the "blocker" for the costs to remove he/her rubbish!

If they can't get it right I guess we'll have to stop selling any beachfront property. No-Access Industries would have ruined it for all.

Some of them are good owners. . .they provided well maitained public access-way for years!! Then others like one "pain-in-the-rump" owner on Adlaide Village beach who has been making a donkey rear end of himself for many years as well!! Absolutly right. . .IT IS CALLED A RIGHT-OF-WAY!!