I ran for my country - only to be left behind 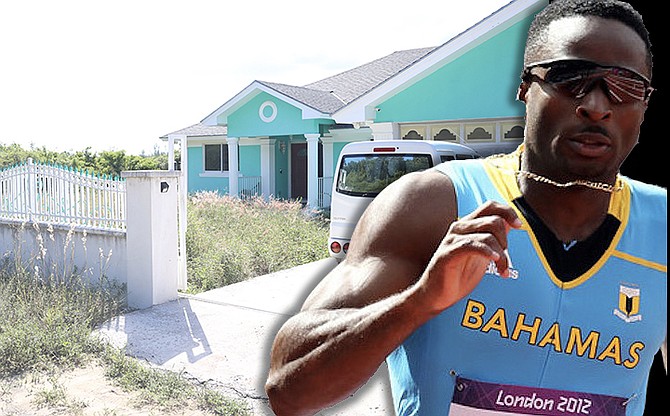 Ramon Miller running in London in 2012, right, and the house he built on land gifted by the government. House photo: Racardo Thomas/Tribune Staff

OLYMPIC gold medalist Ramon Miller says he feels unwanted by his own country following a years-long battle to gain infrastructure for his home that was built on land gifted by the government.

The 2,600 square foot home on a rugged dirt road is perched on a 20,000 sq ft piece of land tucked away in acres of thick vegetation off a paved Tropical Gardens road.

Mr Miller ran the anchor leg for The Bahamas’ 4x400 metre relay team at London in 2012, a race that brought home gold. He was given the property in 2014. Mr Miller said he was elated to receive the sprawling property to build a dream home for his wife and children.

Despite following all of the correct procedures and seeking to have lamp poles for electricity and water infrastructure placed, Mr Miller said there has been “roadblock after roadblock”.

He said he was also in contact with former Works Minister Desmond Bannister.

He also questioned both the Water and Sewerage Corporation and Bahamas Power and Light to have utilities put in place.

Due to this dilemma, he has had to have a water well installed and continuously runs a diesel generator at a cost of $250 per week.

It is a sacrifice he says he makes so that his children can do their assignments, and everyone is comfortable. 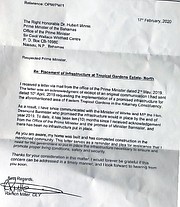 “Who doesn’t want to put their family in their dream home and, of course, utilising the gift that the government gave and go for it. Of course, I could have ventured off and bought a home, but I wanted to show the Bahamian people that I appreciated the gift that they gave me and building something here, it showed that, hey, I am making my statement here.”

Initially the process was smooth sailing and at no point in time did anyone reveal there could be issues getting the needed infrastructure put in place. Mr Miller said there are homes with water and light about 200 feet away from his house.

“No one said anything of that sort. I got the permit and started the building process. I built the foundation, and nobody ever came to me and said ‘I don’t think that is a good idea to build back there because it may be hard or difficult.’ But I am thinking why it should be hard or difficult if this is a gift from The Bahamas.”

He continued through to completion hoping it would motivate officials to do what was needed.

“But it has been roadblock after roadblock, and I have tried every avenue.

“I even told them I would pay for the lamp posts and go away and see if I could bring them in instead of running a generator all the time because it’s costly.

“I was willing to foot the cost as best as possible, but like I said roadblock after roadblock.”

Recently, his main sizable generator is out of service because it needs a part, so the family has resorted to using a smaller one.

The situation has left him dejected.

“It doesn’t make me feel good,” he said. “I must say. Neither do I feel wanted or appreciated even though I want to pay for it,” Mr Miller said.

When contacted for comment, Dr Minnis told this newspaper that a contract “was approved for infrastructure” to Mr Miller’s area.

However, it is unclear why the infrastructure has not yet been put in place.

Attempts to secure comments from other officials were fruitless yesterday.

I looked at my crystal ball and saw the young professional subdivision.

Well, these thing happen. I remember when my mother built our house in an undeveloped area on new Providence. we had the same issue. BEC , at the time, told her that the area was not under consideration at the time of construction. BEC told her to buy a transformer for the electricity, and she would be reimbursed when people move in. Well, as you can imagine, that never happened. She never got reimbursed. It is what it is.

There is generally a time limit for reimbursement for poles and transformers. I had the same issue and the neighbours came after the expiration of the time line. I also had to wait on paved roads but since I chose to build at that time I had to accept the additional costs.

This should not happen. If you gift land give clear indication of when you plan to put in infrastructure for that land or make it clear what costs the grantee will have to undertake to build on that land.

Welcome to the life of a Bahamian in his own country, but there is hope; ask one of your "white and foreign" friends to act on your behalf (with a bit of tip on the side) and watch how fast you can get things done in the Bahamas - yes, we are still privileged to serve "white and foreign" while killing the dreams of our brothers. IF it's any comfort, where I live, we waited two years (and a change of Government) to have the street lights repaired, and this is the same neighbourhood where former Works Minister Desmond Bannister lives.

Stop talking bullshit. You have been independant for over 25 years with your own predominantly black government. Stop blaming others, white / black Bahamians, Brits, Americans and uncle tom cobbly for your own failures. Year after year people like you blame it on racist lies, mind you more than happy to get help from forieners for aid with vaccines, hurricane assistance, stadiums etc etc

Typical fool, whose head is buried deep up his backside; the Bahamas as a culture has dishonoured and disrespected Bahamians or anything Bahamian for as long as I can remember. If not Smokie 007, Elisha Obed (may he rest in peace) was a Bahamian light middleweight boxer. He is the Bahamas only world champion in boxing, and what we did to him is the same neglect and disrespect that continues.

Bahamians are no different from the other Black communities where some see no wrong when our brother is being ill-treated, neglected, or outright disrespected and taken advantage of. We never know the evil, the prejudice and the cultural grudge that defines us and deprives us.

So if you are offended by my truth, then I can only say you must be of the very few who have no eyes to see that we live in a society of privilege, where the colour of your skin can determine if you eat and do not eat; if some of us receive service or don't receive assistance, but sir/madam step from your painted glass and open your eyes and see.

Silly comment considering the Bahamas is littered with failed ventures of "white and foreign" investors who were unable to get utilities or the necessary approvals or saw their money or assets stolen at some point in the process or even ended up being murdered, as is the case with Hywel Jones.

Hmmm..is this the guy who was shot by someone on a motorcycle? Thats the only case I can remember of a businessman being killed out west. The gym owner killed on Montagu was also in a dispute with business partners

"2009, offshore businessman Hywel Jones was shot and killed outside his office in the Bahamas. At the time, he was involved in a dispute with his former business partner, Lester Turnquest, whom Jones had accused in a civil lawsuit of defrauding $20 million from a Canadian client. In the months preceding his death, Jones had been viciously assaulted by intruders at his home, with the evidence indicating that a Bahamas policeman was involved. Three years later, no-one has been convicted in connection with the murder and although Turnquest was arrested - and released - in late 2009 in connection with the alleged $20 million fraud, he has not been charged with any crime."

I though Desmond Bannister resides ok somewhere off Carmichael Road.🤔

Yet the vast majority of the eligible voters come election time continue to support the two-party political system that has brought our country to its knees.

If most Bahamians don't know by now that the corrupt and incompetent leadership and administrative apparatus of the PLP party and the FNM party are essentially one and the same, i.e. no real difference from each other, then they will never know and, accordingly, be made to suffer for their stupidity.

This isn't right. How did he get his plans approved without subdivision approval. Perhsps a Shoddy architect or contractor paid someone under the table to bypass the approvals required before building?5

There is nothing untoward with this man's efforts to complete his home for his family. All of his processes and procedures and his communications with the two "top offices" in the country are laid out clearly for all to see. It's a simple case of bad service that has decayed this country, and where there is a lack of accountability; you find chaos; in a country where a D Grade is the accepted standard, what more do you expect.

with a house that size maybe now he should look towards solar power. he has enough roof space to put in a system that can run his appliances and a water pump and can add on battery storage as needed. Many had the experience of having to pay BPL for underground cable or light poles. They bill you for them, then in a few months you see five and six other homes connected to the same pole. Then BPL says 'since you were the first one requiring electricity, you have to bear the full cost of the infrastructure. ' Sometimes they suggest you get other residents to reimburse you for the poles but you find out someone from BPL has already made a deal with them which includes, :getting ya power connected right away.' Bite the bullet and try solar for now.

Run for politics next tine, not for your country, but either for the FNM or PLP, you won't lose

Based on statistics and history, the FNM will win the next election