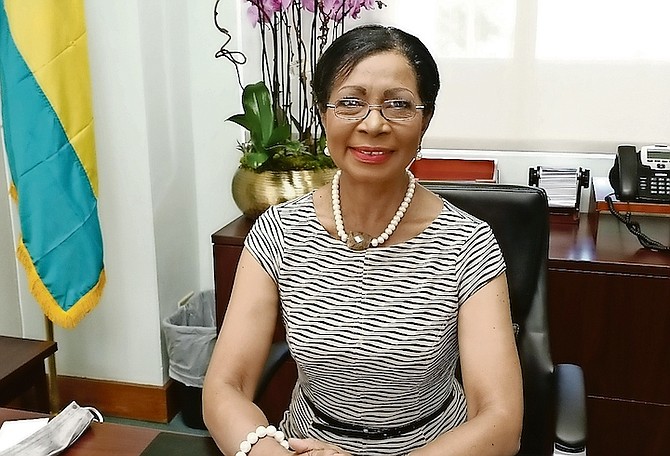 Ann Marie Davis in the Office of the Spouse. Photo: Ulric Woodside/BIS

AFTER receiving advice from technical experts in the Ministry of Foreign Affairs, the Prime Minister’s wife Ann Marie Davis decided to keep the Office of the Spouse active despite previously questioning its purpose.

Press Secretary Clint Watson acknowledged yesterday that initially Mrs Davis questioned the office when it was first formed during the Minnis administration. At the time of her criticism, she did not yet have an opportunity to see its functions, he said.

He said Mrs Davis is now eager to use the Office of the Spouse to continue her work with gender-based issues and work with young women.

“I talked to the first lady last night because I wanted to find out what is it that you want to do,” Mr Watson said yesterday in response to a question about Mrs Davis assuming the role, but previously questioning its necessity in 2018 after former Prime Minister Dr Hubert Minnis introduced it. His wife, Patricia Minnis, executed the duties of the office.

“She talked about being able to want to work on gender-based issues working with women, young women. Helping to discover purpose for them to be able to execute mandates and have a greater voice and participation in the country. That’s something that’s dear to her.”

He continued: “Now, here’s what happens and I believe this is important to say. A lot of the comments that were attributed to Mrs Davis obviously Mrs Davis made when she had just seen this office formed so the question was what is the purpose of this office.

“When you have an opportunity to see what this office does and see what it’s doing around the region because there are spouses around the region who have all joined arms and said ‘let’s make sure these offices are actually in place.’ It serves a purpose.

“Mrs Davis has been very active and very busy before this office doing this kind of work, so this office really offers support to what has been established.”

Mrs Davis recently made a courtesy call with Minister of Foreign Affairs Fred Mitchell and other officials of the ministry. The Office of the Spouse falls under Mr Mitchell’s purview.

“She’s been offered advice by the technical experts at foreign affairs that she should keep the office and after talking with them on a courtesy call and hearing the advantages that can come out of that office and fulfilment she decided ‘well then OK let’s go ahead with it’ but it was based on the advice of the technical experts at foreign affairs who said we believe it’s a good thing. It’s working well around the region,” Mr Watson said.

“…It just goes to show that sometimes when you’re not sure of something or you may have a certain perception when you get advice you take the advice, and you recognise that you can maximise it and that’s what she has done, and she is looking forward to being more effective using the office.

“It’s not a paid job. There are finances allocated to it for the operations of the office but she doesn’t get paid to do it. But she’s happy to work through it and to get some initiatives done.”

Shortly after the office was set up under the Minnis administration in 2018, Mrs Davis told The Nassau Guardian that she was not convinced that there needed to be an Office of the Spouse.

“I have been very involved in charities, and the extent of the involvement is very far-reaching, and I haven’t yet seen the need to have an office to carry out those functions,” she said at the time.

“Having said that, I don’t know … how the role of that office that Mrs Minnis is referring to, how that role would be defined [and] whether it will be a crossover to social services because some of what Mrs Minnis said is what I know social services to be involved with,” she said at the time.

Yesterday, former Foreign Affairs Minister Darren Henfield said when the former Minnis administration determined to establish the office in 2018, it did so with a view of availing Mrs Minnis with a formal platform from which to work with her CARICOM counterparts.

“Our decision followed the earlier establishment of SCLAN (Spouses of Caribbean Leaders Action Network) whose objective was to treat the issues surrounding the health and wellbeing of women, adolescents and children in the region, among other things,” he said when contacted yesterday.

“As I said then, I say again now, I was shocked at the amount of criticisms levied at the office, especially since Mrs Minnis was volunteering her services free of charge.

“It is my view that the current government’s embrace of the office – at least in my mind validates our decision to establish the office in the first place.

“We wish Mrs Davis well in this role.”

SEVENTY TIMES SEVEN I will forgive the PLP. The FNM seven if they are lucky.

I can not see the necessity for the office of a spouse. If it was wrong for the FNM it can not be right for the PLP.

She got a sniff of power from all the drama of the Bahamar opening of Parliament, the international travelling, and the adulation of her base.....now she wants bigger sniffs.

I doubt it. How long have she and Davis been married? For as long as I can recall, he's always moved in the top circles of the country and he's been DPM before. But I do think its a job that could go to someone for what will amount to PR and duplicated efforts

She will do well. She is a lady of class. Reminds me of Lady Pindling. The other one... not so much. She had us all thinking it was her idea and sparked alot of controversy by seeming to have created an office for herself instead of just saying it was mandated by CARICOM.

Meanwhile our children eat Ramen Noodles, and we pay rent instead of living free on Crown land we were supposed to get in 1973.

A classic case of speaking on something you know nothing about. Mrs. Davis should be ashamed, as educated as she is purported to be, she should have done research on the office before making condemning comments. But as usual everything is politically motivated in this country, and she made her initial comments in an effort to belittle what Mrs. Minnis was doing without having done any research. Now that's she's in the position, suddenly she can see the use of having the office "based on technical advice". Smdh...we really need to stop this kind of bullcrap in this country. Stop tearing down things just because it's not your idea, or not from your political party.

Minnis should never have introduced the so called Office of the Spouse. Such displays of decadence by the political elite are nothing but a most cruel and wicked joke given the large number of malnourished and hungry children we have in our country today.

Amazing how people change their talk when they seeming have the seat of power. If the office was so not needed when she criticized it when it was formed, why is she doing it?

People who lack integrity are never good to be in positions of power. For me she has lost all credibility.

She said there are finances allocated to it for the operations of the office but she doesn’t get paid to do it.

And why doesn't she or The Tribune tell us how much was actually expended on the Office of the Spouse during the 4 or so years Minnis was PM and how much will now be budgeted to this ridiculous Office now that Davis is PM?

Does Khrisna Russell have any inkling why good investigative journalism is so important, or is she simply not paid enough by The Tribune to bother gathering the kind of information most readers would be interested in knowing?

Kml.... they don't know what investigative journalism is here in The Bahamas. Just half arsed articles that lead to nowhere.