Ingraham: My Advice Was Not Wanted 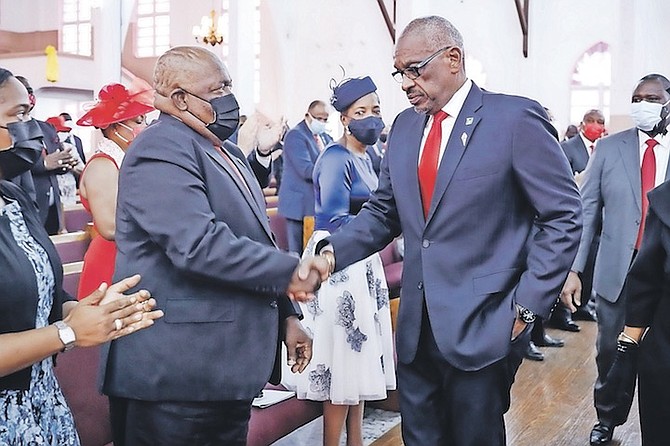 FORMER Prime Minister Hubert Ingraham said he did not feel like his advice was wanted or appreciated by the Free National Movement for the past several years.

“I have not been active in the last five years or more because I did not feel that my advice or counsel was appreciated, wanted or needed,” Mr Ingraham told reporters on Friday after viewing the body of former Senator J Barrie Farrington in the foyer of the Senate.

“And so I did not avail myself of any opportunity to get in the way of anyone.”

Mr Ingraham stepped down as FNM leader in 2012 after his party’s defeat at the polls.

Their relationship was said to be strained over the years and at one point in 2012, Dr Minnis declared that the Ingraham era was over.

At an event in 2018, former Prime Minister Perry Christie suggested that Dr Minnis did not speak to Mr Ingraham, prompting the Killarney MP to give an impromptu defence of his relationship with the country’s former leader.

“Perry, if there’s one thing I’ve learned from you, you always said, ‘the man who speaks last has the greater advantage,’” Dr Minnis said at a party celebrating the birthday of Sir Arthur Foulkes in 2018.

“So let me clear the record now. Ingraham and I have always been friends; we’ve always loved each other and that won’t change. Throughout our years we’ve always learned to agree to disagree. Our relationship is so tight that we even share the same name Hubert Alexander. . .”

In 2019 after Hurricane Dorian, both Mr Christie and Mr Ingraham said they were willing to assist the government however they could with restoration efforts, but were sceptical about whether Dr Minnis, who was prime minister at the time, would give them the opportunity to take an active role in the process.

During the recent election campaign, Mr Ingraham did not endorse Dr Minnis.

Whoever took that picture really caught it at an interesting moment! Wow!

Just will be careful how much I read into it without seeing the before and after monents.

No worry, notice the in focus Tabernacle's ever watchful on duty security guard, a stout man who wore his blue employer issued suit with pride was at his ready to pounces 'get them apart' and everything like this and that but don't asks me explain the wearing red Tie. — Yes?

We all came to learn the hard way that the outrageous rules and protocols that he so vindictively inflicted on us as Supreme Ruler never really applied to him.

Minnis may not have gelled with Ingraham as the former PM would have liked, but Ingraham made mistakes as well in how he forsook the FNM in 2012 and left it for dead, then backed LBT vs Minnis. Minnis had a right to be distrustful of Ingraham after 2017.

Right you are. Sore loser Ingraham back then just picked up all of his marbles and went home whining with his little tail dangling between his legs. Yup, Ingraham created the vacuum that allowed monster Minnis to take full control of the FNM party.

Hubert Ingraham's love of his Haitian blood over the love of his adopted country was his biggest downfall.

When questioned what his solution was for the Haitian problem, Ingrahams' response that "Bahamians should learn Creol" and his trying to implement Creol as a required language in schools sealed his fate!

Ingraham did more to damage the Bahamas single-handedly than any pm. He will always be viewed as a traitor by many Bahamians.

If HI could ever "take a back seat" to anybody. . .yes seek his help!! I remember the: "I'se a one man band" statement after HI was "becoming" a "has been" as Doc said!!

If a picture paints a thousand words..this would say. "Oh how the mighty have fallen!'

HAM looks so.dejected. Most humble I've ever seen him compared to a few months back where he was telling the media off and carrying on like he was king of the hill.

Let this be a lesson to all who aspire for high office. In politics you get no do overs. You get a chance. Use it to do something good. This man had an opportunity but he got heady and squandered it. It's hard to feel sorry for him.

That is true. . .it is hard to feel sorry for him. In fact, let us pay little attention to his plight right now!! We have a government to "set stright". . .the FNM had the crown. . .they "dissed" the masses. . .the masses rejected them. . .end of story!!

The two of them riding off into the sunset would bode well for the Bahamas. There isn't a room large enough for the combined arrogance displayed during their respective terms.

The only advice Papa could offer our beloved leader Dr. Minnis , who will be returning as PM, is where to buy potato chips and junk food in bulk. Just look at Papa . He does not stack up nicely against our Prime Minister in any way, shape or form. History will show that Prime Minister Minnis was the best Prime Minister the Bahamas ever had. There is no one else who could compare to him on any dimension of leadership . The rest were all physical and intellectual MIDGETS.

If he was the best, why was he soundly rejected by the same people that overwhelmingly made him pm? Something doesn't add up with your support of Minnis.

He was not rejected.

The real question is how long before the first plp is charged with corruption and which one will it be this time ...