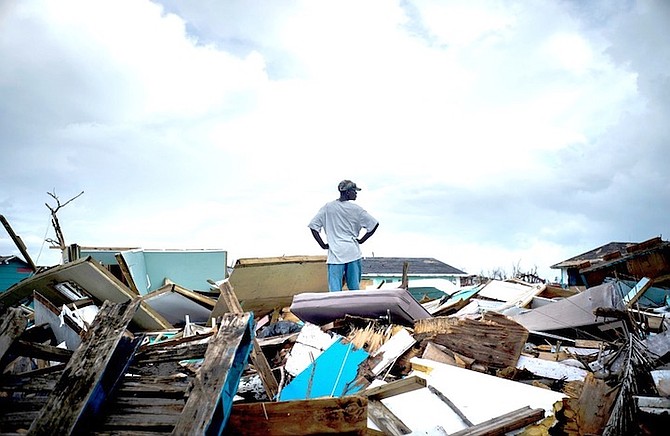 Damage in Abaco after Hurricane Dorian in 2019. Photo: Ramon Espinosa/AP

• Island closes down for Dorian memorial

Abaco’s Chamber of Commerce president yesterday pleaded with the next administration to make rebuilding its sea port an “absolute priority” as the island closes down today to remember Dorian’s victims.

Ken Hutton, speaking as Abaco marks the second anniversary of the catastrophic Category Five storm’s landfall, told Tribune Business that only government offices and banks will be open on the island today as residents stage a memorial to commemorate those who lose their lives and the trauma all suffered.

“Abaco is closed tomorrow [today],” he confirmed to this newspaper. “All the private sector got together and are closing. The whole community came together and decided that no one is working. The only people that will be open are government buildings and the banks.

“We will remember everyone not here with us, and remember what we went through. It’s a memorial. There are two to three services, two to three events, that are planned for it. A couple of community events.”

With the subsequent COVID-19 pandemic, and associated lockdowns, restrictions and infection outbreaks, further delaying reconstruction and rebuilding efforts, Mr Hutton urged the Government - and especially the administration that is elected to office on September 16 - to fully commit to seeing Abaco’s rebuilding through to completion.

And he warned that key infrastructure assets vital to the revival of Abaco’s economy remain in need of urgent attention, with Marsh Harbour’s sea port “lifeline” still largely in its original post-Dorian state of disrepair and the Leonard Thompson International Airport suffering from broken down generators and air conditioning units.

While the latter asset has been included in the Government’s private-public partnership (PPP) initiative to upgrade Family Island airports, Mr Hutton said: “We just need the Government committed to allowing Abaco to rebuild.

“We need the port rebuilt, which has been going on for two years, and we need the airport put back in shape. The generator is not operational, and the A/C is not operational. Marsh Harbour is basically the same. All we’ve done is put up a fence and clean up the garbage. That’s where we stand.”

Mr Hutton estimated that communities such as Dundas Town and Murphy Town were around 50 percent rebuilt, but added: “That’s not where we should be at this point. The downtown [Marsh Harbour] core has progressed significantly over the last couple of months, and is probably at 50-60 percent. There’s a lot more progress, with people rebuilding and reconstructing.”

The Chamber chief, though, said his concerns over Marsh Harbour’s Dorian-battered sea port have not lessened. Unless this is addressed urgently, the port’s ongoing post-hurricane waiver from having to comply with global maritime security standards implemented after the September 11, 2001, terror attacks could be in jeopardy.

If the present exemption from the International Shipping and Port Security (ISPS) standard is discontinued, it would result in vessels bringing in reconstruction and daily supplies to Abaco being unable to return directly to the US.

Such a development would force these cargo vessels to instead offload their goods in Nassau or Freeport rather than Abaco, resulting in increased costs and extra time to get vital products to homeowners and businesses still rebuilding their Dorian-ravaged properties, thus stalling the reconstruction efforts.

“The Marsh Harbour port is even more critical [than the airport] in the opinion of the business community because that is our lifeline,” Mr Hutton told Tribune Business. “I’m at the port every day, and nothing has been done since July. We’re very concerned.

“The solutions are there, the solutions have been submitted. Solutions are on the table that have been provided to solve this particular problem. Whoever takes charge after the election, this needs to be an absolute priority of the Government. The Abaco Chamber is willing to help in any way.”

Acknowledging that the COVID-19 pandemic has been “a tremendous hindrance” to post-Dorian reconstruction, Mr Hutton said he was sticking to his previous estimate that a further five years is required to complete Abaco’s recovery “assuming eventually, or sooner rather than later, we get away from this virus”.

And the Chamber chief again urged the Government to enact existing VAT relief and other Dorian-related tax breaks for the long-term beyond their year-end expiry, arguing that this would spur greater confidence and investment by both businesses and homeowners.

“It’s hard to make long-term plans on a six-month basis,” Mr Hutton told Tribune Business. “When the storm first happened we were told a three-year programme would be put in place, but then when COVID-19 hit it turned into a rolling series of three to six-month extensions.

“To encourage investment and rebuilding there needs to be a longer window. You cannot get anything done in six months. We need the certainty of another three years minimum. Assuming that can happen, the revenues generated by Abaco will more than make up for any kind of concessions given in the short-term.”

Roscoe Thompson, chief councillor of the Marsh Harbour, Spring City and Dundas Town town council, told Tribune Business that reconstruction efforts had been hindered by a combination of COVID-19 and the Government’s fiscal woes although many persons “don’t want to hear that”.

“It’s moving, I guess, but not as quickly as everybody would like,” Mr Thompson said of reconstruction. “Many people don’t realise the Government doesn’t have the money. That’s honest to God. There’s areas where money could have been spent better, and the domes dealt with in a different manner.

“Businesses are slowly coming back. I don’t know how much effect COVID-19 has had, but the businesses don’t have anywhere to rent. The owners of some little plazas have not built back, and that can be spaces for between 10-12 businesses. You’re between a rock and a hard place.”