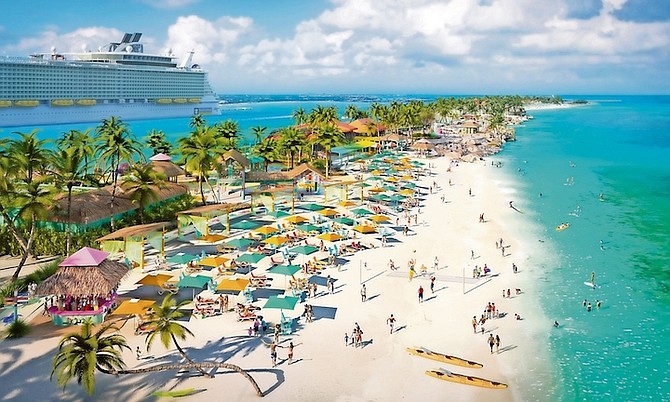 Royal Caribbean has pushed back the construction completion date for its $50m Paradise Island project to May 2023 even though no phasing is involved, its Environmental Impact Assessment (EIA) reveals.

The document, published ahead of the September 8 virtual public consultation on the cruise giant’s plans, says it hopes to start construction next month - a timeline that may now be regarded as optimistic given the permits and approvals that are still required.

“Royal Caribbean proposes to commence construction in relation to the proposed project in October 2021. It is anticipated that the construction will be completed by May 2023,” the EIA, prepared by Bahamian firm, Islands By Design, states.

Royal Caribbean had previously hoped to begin construction on the Royal Beach Club, which will be located on Paradise Island’s western end near the Colonial Beach area, in July 2021 so that it would be able to receive guests by January 2023 and catch what is anticipated to be the peak of the post-COVID rebound. Those dates have now seemingly been adjusted.

“As Royal Caribbean Group is keen to improve the overall experience of cruise passengers, the proposed project will transform underutilised parcels of land into a productive economic and social hub for cruise passengers and Bahamians,” the EIA added.

“The proposed project is an opportunity for Royal Caribbean and the Government of The Bahamas to foster a mutually beneficial long-term public-private partnership in Nassau. The proposed project will include the development of Paradise Beach and Colonial Beach to create an arrivals area, family zone, water sports centre, food and beverage services, and swimming pool and back of house areas in support of a world class beach experience.”

“It is anticipated that with the payment of an entrance fee, the experience will include access to the Royal Beach Club, lunch and the rental of a beach chair. For an additional fee, guests will be able  to purchase alcohol and sodas, a cabana, day bed, clamshell, and participate in watersports and local tours,” it continued.

“There will be an array of activities available to guests, including but not limited to snorkeling, scuba diving, kayaking, jet skiing, floating mat rentals, inflatable water slides, parasailing, nature hikes, volleyball and other sand and water-related activities.

“While the location is inherently beautiful, Royal Caribbean will also ensure that additional landscaping is planted throughout the site. As Paradise Island is close to the Nassau Port, guests will have direct and quick access to the harbour via water taxis. The construction of the water taxi harbour and dock may include dredging, seawalls, wave attenuators, docks and fixtures.”

The EIA said Royal Beach Club’s “available occupancy” could accommodate 8,719 guests, although maximum capacity is being set at 3,500 together with 250 workers. The project will install its own wastewater treatment plant capable of handling 11,000 gallons per day, along with a 150,000 gallon reverse osmosis plant and two 500 kilowatt transformers from Bahamas Power & Light (BPL).

Concerns have been voiced previously that the Royal Beach Club will merely suck thousands of passengers and their spending away from Bahamian merchants and other vendors on Bay Street and in downtown Nassau, further fuelling the area’s decline and deterioration of locally-owned businesses.

However, Russell Benford, Royal Caribbean’s vice-president of government relations for the Americas, previously told Tribune Business that the Royal Beach Club will be the key “stimulus” that drives the tripling of passengers brought to The Bahamas by Royal Caribbean over the next decade to 2030.

“It’s incredibly important. It’s the stimulus for the growth; to go from 2m passengers a year to 6m a year is because of that Royal Beach Club,” he said.

“It’s incredibly important to us to provide a magnet or anchor for development. People, when they see this experience, will want to book cruises.... It attracts more and more people to The Bahamas because we will have a signature, iconic experience that enhances The Bahamas’ experience. We will market that to our database.

Mr Benford argued that the Royal Beach Club would only be able to accommodate just over one-third of the up to 15,000 passengers it can bring to Nassau on any one day because its capacity is being capped at 3,500 persons.

“Not as many guests disembark the ship as we’d like, and the Royal Beach Club will be a good catalyst for them to disembark the ship.” And, with passengers being ferried to the project from Prince George Wharf, Mr Benford said there was an opportunity to develop a water taxi system that could later transport them to the Arawak Cay Fish Fry or back to downtown Nassau.

“This is what the project has the ability to do: Maximise the opportunity,” he told Tribune Business. “Royal Beach Club is the nexus point of increased customer spend; that $1bn increase in spending and economic impact. Bahamians have the opportunity to take advantage of this massive economic impact to come, and it has the ability to be transformational.

“The Paradise Island project will double the number of Royal Caribbean visitors to Nassau, and we would be thrilled to partner with downtown business operators, merchants, restaurants, tours to sit around the table and figure out ways to create opportunities.

“Bringing millions of people to the business owner’s doorstep is not a bad thing. We need to figure out how to connect those businesses. If we can remove barriers and market those businesses directly to our guests, let’s sit down and figure out multiple ways to do that.”

Hard to imagine a more poorly thought out and badly conceived idea. This will destroy downtown Nassau, ruin the delicate environment of that part of PI and infest the Bahamas with cheap, infected boorish tourists that we could do without. Not to mention the gangs of out of control jet ski thugs will have a field day beating, raping and selling illegal drugs to unsuspecting cruise ship tourists. Should be entertaining to watch what a train wreck this will undoubtedly be

I wouldn't say unsuspecting cruise ship tourists. Theres enough warnings, that they just choose to ignore most of the time (and yes there will be a few who are unsuspecting).

The Government should force Royal Caribbean to sell a percentage of its shares to Bahamians VIA an IPO by stipulating it in the heads of agreement.This developement along with CoCo cay will be the second time Bahamian land is leased to Royal Caribbean. Spread the wealth.

This is a disgustingly terrible idea.

This is so Gross. IF Minnis thinks this is paradise, he has to go. TERRIBLE.