ON the two-year anniversary of Hurricane Dorian’s landfall in the country yesterday, government officials as well as members of the official opposition remembered those who lost their lives.

Meanwhile, Pakesia Parker Edgecombe, minister of state for disaster preparedness, management and reconstruction in the Office of the Prime Minister, attended a remembrance ceremony in Abaco.

PLP leader Philip “Brave” Davis also travelled to Abaco for the ceremony while the party’s deputy leader Chester Cooper, and his wife, Cecille, travelled to Freeport and laid a wreath at the monument site at the foot of the Jack Hayward Bridge at Grand Bahama Highway. 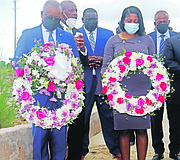 Dorian hit Abaco on September 1, 2019, flattening homes, buildings and taking lives before moving to Grand Bahama the next day where it left more devastation and death.

The current death toll stands at 74 people, with 63 from Abaco and 11 from Grand Bahama, however many more remain missing.

Mr Thompson said Bahamians throughout the country would never forget the tragic events of September 1.

He said as he made his way through East Grand Bahama, stories of survival and strength were common, demonstrating the resilience of Bahamians.

“As we remember and pray for those we lost, we also pull on the encouragement of those that continue to survive,” he said.

“Our hearts go out to all of those persons affected, not just on this day. We continue to assist persons who have been affected by Hurricane Dorian. And today, we wanted to publicly say to the island of Grand Bahama, to all persons affected, that our hearts, thoughts, and minds are still with you; that we stand with you, we remember those lost, and we will continue to be with them through this entire process.”

Mr Thompson assured residents that the government is committed to the reconstruction and rebuilding efforts on both islands.

“While a lot of work has been done during reconstruction, there is still a lot more to be done. And it motivates me and my colleagues to continue the rebuilding efforts,” he said.

Agriculture Minister Michael Pintard, a survivor of Dorian, said even after two years, what he had experienced in his home with his family is still surreal.

“I went in the upstairs section of my home, and it was surreal looking at the areas where my family and I spent time and just thinking about how difficult the last two years have been for so many in Grand Bahama,” he said.

“While we can now go in the home we enjoyed for years, many families today are still in the rebuilding process. We know that many have recovered and rebuilt their homes, but there are still residents doing so. I join with my colleagues in reaffirming our commitment to continue to help every single family in GB and Abaco, to rebuild community by community.”

He commended those Bahamian volunteers, particularly the faith-based organisations who brought their international partners to assist in the relief and rebuilding on both islands.

In a statement issued on Wednesday, Mr Davis said his party is “inspired by the indomitable spirit of the people of Abaco and Grand Bahama.”

“As we mark this deadly and destructive anniversary, our thoughts and prayers are ever glued with those who are still mourning the dead and others seemingly hopelessly seeking closure on the status of their missing loved ones,” Mr Davis said.

“Today, 1 September, we commemorate the lives lost and the devastating circumstances caused by Hurricane Dorian two years ago. The catastrophic Category 5 storm hit Abaco and then Grand Bahama, leaving both northern islands in the worst state during our nation’s modern history. Sadly, thousands of Abaco and Grand Bahama residents remain homeless, jobless, in search of supplies, and crying out to the government for meaningful support.”

At the monument site in Grand Bahama, Mr Cooper and several persons gathered at 10.30am to lay a wreath in remembrance of the victims.

“We wanted to temporarily suspend our campaign and send a strong signal to families that our hearts go out to them at this difficult time,” he said.

Why is Mr.Davis looking so unfit and unkempt. Is this someone who is fit to lead the nation? Clearly this cannot be the case. He is unmasked.