The Kdk Report: In Sickness And In Health

THE universal thread that connects each and every human being is the need to be heard, wanted, trusted and appreciated. Many people search their entire lives to find their proverbial soulmate - that one true love who makes them feel safe and wanted. Young girls start planning their wedding long before they even have a mate. They picture the day in their head, the dress, their loved ones cheering them on. On that day they’re a real-life princess and it’s the reason the wedding industry is a multi-billion-dollar market, raking in over $55 billion annually in the US alone. But not all fairytales end in happily ever after and few marriages endure without challenges. 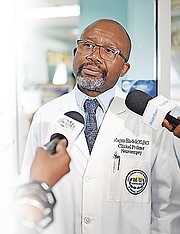 I first met the patient described in this week’s report in August 2017. He was referred by his family doctor for a diabetic foot evaluation and treatment of numbness in both feet. At the time his blood sugar measured 304mg/dl (normal range for diabetics over age 20 is 70 to 130mg/ dl before a meal and less than 180mg/dl one-two hours after a meal). He was retired, had diabetes for 20+ years and was insulin dependent. His past surgical history was significant for a knee tendon repair, he had no drug allergies and at 62-years of age he was otherwise very healthy. He was prescribed therapy and oral medication and eventually his symptoms resolved.

Four years later, however, he returned to the office for treatment of a large midfoot ulceration. The wound was infected but there was no bone involvement, determined via X-ray analysis. The patient was nonetheless referred to the hospital for blood work and IV antibiotics because he reported a recent history of night sweats, chills and fever so sepsis (symptomatic of infection) was suspected. He unfortunately checked himself out of the hospital shortly thereafter against medical advice because he felt like he was being neglected. A few days later, while at home, he was found by a neighbour lying on the floor having suffered an ischemic stroke. From that point until today, his ex-wife has been by his side, assuming responsibility for his care.

The two fell in love in the early 80s and were sure they would be together forever from their first date at a local popular restaurant. They married shortly after she got pregnant with their only child, a daughter. Sadly, when he should have been the happiest in his life, the man became verbally abusive and the couple divorced after she found out about his extramarital affairs and the multiple children borne of his indiscretions.

They were estranged for many years but for the sake of their daughter she ultimately decided to make peace with what had happened and their relationship became more amicable. After his stroke, with no other family around to provide the care he needed, he was threatened with the prospect of being placed in a government care facility. The patient’s mental health suffered and the stress caused his blood sugar and pressure levels to become critically elevated. Unable to walk, bathe or feed himself, his ex-wife stepped in and paid for him to have a nurse.

It was gut-wrenching to see him go from one day walking without issue to the following day having to be lifted out of the car and into a wheelchair; unable to speak or stop expectorate from dribbling down the side of his mouth. Regular attendance with his therapist and primary physician, however, allowed him to regain strength on his left affected side. Within two months his speech became audible and clear and he was walking without assistance. Now every time I see his ex-wife, tending to my patient’s bills and ensuring he is clothed and fed, I am reminded of the endless compassion that exists within us all.

A stroke (or cerebrovascular accident) occurs when the blood supply to the brain is either interrupted or reduced. This is considered a medical emergency and prompt treatment is crucial because brain cells deprived of both oxygen and nutrients begin to die within minutes. Signs and symptoms may include a slurred speech, blurred vision, a sudden, severe headache and unilateral facial paralysis that may extend to the arm or leg.

Dr Magnus Ekedede, one of the most intellectually prolific physicians of his generation, is a vastly gifted neurosurgeon. He has treated an innumerable number of Bahamians afflicted by this condition, including my own father. Since then, I’ve developed a great admiration for him as a physician and mentor, a respect that’s grown immensely over the years.

With regards to strokes, Dr Magnus (as he is known by Bahamians) asserts that a multi-dimensional treatment regimen involving medical treatment, surgical treatment and aggressive rehab must be employed for a successful outcome to be achieved. Physiotherapy, occupational therapy, speech therapy and psychological evaluation are a must. He stresses the harsh reality of the expenses. In the US, the cost of treatment for a patient who has suffered from a stroke can range from $250,000 at minimum to well over a million dollars.

Multiple sessions are required to get a patient back to pre-morbid conditions where they are able to regain strength, mobility and clear communication. Here in The Bahamas, this patient population is treated with equal measure and facility for a fraction of the cost. Dr Ekedede accordingly hopes more Bahamians will devote better attention to controlling their blood pressure because it’s so much easier to stop a stroke from happening than to repair the damage it inflicts.

The secret to ageing gracefully is balance; balance in stress levels, sleep, diet and exercise. If more Bahamians were capable of doing things in moderation and had the discipline required to consistently live a healthy lifestyle, I believe the health of our nation would improve dramatically. But until then, steady as she goes, one patient at a time – upward, onward, forward, together.

Nicknamed ‘The Prince of Podiatry’, Dr Kenneth D Kemp is the founder and medical director of Bahamas Foot and Ankle located in Caves Village, Western New Providence. He served as the Deputy chairman for the Health Council for five years and he currently sits on the board of directors for the Princess Margaret Hospital Foundation in his role as co-vice-chairman.