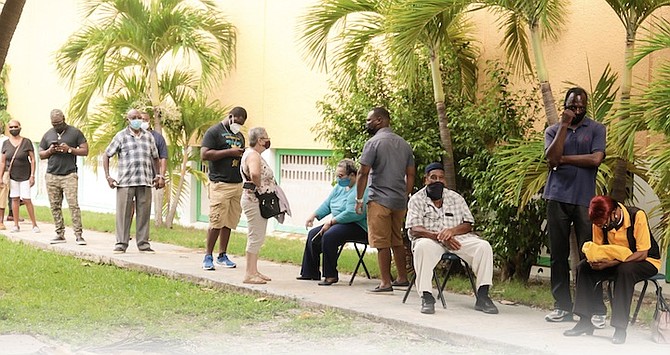 Tomorrow, we go to the polls. Well, some of us. I have heard from numerous people that they are definitely not going or are still very unsure about voting in the election due to the ongoing COVID-19 pandemic and the current raging wave of cases as well as the video evidence of an obviously disorganized advanced poll. For many, uncertainty turned into definite opt-outs when the announcement was made that people who are supposed to be in quarantine will also be allowed to present at the poll and vote alongside everyone else.

There is no disputing every registered voter must be allowed to vote. The issue is the process has not been designed in response to our current circumstances. We will have to wait to see the participation rate, but the failure to implement sufficient COVID-19 safety protocols along with frustration with the two major political parties who, yet again, do not have platforms outside of the usual “We’re not them,” will likely result in far too many people being left out of the process. It would be improper to call this choice when our health is on the line.

There was a time when an alphabetical grocery shopping schedule was announced in the attempt to reduce crowds inside and lined up outside of grocery stores. There was no Junkanoo, and there is no telling whether or not there will be Junkanoo this year. Weddings and funerals were postponed and now have a limited number of attendees. Students are attending school virtually. There is a curfew in place. Yet, somehow, it makes sense to the Prime Minister – the “competent authority” – to have an early election, and in the same fashion as previous elections.

There has been no innovation. There has not even been thought to the logistics of the process and creating a different and safer way for people to vote. Not even a drive-thru option for those in quarantine? Hand sanitizer and advising people to social distance are not sufficient measures to make participation in the electoral process safe for everyone. How will it all be enforced? How will long lines — and the people on them — be managed?

It is obviously on us to keep ourselves safe. If you are going to the polls tomorrow, take hand sanitizer with you. Wear two clean masks. Do not touch the cloth once you have the masks on. When you need to remove the masks, do so by using the strings at the back. Do not touch anything or anyone. Stand six feet away from other people and let people know when they are too close. Take as few items with you as possible.

Make sure you are hydrated when you get there. Take water with you. Check the weather before you go and determine whether or not you need an umbrella. Cue up some entertainment for the wait and be sure to have earphones. Noise-canceling headphones would be even better. We all know how easy it is to be sucked into other people’s complaints and how they tend to make you more aware of the heat, tired legs, slow-moving lines and every other negative aspect. They may be right, but it does not help you to hear it, so if you can escape through music, audiobooks, podcasts, or games on your personal electronic device, get them ready so all you have to do is press play.

Voting is important. All eligible people should be a part of the process. We should all be confident in the process and be able to participate safely. In the middle of a pandemic, this is beyond challenging, especially without proper planning based on our circumstances and the goal to encourage and accommodate the participation of every member of the electorate. It is clear that the latter was not and is not a goal. In fact, as has been the case before, there seems to be an attempt to dissuade people from voting. We are being told to show up and vote, but our needs are not being met. It is being made clear that it is on us to keep ourselves safe. Not everyone is prepared to take that risk, knowing that we have to rely on others to take precautions.

It is important to note party “diehards” will not stay home. They are going to show up to vote, no matter what. Those frustrated by the electoral process beyond the immediate circumstances were probably already minded to opt out, seeing no good options. If we want out of the current administration and if we want to avoid another supermajority, a large number of us need to vote for independent candidates. We need to get some of them elected. We have, in previous election periods, considered this impossible. This time around, it is even more challenging. If enough of us do it, we get more than just the PLP and the FNM in the House. If not enough of us do it, we may just “split the vote.”

We cannot predict the outcome. What we can do, however, is commit to ongoing participation in governance and understanding our role in a much broader way than casting a ballot every five years. We need to hold the next administration accountable. We need to make our demands clear. We need to be aware of the commitments the Government of The Bahamas has already made at the national, regional and international levels.

We can look, for example, at the commitments we have made — and not met — regarding women.

As it was in 2017, there is insufficient representation of women in the major parties’ slates of candidates. There has been no attention to the specific needs of women in their “plans” and they have demonstrated their lack of commitment to gender equality. The FNM manifesto says it has “more women as candidates” which is almost laughable because in 2017, only four of its candidates were women. “More” means very little, especially when the call for a quota has been clear, the minimum recommendation has been 30 percent. Seven out of 39 is a long way off.

The Bahamas ratified the Convention on the Elimination of All Forms of Discrimination against Women (CEDAW) in 1993. The State was not forced to ratify. It chose to do so, thereby acknowledging and accepting its responsibility to end discrimination against women. Its sixth periodic report was made in 2018. In its Concluding Observations, the CEDAW Committee said it “remains concerned about the low participation of women in political and public life, in particular in decision-making positions, which can be attributed in part to patriarchal attitudes, lack of such measures as statutory quotas or a parity system for political appointments, limited access to political networks, and insufficient capacity building programs for women in leadership and political skills.”

The Committee called on the State to “establish concrete goals and time frames for strengthening the equal participation of women in public and political life at all levels and create the conditions necessary for the achievement of such goals, such as implementing statutory quotas.”

The Committee acknowledged the transition from the Bureau of Women’s Affairs to the Department of Gender and Family Affairs, and it highlighted areas of concern including lack of human resources, weak institutional structure and the (continued) delay in adopting a gender policy and a strategic plan for the Department.

The Department of Gender and Family Affairs has faded into the background, failing to even engage with non-governmental organizations that are and have been at the forefront in the women’s rights space. Its monthly meetings seem to be a thing of the past, and it only seems to pop up when an international observation day rolls around. It is unclear whether or not the Department is responsive to critical issues such as women’s political participation and, more specifically, the lack of women being supported as candidates.

We do not hear the Department call for gender-responsive budgeting, or have any indication of its participation in such processes which is necessary to ensure gender is mainstreamed in all government ministries and departments and money is allocated for this purpose. Gender should not be isolated to one Department, but a primary consideration in all spaces and in the planning processes that impact the delivery programmes and other resources. As an example, with a gender perspective, hurricane relief efforts would include the provision of menstrual hygiene products, single women and children would be housed separately from men, contraceptives would be provided, and pregnant people would have access to healthcare services and appropriate nutrition. The needs of people who have been displaced would be anticipated and fulfilled without them having to individually make special requests.

In Treatment. A decade after season three ended, In Treatment is back. This time, Uzo Aduba plays Brooke, the therapist seeing three patients — home health aide Eladio whose employers pay for his sessions, recently released from prison for white collar crime Colin, and queer teenager Laila whose wise grandmother wants to control the process. Brooke’s on and off boyfriend shows up from time to time along with the shadows of their relationship issues. Brooke sees patients in a multi-million dollar Los Angeles home designed by her father. This show is a glimpse into therapy and how it can help people. Each patient has a different reason for being there, and Brooke serves as an advocate and a mirror for them, allowing them to see themselves and be able to ask for what they need. For Brooke, there is her AA sponsor Rita. In Treatment takes place during the COVID-19 pandemic, but it is not dramatically presented or frequently referenced. This gives the show the realistic feel without overwhelming viewers with the world we, quite frankly, would like to escape.

The Other Side of Paradise by Staceyann Chin. In this memoir, Staceyann Chin shares the circumstances of her youth, and she maintains a focus on herself. She manages to be honest and express her own emotions without casting blame, even when it seems blame is due. Hers is not the usual story of survival, but one of doggedness. She believed in her right to a good education, grand opportunities, and happiness. She pursued them all with little thought to what her efforts might look like to other people. She was unafraid of asking for what she needed, and being denied was of little consequence when she could ask again or try another way. This is her story of growing up in Jamaica, navigating complicated family dynamics, forging friendships, and finding her own path to freedom.

If you are easily affected by the sun, take an umbrella. If you're easily dehydrated, take a huge water bottle. Don't expect other people to do those types of things for you.....take good care of yourself tomorrow.

Doesnt Al Quaeda and Hamas put school children and hospital patients and staff in danger ny putting soldier bases in and around such places? Thinking enemies will be shamed not to attack there?

What kind of people put their citizens in danger in order to maintain power? Want to vote us out? Come face the virus. Canada doing the same thing 4 days from now.

I voted this morning. It the same as a food store line. Everything ran smooth. Guess we are used to social distancing and sanitary procedures.